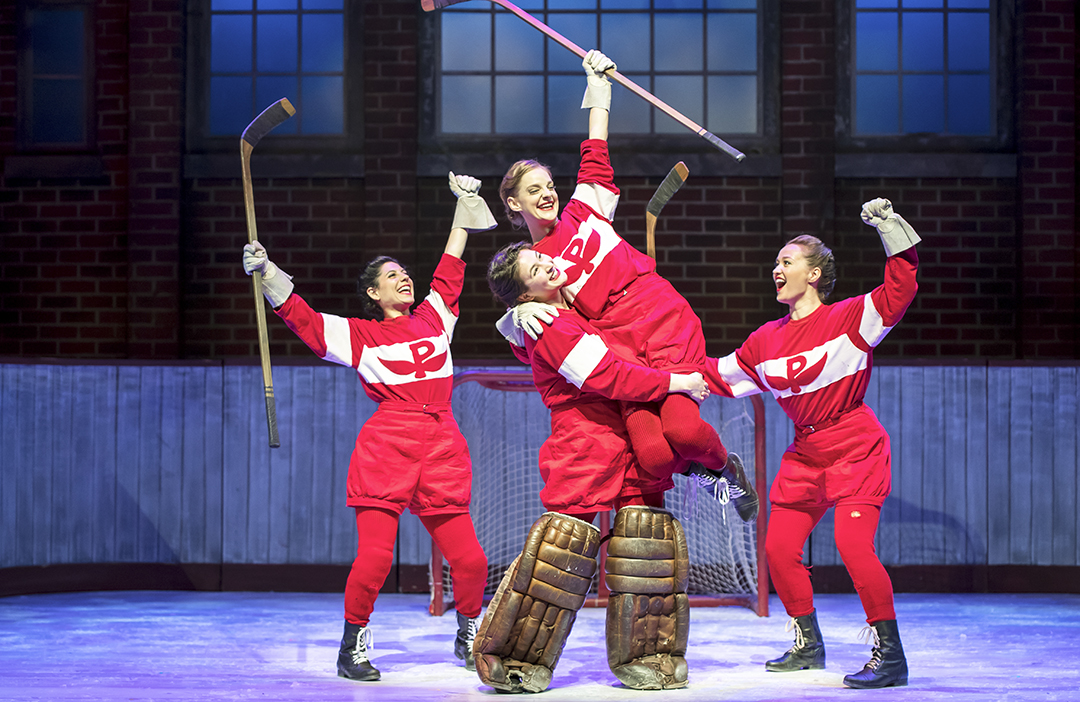 CAMBRIDGE – She shoots, and she does score in Drayton Entertainment’s latest production, Glory, on stage at the Hamilton Family Theatre until June 8.

Yet the inspirational story of Cambridge’s Preston Rivulettes women’s hockey team becoming one of the most successful hockey teams in Canadian history didn’t translate seamlessly into a stage production.

Set in the 1930s, the production follows two sets of sisters – Hilda and Nellie Ranscombe (played by Katie Ryerson and Morgan Yamada) and Helen and Marm Schmuck (Kate Dion-Richard and Advah Soudack) – who want to prove that women can play hockey too.

While the story of bringing women’s hockey to the forefront of the Canadian sports landscape is inspirational, the play by Tracey Power is missing a definitive antagonist and defined climax.

While each character has to face their own challenges, everything seems to happen more or less easily for the team. That left the audience looking for the adversity the team needed to overcome together.

Timing was also a challenge. It was unclear when years jumped forward and major life changes were treated in such a cavalier manner that it took the audience by surprise when events were casually announced in the general flow of conversation between characters.

Individually and as a group, Ryerson, Yamada, Dion-Richard and Soudack came together as true friends. Their connection was believable and appreciated.

Power, also the production’s choreographer, did excellent work creating the feel of skating with just the stage floor. The actors went so far as to pretend to “hockey stop” before stepping off the ice in every scene. That attention to detail wasn’t missed.

Early on, Nellie wasn’t the best skater on the team and Yamada portrayed her unsteadiness with skill and commitment. In fact, at one point Yamada’s bruises from her multiple falls were visible on her leg.

Many different dance styles were used to portray various aspects of each hockey game.

However, with a multitude of games played throughout the production, the dance moves became repetitive and the original excitement and intrigue fizzled as the audience anticipated what move was coming next.

Andrew Wheeler played gruff coach Herb Fach who had his own demons to overcome as he took on a women’s hockey team that even he didn’t believe in.

Through his demeanor and even his costume changes, it was palpable how the character evolved throughout the production.

Wheeler did an excellent job using his voice, intonation and body language to move from intense dislike to appreciation and respect of the women he’s coaching.

Set and lighting designer Narda McCarroll transformed the simple half rink set into many different scenes, including a baseball diamond, a locker room, a living room and a train car to name a few.

The actors were responsible for transforming the set from scene to scene and did so casually and without getting in the way of the main scene that would often occur in conjunction.

Director James MacDonald expertly set the play so each actor effortlessly knew exactly where they needed to be at what time.

During one scene all five actors are on a train; while the spotlight is only on one or two characters, all actors are moving in a way that makes it look like they are really on a moving train. The attention to detail was tremendous.

While it was easy to see where sound designer Steve Charles was going, at times it was very difficult to hear what was being said on stage. With microphones positioned above the stage, rather than dedicated to each individual actor (an understandable decision as on-stage wardrobe changes were common), there were areas of the stage where voices were lost and even those sitting in the first 10 rows had to strain to hear what was being said.

A 1930s-style radio sound was also used frequently throughout the production. While the ambience really set the scene, the old-style sound also made it difficult to pick up on what was being said, which was unfortunate as many of the radio announcements were pivotal to the overall plot of the play.

Despite its shortcomings, Glory is an inspirational story that every hockey player, young and old, is sure to enjoy.

Even those who are not hockey fans will find the fight to bring women’s hockey to the forefront exciting and uplifting, especially when the team was formed so close to home.

Glory, created by Western Canada Theatre, is on stage at the Hamilton Family Theatre Cambridge until June 8.

Tickets are $48 for adults and $29 for youth under 20 years of age. Tickets for groups of 20 or more and selected discount dates are $39. HST is applicable to all ticket prices.