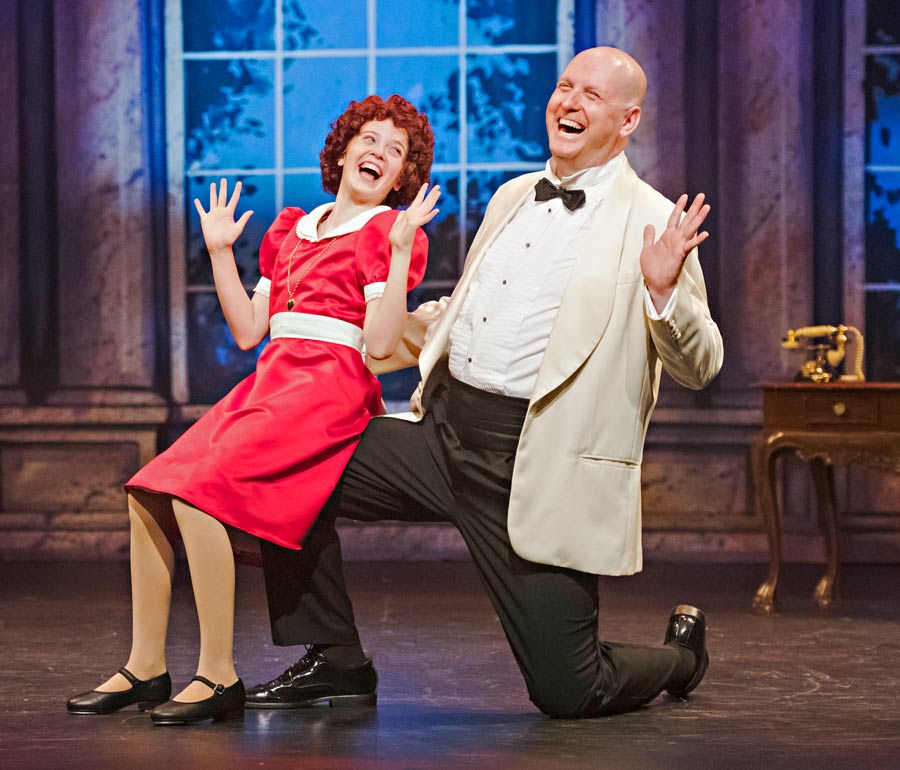 Annie - Drayton Entertainment’s production of the hit musical Annie is running until June 30 at the Drayton Festival Theatre. ABOVE: Riley DeLuca as Annie and Thom Marriott as Oliver ‘Daddy’ Warbucks in Annie, Drayton Entertainment, 2019 Season. Photo by Hilary Gauld Camilleri

DRAYTON – There is a certain sense of responsibility to putting on a production of a beloved classic like Annie.

Drayton Entertainment’s show at the Drayton Festival Theatre on June 7 delivered on the magic of the original 1977 Broadway hit, by Thomas Meehan, Charles Strouse and Martin Charnin.

The audience was filled with families and young children and as a first experience of the story, Drayton Entertainment did them no disservice.

In comparison, however, some of the transitional scenes, through which the story pivots and some of the big numbers are made poignant, felt forgotten. In these small moments the production seemed to rely a little too heavily on the audience’s presumed familiarity with the story.

Many will know the story of the endearing redhead who teaches generations about the power of positivity – either from countless renditions of original Broadway show, or the popular 1982 film.

Set in 1933 during The Great Depression, Annie is an orphan living in an orphanage for little girls in New York. The orphanage is run by Miss Hannigan, an alcoholic and a flirt who laments having to be a caregiver of little girls. Annie is desperate to get out of the orphanage and find her family.

In her attempt, the opportunity presents itself to live with billionaire Oliver Warbucks who, beguiled by Annie, takes it upon himself to help Annie search for her parents.

Riley DeLuca was a pitch-perfect Annie and a delight to watch. She carried audience favourites like the Tomorrow number with precision – even while having to steer the audience-curious and adorable Sandy the dog, played by Charlie The Wonderdawg.

DeLuca gave the role a sense of maturity and, at times introspection, which made the mutual respect Annie receives from the adults around her seem believable.

However, certain intricacies of some of the major characters’ relationships lacked clarity. It remained unclear why Miss Hannigan specifically dislikes Annie.

In the scene during Act One when Warbucks’ assistant Grace Farrell (Cynthia Smithers) comes to the orphanage it is unclear why Miss Hannigan specifically offers Farrell any other child other than Annie. Her agitation at Annie for having run away intellectually seems like the obvious answer but Ranney’s portrayal didn’t seem to suggest that.

Similarly, it was unclear why Farrell takes to Annie so quickly. The scene itself was perhaps too fast-paced to really capture the unspoken interaction and characters’ internal decision-making.

The relationship between Oliver Warbucks, played by Thom Marriott, and DeLuca’s Annie was full of believable, heart-warming paternal love.

Perhaps it was a conscious choice, either by Marriott or director David Connolly, not to play up Warbucks’ austerity when he first meets Annie. But a small choice like that limits some of the enjoyment the audience should receive later from seeing him warm to Annie gradually.

Small distractions aside, the cast and crew of Drayton Entertainment’s Annie did the beloved story justice.

The show is on stage at the Drayton Festival Theatre in Drayton until June 30. Regular performance tickets are $48 for adults and $29 for youth under 20 years of age. Tickets for select discount dates and groups of 20 or more are $39. HST is applicable to all ticket prices.

Tickets can be purchased online at www.draytonentertainment.com, in person at any Drayton Entertainment box office, or by calling toll free at 1-855-372-9866.