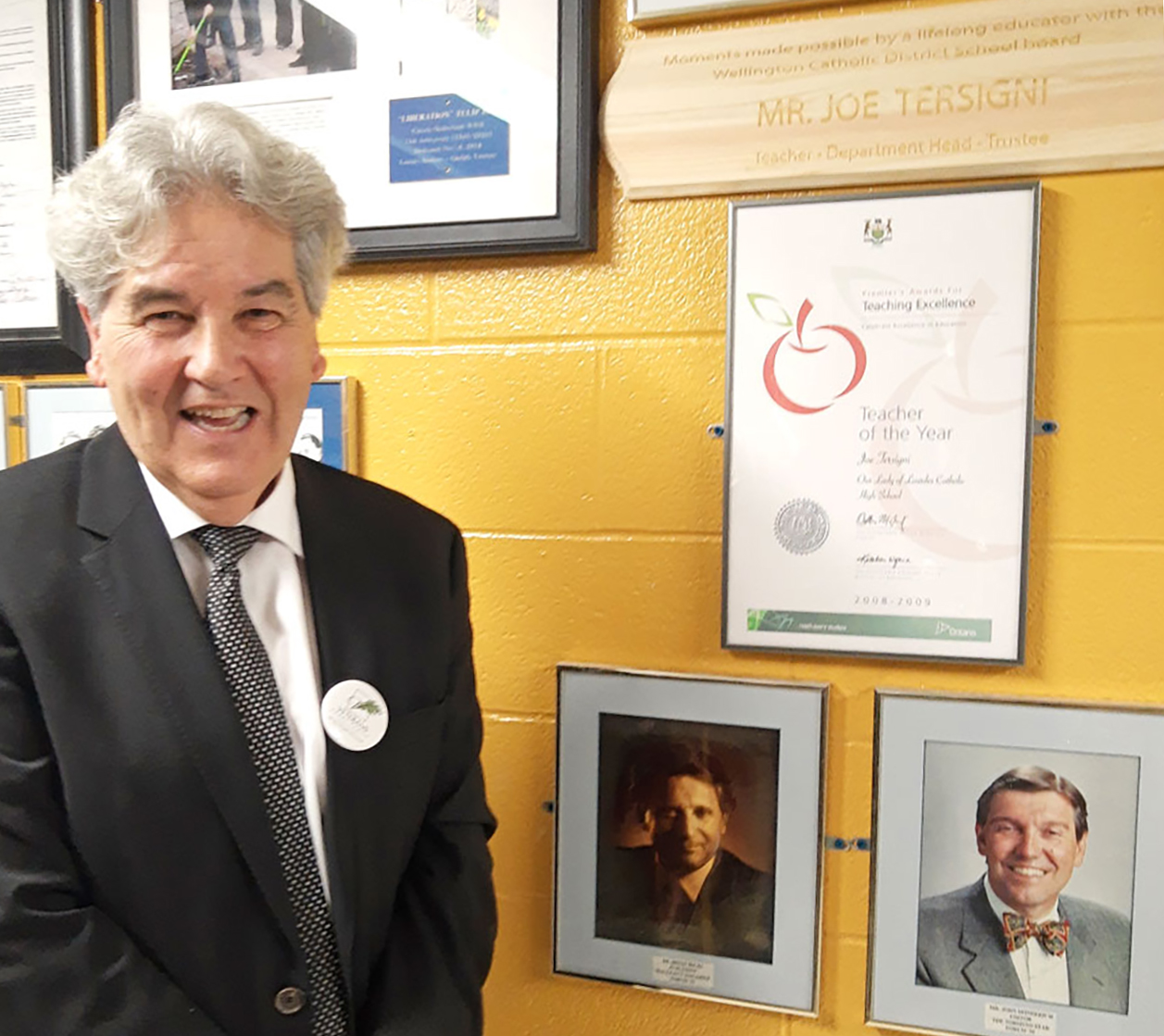 Joe Tersigni Received the National Leadership Award from Our Lady of Lourdes Catholic Highschool on Sept. 16 - the very award he created more than 30 years ago. Photo by Joanne Shuttleworth

GUELPH – It was more than fitting that the creator of the Our Lady of Lourdes Catholic High School’s National Leadership Award would actually receive the honour himself.

Joe Tersigni, retired teacher and head of world studies for decades at the school, received the award at a ceremony on Sept. 16 in what one student called “a Disneyesque circle of life.”

Tersigni was lauded for his character, his integrity, and for being an extraordinary teacher.

“You deserve this award more than anyone I know.”

Tersigni was born and raised in Guelph and started his career in broadcast journalism.

He said it was while covering education stories that he started thinking about becoming a teacher himself.

He taught at Bishop Macdonell high school in Guelph and then Lourdes in a teaching career that spanned 34 years.

He is now a trustee with the Wellington Catholic District School Board and continues to work with war veterans at the Royal Canadian Legion Branch in Guelph.

He said it was in 1991 when a student suggested bringing in some of the high-powered and highly recognized Canadians Tersigni had mentioned in class.

The lobby at the school is lined with photos of past winners.

Tersigni said over time he recognized common themes in the speeches of past winners and those were the themes he stressed in his own speech to the students – dream big, work hard, be kind, never be afraid to make mistakes, and remember your roots.

“It touches my heart to receive this,” he said.

The school also unveiled a wall featuring historic moments in the school, and it was named in Tersigni’s honour.

“These were important historical events at the school, and you are the inspiration for all these moments,” said vice principal Brian Halford.

Paul Zuccala, formerly a Tersigni student, is now the head of Canadian and world studies at the school and he is continuing the National Leadership Award tradition.

The school put a pause on the award during the pandemic, and Tersigni’s was the first given since 2019.

“It feels great to do this, and especially for Joe,” Zuccala said.

“Some people call themselves ‘self-made’ and we all need to bring forth our special qualities. But Joe knows we all stand on the shoulders of those who came before us. That is the spirit of the awards.” 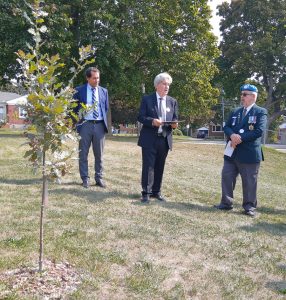 Outside the school, Tersigni shared the story of the Vimy Ridge Tree planted on the school’s boulevard. It’s an oak sapling right now, but the hope is it will grow to be as large as its storied past.

In 1917 at Vimy Ridge, a Canadian soldier pocketed a handful of acorns. People, homes, roads and bridges were all decimated in that battle and many trees did not survive either.

The acorns were planted at the soldier’s home in Scarborough and in 2015 arborists took cuttings from the trees, grafted them to base root stock to create saplings. The Vimy Foundation planted many of those saplings in Vimy as a legacy project and some made their way to Legions across the country.

The Guelph Legion received one and in 2018, veteran Jacques DeWinter removed an acorn from that tree, planted it in his own yard, and in 2020 donated the sapling to Lourdes.

“I hope it’s a reminder that freedom is never free,” DeWinter said.

“I dedicate it to those who gave their lives for freedom.”