Carl “Eno” Kraft, 80, of North Branford, Connecticut, passed away peacefully at home on June 26 with his family by his side.

Kraft started playing hockey for the Guelph Biltmore Mad Hatters in his teens and his love of the game led him to a professional hockey career in the U.S. where he played for the New Haven Blades, among other teams.

He stood 5’6” and had a reputation as being a “scrappy” player. He loved the energy of the fans and enjoyed being an instigator on ice.

The highlight of his hockey career was winning the 1967 Turner Cup with the Toledo Blades. It was for this that he and his teammates are honoured in the Hockey Hall of Fame.

After retiring from hockey, he went on to spend most of his years working for Copa Tire, which ultimately became like extended family. In addition, he held the position as inside sales rep for various construction companies and gained some long-lasting friendships. 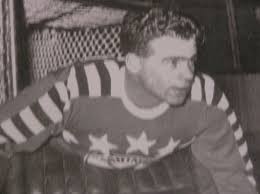 His sister Evelyn Morrissey said he was always an active kid who loved sports of any description.

“I remember going to the quarry and he’d dive right in. Not me though. I was afraid of falling in,” she said when reached by phone at her home in Ajax.

Morrissey said hockey pretty much shut down during the Second World War, “but he got an opportunity. He didn’t get started till later in life, but he loved it.”

Morrisey said she had a real conundrum in 1967 when her brother was playing for the Turner Cup at the same time the Toronto Maple Leafs were playing for the Stanley Cup.

“Sorry to say I watched the Leafs,” she said with a laugh.

“We were very proud of him and I remember listening on the radio for the Hockey Hall of Fame ceremony.”

He made his life in the States but loved to visit Elora, Morrissey said, adding he was last there for her 80th birthday six years ago.

She would regularly visit him in Connecticut as well.

This year’s planned trip in May was cancelled due to COVID-19.

Morrissey said he had a stroke 14 years ago and life became more restrictive for him.

But he was a jolly man, a great friend, a second dad to the neighbourhood kids, the first on the dance floor and the last to leave.

“He never wavered from who he always was, and will forever be remembered for his smile, sense of humour and kindness. He was truly one of a kind,” she said.