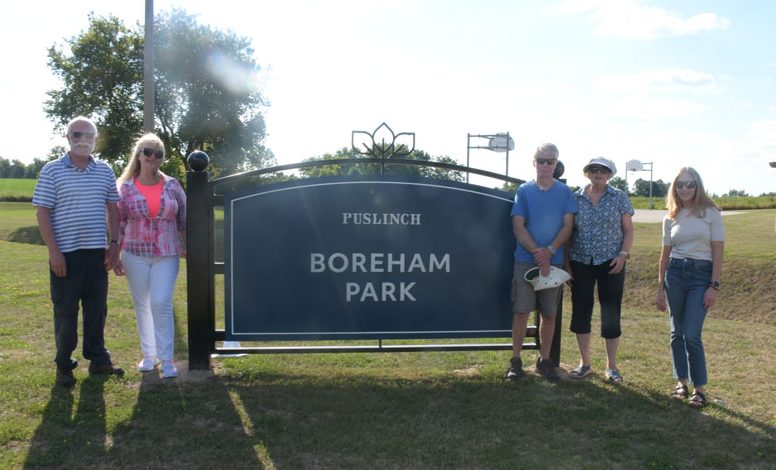 Some residents in Arkell are unhappy with council's decision to make improvements to Boreham Park. They wish they'd been consulted, they say. From left: Bruce Taylor, Elizabeth Cantwell, Wayne and Joan Hodges, and Marny Mason. Photo by Joanne Shuttleworth

ARKELL – Several residents in Arkell are upset that Puslinch council has approved an improvement plan for Boreham Park, claiming decisions were made without input from residents.

They are holding a public meeting on Sept. 11 at 7pm at the park to discuss the plan, hear from residents and then bring their findings to council.

They also hope councillors and the mayor will attend.

Six residents met with the Advertiser at Boreham Park on Aug. 18, and while they all agreed the playground equipment there could use an upgrade – currently there are four swings and one metal slide on a sand base – some local residents worry the park, with new upgrades, will attract people from out of town.

There is no parking lot at the park. The only parking is on Boreham Drive, which is a residential street with no curbs or sidewalks, and it is not designed for on-street parking.

The park is not large and is surrounded by and divided by drainage ditches, that dip eight feet deep in some areas.

Local resident Bruce Taylor said drainage needs to be addressed before anything else.

“Instead of an underground drainage pipe, over 1,000 feet of ditches run throughout the whole park, from south to north and east to west,” he said.

“First the ditches need to be filled in, so the park is level, and the park sloped and drained properly.”

Taylor added people on the street refer to the back corner of the park as “Lake Arkell” during the spring snow melt period.

And leaving the ditches in place means the park is divided into quadrants that are difficult to cross, that impede play, and that make the park inaccessible according to the Accessibility for Ontarians with Disabilities Act.

“We want a nice little park,” he said. “It must be child friendly and accessible.”

Resident Marny Mason said when the park originally opened, there was just a swing set, “and the kids wanted basketball nets.”

Mason said she was part of the group that worked with the Optimist Club and sponsors and now there is an asphalt pad with two basketball nets, which “are really well used.”

That’s the kind of engagement she expected to see before reading in the newspaper that the decisions regarding the park were already made.

Taylor also believes there should be a master plan, a site plan, and a tree plan before any tax dollars are spent on improvements.

“They put the cart before the horse,” he said. “There’s no master plan for the park, no site plan for any structure and no tree plan for shade.

“That’s what people are saying should come first.” 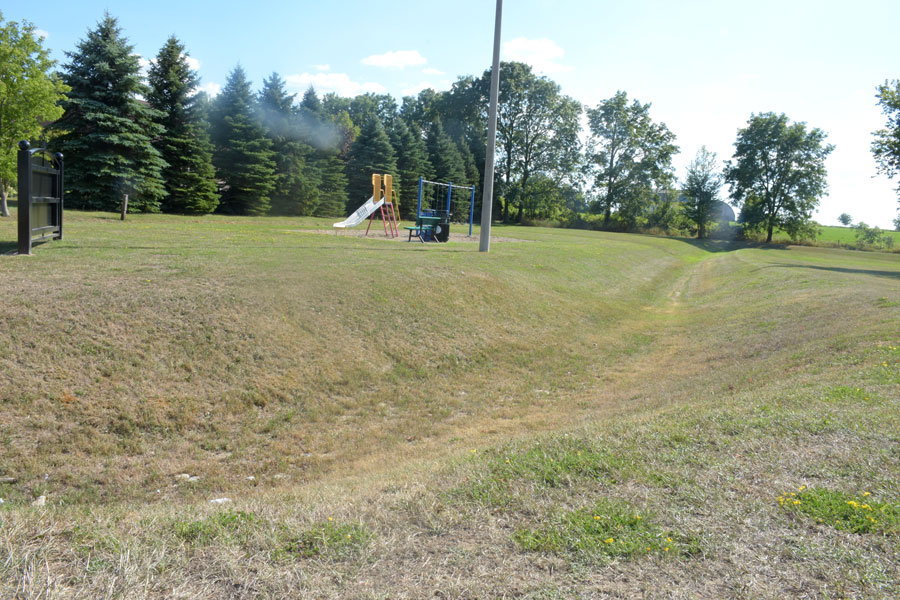 Drainage ditches run around the perimeter and right through Boreham Park. Some local residents say drainage needs to be addressed before adding a new play structure. Photo by Joanne Shuttleworth

However, the township does have a Recreation and Parks Master Plan, which was created in 2015 by Monteith Brown Planning Consultant.

The master plan looked at all recreation facilities in Puslinch – including the Puslinch and Badenoch Community Centres, the Optimist Recreation Centre, small parks like Boreham, trails, cycling trails, and recreation programs.

The master plan outlines several engagement opportunities that were completed in 2014 and 2015: a public open house, a public meeting and online surveys, as well as surveys for user groups, community associations, volunteer organizations and local agencies.

Chief administrative officer Glenn Schwendinger stated in an email the township also reached out for more public comment this spring.

“We ran a “Young Playground Planners” project where citizens could submit their dream playground ideas. This engagement opportunity ran from [April 1 to 22, 2022],” he wrote.

The township advertised the engagement opportunity on its website and its new portal, Engage Puslinch.

“With respect to analytics of this specific engagement, during this time we had 119 visits to engagepuslinch.ca and we had 23 unique ideas put forward and 68 ‘votes’ towards the various ideas,” Schwendinger stated.

“This was a very successful engagement overall.”

Schwendinger said the township is happy to receive ideas from residents, but the project design for Boreham Park is complete.

“This project design is pretty much set for this particular project, given that the approved design was used as the basis for a funding application through the Ontario Trillium Foundation,” Schwendinger wrote.

“If the township were to stray from the approved design, $150,000 in funding would be at risk, which would then need to be made up through other sources including tax revenue.”

However, there could be room for more improvements in the future.

“There is always the opportunity to add features or undertake new projects in the future,” Schwendinger stated.

“The process to do this, like any other project at any facility, would be to put together a proposal, options, cost estimates and funding solutions (including grants, donations, etc.) for council to consider during the annual corporate budget preparation process.”

The township’s plan for Boreham Park includes a new play structure, a climbing structure and a shade structure and picnic tables, at a cost of $208,882.

Council approved the project, plus improvements to the Puslinch Community Centre on July 13.