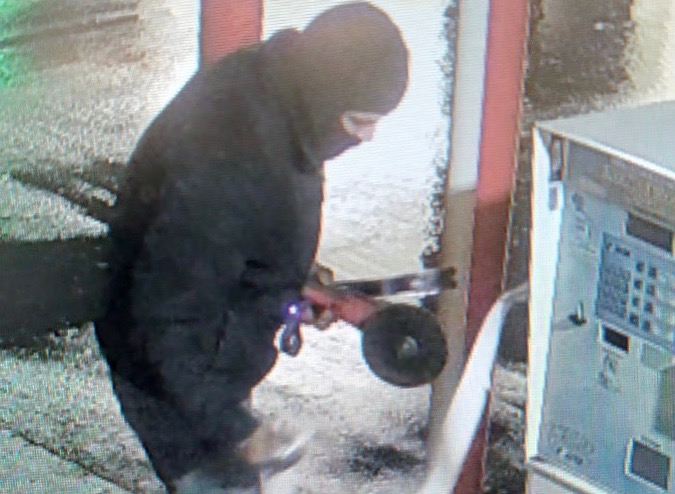 This alleged thief was caught on surveillance cutting into a change machine at a car wash on St. David Street North in Fergus on Nov. 25. Police say he stole a quantity of change and caused about $30,000 in damage. Wellington County OPP photo

WELLINGTON COUNTY – It was mere days after Michelle and Tim Thalen purchased the Mount Forest car wash in 2020 when a thief hit.

The cash receptical on the vacuums was cut and the change inside stolen.

The Mount Forest location was then hit a second time, in September this year.

Another car wash owned and operated by the Thalens, this one in Harriston, was hit the same month. Someone – police won’t say if they’ve identified any suspects – broke into the building, looting the change machines.

More recently, on Nov. 4, the Harriston location was hit again. The payment teller for the drive-through wash was cut into with a grinder and the bill collector stolen.

Those are just thefts at the Thalens’ locations in northern Wellington. One of their carwashes in Listowel has also been robbed twice.

The Quick Splash Car Wash in Shelburne was also recently robbed, and closer to home, the Sparkle Brite Car Wash in Fergus was robbed last week.

“It is honestly out of control,” Thalen remarked by phone.

Wellington OPP spokesperson Joshua Cunningham was unable to provide the Advertiser with the number of car wash thefts the service is investigating because that specific data can’t be queried.

Cunningham was also unable to answer questions from the newspaper about trends in car wash thefts, but stated, “There are fewer and fewer unattended, cash-on-site [businesses].”

“They drill all the locks out, they have a grinder, and they cut into the boxes, they destroy the security systems and they walk out with the cash,” Thalen explained.

But the car wash owners haven’t seen a method recently used by thieves “where they’re cutting holes through the stainless [steel] with grinders and pulling out the cash stacker units and walking away with them.” 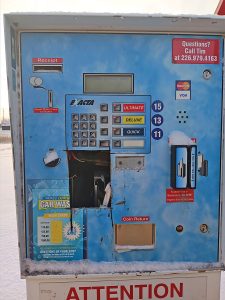 The bill stacker was cut out of this car wash teller machine in Harriston in early November. Submitted photo

During the Harriston theft in November, the thief was cut and bled on the teller machine.

For all the fuss and wounds, the thieves aren’t getting much.

Thalen predicts that person would have stolen $500 at most.

“They don’t actually steal a lot of money, what they do is create major, major costs in equipment,” she said.

New machines cost tens of thousands of dollars and are imported from the United States, taking months to arrive.

“Everybody in the power-wash world isn’t jumping to buy new equipment,” she remarked.

But for the Thalens, something has to give.

“It’s not changing, and it won’t get better,” Thalen said.

New tellers ordered because of the damage are costing the couple roughly $100,000 across all their locations.

And in response, they’ve decided to eliminate cash from all their drive-through car washes.

The decision has generated pushback from some in the community.

“We got people mad at us because [the tellers] can’t take cash,” Thalen said.

For now, the damaged machines are taped up and credit card payments are being accepted until the arrival of replacements, which will accept all cards and tappable payment methods.

Thalen is unaware of any arrests in the northern thefts and said police haven’t provided her with any updates.

At the Harriston location last month, Thalen said police took samples and prints from the machine, but what police will get out of it she doesn’t know.

Cunningham declined to confirm what he called “evidentiary information” but said collection of DNA and fingerprints is used in investigations.

The issue, as Thalen sees it, is the legal system doesn’t penalize people when they are caught.

“They keep coming back,” she said. “It’s super frustrating. It’s happened enough that we’re becoming a little bit numb to it.”