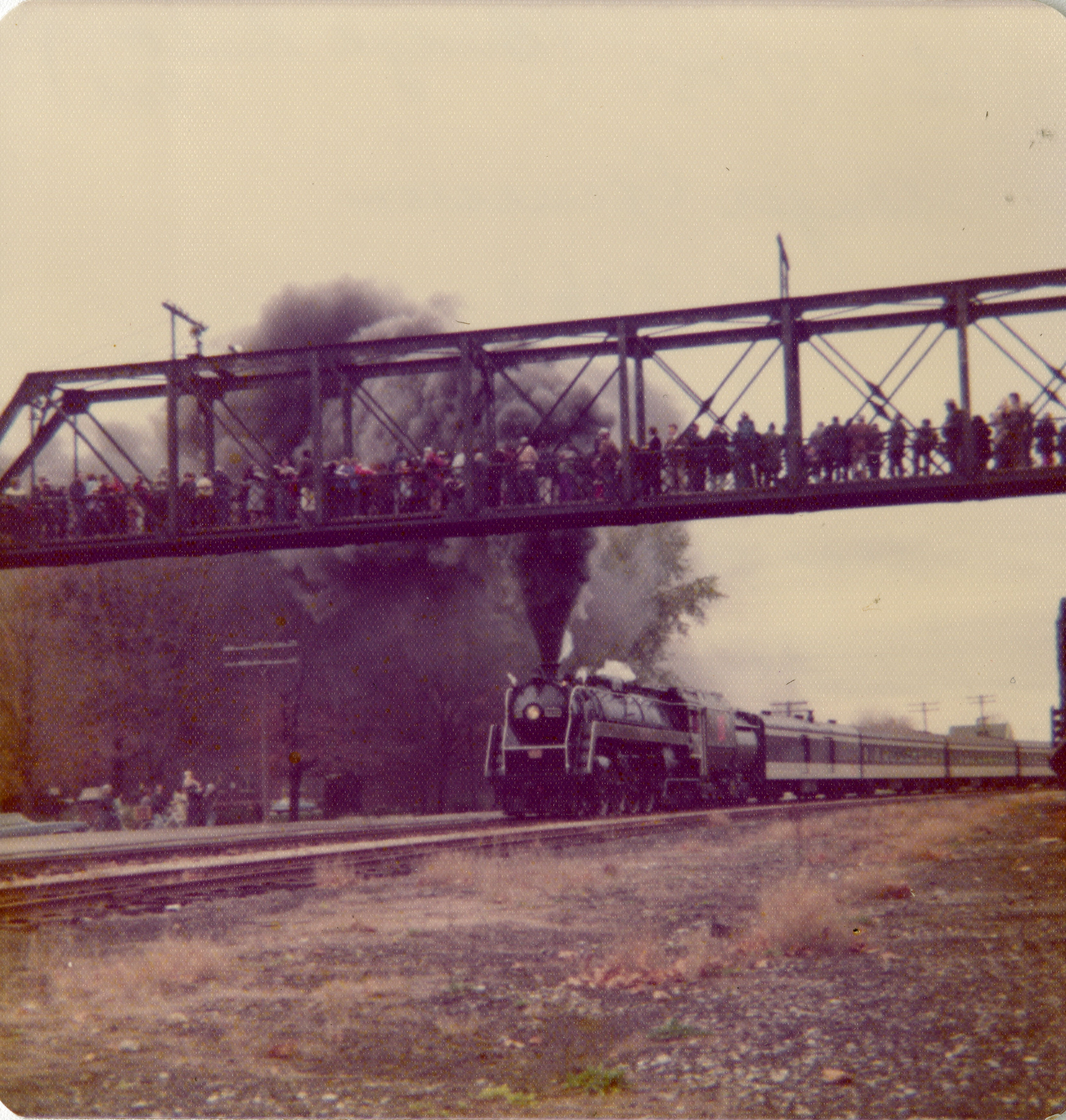 Palmerston run past - Paying passengers from the train augmented the crowd of local residents as CN number 6060 strode noisily past the Palmerston station under a cloud of oily black smoke and a plume of steam. Those standing over the track on the footbridge choked on the exhaust to pay for occupying the best vantage point in town. The date is Oct. 18, 1975, and the visit by 6060 and its 10-car train brought back memories of Palmerston’s heyday for many of those present. Wellington County Museum & Archives ph 52899_2_028

On June 13, Canadian Pacific’s restored steam locomotive paid a fleeting visit to Wellington County when it passed through Puslinch on CP’s main line.

A number of readers of this newspaper undoubtedly took time to see this rare steam excursion. Perhaps a few were even on board.

A generation ago, steam powered railway excursions were fairly common. Canadian National ran them from 1960 until 1980, using locomotives 6167 (which is now on display in Guelph), 6218 and 6060. All three visited Wellington County several times during those years.

Recently, a fan of this column sent me a photo of 6060 in Palmerston, and wanted to know more.

The picture was taken on what was, perhaps, the most memorable steam excursion by 6060 to Wellington County. The date was Oct. 18, 1975. The Upper Canada Railway Society sponsored that trip, which left Toronto’s Union Station at 8:30am. Locomotive 6060 hauled nine cars of passengers, plus a baggage car fitted with 110 volt power for the railway fans who wanted to make tape recordings of the trip.

The itinerary took the train to Guelph, Kitchener and Stratford. There, it turned north to Palmerston, where it reversed again, to return to Toronto through Drayton, Alma, Fergus, Elora and Guelph.

The locomotive, number 6060, was one of the last series of steam locomotives purchased by Canadian National. The Montreal Locomotive Works built the engine in October 1944, and it spent most of its service life hauling fast, heavy mainline passenger trains until it was retired in 1959. The engine weighed 318 tons, and measured 93 feet long. To railway personnel, it was identified as a 4-8-2, or Mountain type. Graceful in proportions, the locomotive had a smooth boiler, with a rounded front, giving it a “bullet nosed” appearance.

After retirement, CN had placed the engine on display at Jasper National Park in 1962. Ten years later, railway officials decided to restore it for excursion service as a replacement for locomotive 6218. The main reason was that 6060 burned oil, rather than coal. By the 1970s, refueling coal-burning locomotives had become difficult and often arduous when it was necessary in the middle of a trip. With oil, a delivery truck and hose could quickly top up the fuel tank. And it took a lot of oil: 6060’s tender held 5,000 gallons of it, along with 10,000 gallons of water.

The Oct. 18 excursion had no definite schedule. The special run had to avoid regular trains on the line, and it stopped several times to let some of the passengers off, backed up and then ran forward so that passengers could take photographs. The sponsoring group expected to arrive in Palmerston at 1pm or a little after.

A big crowd assembled at Palmerston to see the train there. In 1975 there were still many locals who had worked for the railway, or who had close connections to it. As well, many came from out of town to see and photograph the train.

The crowd, which swelled to more than 500, had a long wait. The excursion special did not arrive until after 3pm. The first order of business was servicing of the locomotive. A fuel truck topped up the tank, and Palmerston’s firefighters helped with replenishing the water. They hooked up two hoses from a hydrant to their pumper, and from there to the engine. They had the tender filled efficiently in a few minutes.

Then it was time for the show. The train pulled past the station, then backed up toward Harriston, and out of sight past Main Street and more than a mile farther, to the Second Concession of Minto. Many of the passengers had stepped off the train with their cameras. About 200 people crowded onto the pedestrian bridge for the best view.

The engineer and fireman on 6060 that day were both showmen, and they were determined to give Palmerston a good performance. As the train proceeded back to Palmerston, the engineer pulled steadily on the whistle cord, using the stream whistle like a musical instrument. When properly fired, 6060 generated very little smoke. But when the train neared the Main Street crossing, the fireman overloaded the firebox with fuel oil, sending a geyser of thick black smoke out the smokestack.

He increased the effect by tossing a couple of shovels full of sand into the firebox. This had the effect of scouring the flues, and loosening the soot. The train continued toward and past the station under a dense cloud of black smoke.

Those standing directly over the track proved themselves to be either daring or foolish, as they were enveloped in the hot thick stream. The train slowed as it neared the station. The fireman had the steam pressure up to the maximum.

That resulted in the safety valve opening, and a jet of white steam shooting skyward in a deafening roar to contrast with the smoke.

Just past the station, the engineer opened the throttle quickly. That made the driving wheels spin furiously, accompanied by loud exhausts of steam. As well, he had the valve gear adjusted so that he was using much more steam than necessary, which increased the sound effects tremendously.

The train slowed to a stop southeast of town, then backed up again to Concession 2 of Minto a second time for a repeat performance. The crowd loved it. Art Carr of the Palmerston Observer was astounded at the amount of photographic, recording and video equipment set up at the station and along the route through Palmerston. He guessed the value at $500,000.

Spectators shot thousands of photographs that day in Palmerston, and many of these, after 28 years, are now family keepsakes to be shown to those of a younger generation who never saw a train of any kind in Palmerston.

After the second run-past, the train backed up yet again to the Palmerston station, and the paying passengers got back on board for a leisurely return to Toronto, and a memorable visit to what had once been a major rail junction on the Canadian National system. Some of the locals hung around for a while, listening when the train whistled for the crossroads through Maryborough and past Moorefield.

I believe that the 1975 trip was the last steam excursion to pass through Palmerston, and the last passenger train of any kind.

Regular passenger service had ended five years earlier, on Nov. 1, 1970. The line to Fergus remained in place until 1983, used in later years only by the oil train to Douglas Point.

As for 6060, the locomotive remained in Canadian National steam excursion service until 1980, when the railway presented it to the province of Alberta. More recently, it has undergone a second restoration, and is now under the care of the Rocky Mountain Rail Society, and based in Stettler, Alberta.

That group still runs the locomotive in excursion service, mostly on a short line from Stettler.

Old No. 6060 is operating there this weekend, still putting on a good show as it nears its 60th birthday.

*This column was originally published in the Advertiser on July 11, 2003.