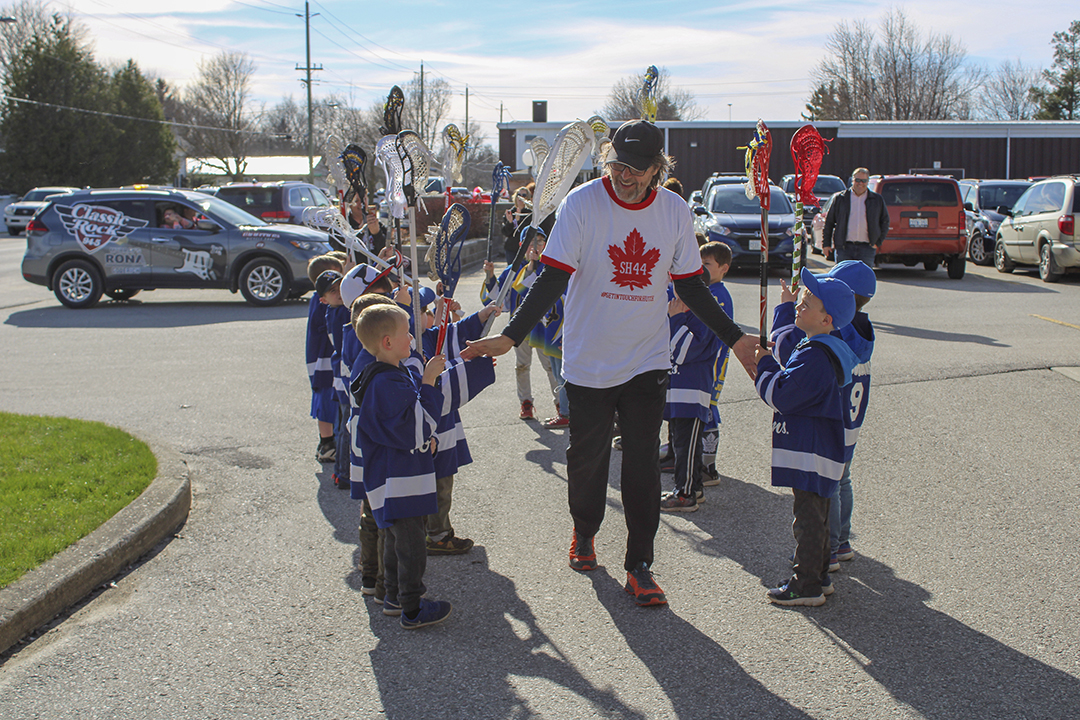 Run Phil Run - Phil Main from Classic Rock 94.5 received high fives from Arthur Aces lacrosse players after he ran from Wellington Heights Secondary School in Mount Forest to the Arthur Community Centre on May 7. The station teamed up with local organization Get In Touch for Hutch to raise awareness about mental health. Photo by Aryn Strickland

The run was part of the five-day “Run Phil Run” campaign, which started May 6 in Blyth and will end May 10 in Kincardine.

Main reached the Arthur community centre at 6pm and was met with high-fives from minor Arthur Aces lacrosse players.

“That was a hard one today. A lot of gravel. Not as much fun to run on, but I feel great,” said Main of the day’s run.

“It’s the community that fires me up and when a bunch of people come together to do something good, then it’s all good.”

Main’s Wellington North leg of the journey ended with a packed family-friendly  event hosted by local mental health organization Get in Touch for Hutch.

A portion of the proceeds from the event will go to Get In Touch for Hutch, but the organization’s main aim was to raise awareness about mental health, the organizer explained.

“It is an awareness event more than fundraising event and we just really look forward to opening things up and having the community coming to join us as part of this campaign,” said Get In Touch for Hutch founder  Myrna Hutchison.

“It is mental health week this week and for us if we can talk about it every single day it wouldn’t be enough.”

Organizing the campaign began in the fall, when the radio station was looking for  a way to help raise awareness of the issue among youth in time for mental health awareness week.

“It sort of stemmed out of some mental struggles that I had eight or 10 years ago and the way that I dealt with it was to walk and run … and then just connections with people who have lost a son or a daughter,” said Main.

“There were three of them that came in a rather close proximity in the Wingham area and it just gutted me to see what the parents were going through.”

He added, “I said, ‘What can we do’ and we decided to do this. Do something crazy and people will notice – and we want them to notice Get In Touch for Hutch because they are such an amazing group.”

Main explained it is important for those struggling to have someone to turn to, which is why he is excited to partner with Get In Touch for Hutch in Wellington North.

“When I was going through my struggles I had a buddy who just walked with me,” said Main. “That’s all he did. He never tried to fix me. He was just there and that’s what Myrna is doing; they’re just there and I think that’s what kids need.”

For Hutchinson’s organization the goal of every event is to end the stigma surrounding mental health.

“You never know who is struggling with mental health concerns and I think what we need to do is make it comfortable enough so everybody’s ready to talk about it whenever they want to.”