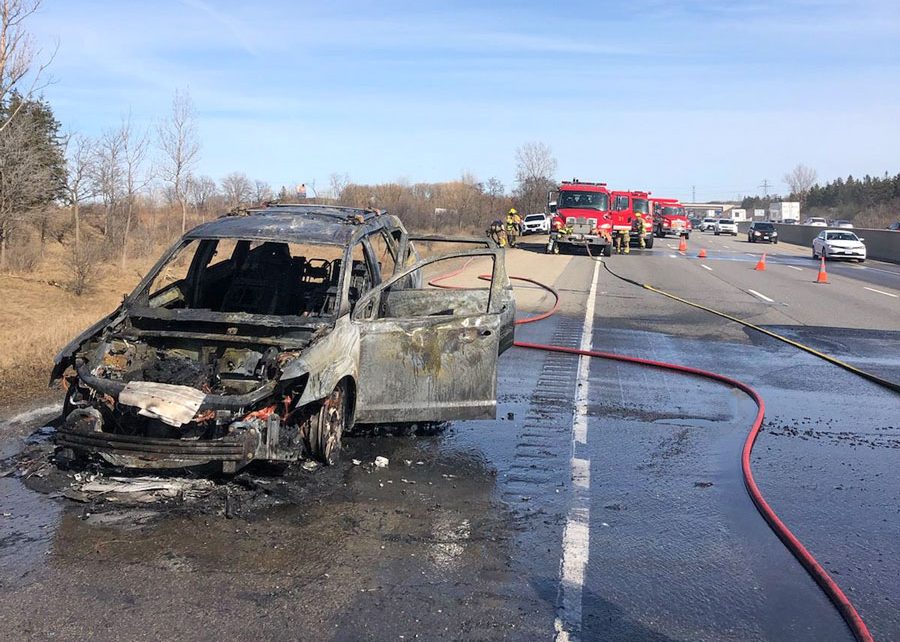 This vehicle is a write-off but no one was injured in a car fire on the 401 on Sunday afternoon. (Puslinch fire department Twitter photo)

PUSLINCH – The Puslinch fire department responded to a 911 call from a car on Highway 401 on Sunday afternoon and arrived to find the car fully in flames.

Interim fire chief Brad Bigrigg said the call came in at 3:22pm on March 20 and crews were on the scene by 3:30pm.

“The driver of the Dodge Journey smelled burning under the hood and pulled off the highway and called 911,” Bigrigg said.

The vehicle was in the westbound lane between Brock Road and Concession 7.

Almost at the same time, Cambridge firefighters responded to a motorcycle accident in the eastbound lanes of the 401 between the Hanlon Expressway and Highway 6 south, which led to some confusion as to who was where and what was going on.

Traffic was snarled for longer than it took to put out the fire, Bigrigg said, adding his crews returned to the station within the hour.

No damage estimate was available but Bigrigg said the car is a write-off.