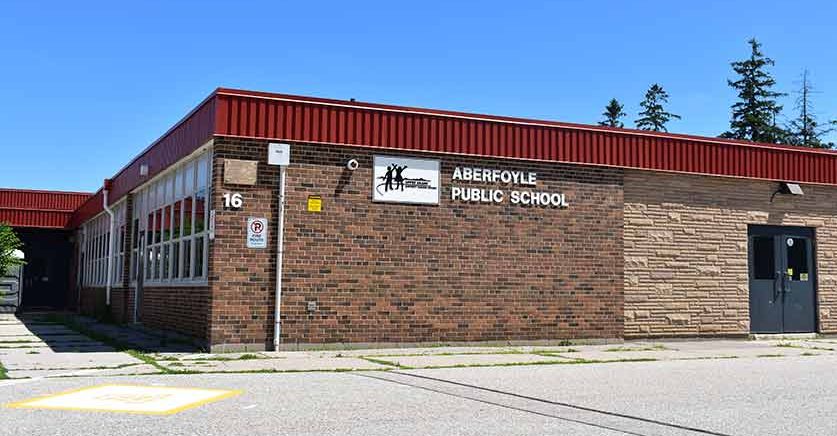 ABERFOYLE – Puslinch council has agreed to hire a crossing guard and prohibit parking at certain times on Old Brock Road and Cockburn Street in an attempt to improve safety for Aberfoyle Public School students.

As part of the parking bylaw amendment approved at the April 21 meeting, the township will install “no stopping” and “no parking” signs on the roads.

“We have identified further issues with parking on Old Brock Road,” he said.

“Parking on Old Brock Road is congested, with vehicles parking on both sides of the road. This is on the west side of the street and creates a bit of a ‘tunnel’ where vehicles cannot easily pass through.”

This has made it very difficult for emergency vehicles or school buses to pass through, he added.

The staff report noted “multiple concerns” about the situation “have been brought to staff’s attention by residents, school staff and the [OPP].”

“We need to make sure that the parking situation on Old Brock road is at its optimal condition to where it will support the safety of all kids and parents.”

Puslinch staff proposed that parking on the south side of Old Brock Road, from 16 Old Brock Road to the western limit of the road, no longer be permitted during the school year on weekdays between 8 and 9am and 2:30 and 3:30pm, to support drop-off and pick-up times.

He said he believes roads surrounding Aberfoyle PS should not permit parking of any kind during drop-off and pick-up hours, with the exception of school buses.

This would include parking being prohibited on Cockburn Street as well as Old Brock Road.

“I feel that there shouldn’t be any parking by residents within their personal vehicles within those hours,” Seeley said.

Seeley believes the township should create a drop-off zone just off of Cockburn Street.

The exception for school buses will give the principal the “tools to adjust where the school buses load and unload,” said the mayor.

“It will be a bit of a work in progress to see what works.

“I would suggest that we mark it all (even where the road widens) ‘no parking’ and then on the north side, if we could install ‘drop-off zone’ signs.”

Lunevski agreed this would be the best way to enforce the bylaw.

“I would suspect that it may need some modifications as it’s put into practice,” said Goyda.

“But to me it seems like it may be a solution to solve all these issues.”

“With this solution, you’re going to get a lot of congestion along the sidewalk now where lots of kids are coming out and parents are coming in,” she said.

“Essentially, we’re creating a one-way. We’re creating traffic coming up Cockburn and left on Old Brock Road, and I’m wondering if we should be going down that road.”

Mayor Seeley disagreed, saying that unless parents are late to pick up their children, this wouldn’t be an issue.

Bailey replied, “As long as Cockburn doesn’t get all backed-up.

“If we’re talking about 40 cars at 8:29 in the morning, trying to come up Cockburn, you don’t want traffic congestion out onto Old Brock Road. But again, we won’t know until we try it.”

“I believe this would allow for a safer solution for drop-offs, especially with narrow roads like Cockburn and Old Brock Road,” he said.

Eventually, council unanimously agreed on the proposal and passed the bylaw with the revisions discussed.

Meghan Matteo, an Aberfoyle Public School council member, presented a proposal on April 21 asking council to hire a crossing guard for the school by September.

The crossing guard would work at the intersection of Brock Road and Old Brock Road.

Matteo said many parents feel uneasy about dropping off and picking up their children due to concerns about dangerous driving in the school zone.

“Parents have observed vehicles speeding, running red lights, and turning onto Brock Road from Old Brock Road, in front of families trying to cross, with some near misses,” Matteo said.

“We are requesting a crossing guard to be put in place before a serious accident occurs and lives are lost.”

Council fully supported this proposal, with Goyda calling it a “no brainer.”

“I definitely would support staff putting something in place,” she said.

Bailey said a crossing guard would be the “icing on the cake” in terms of making the school zone safe for students.

Mayor James Seeley said as long as the township can find someone to apply, the school will get a crossing guard by September.