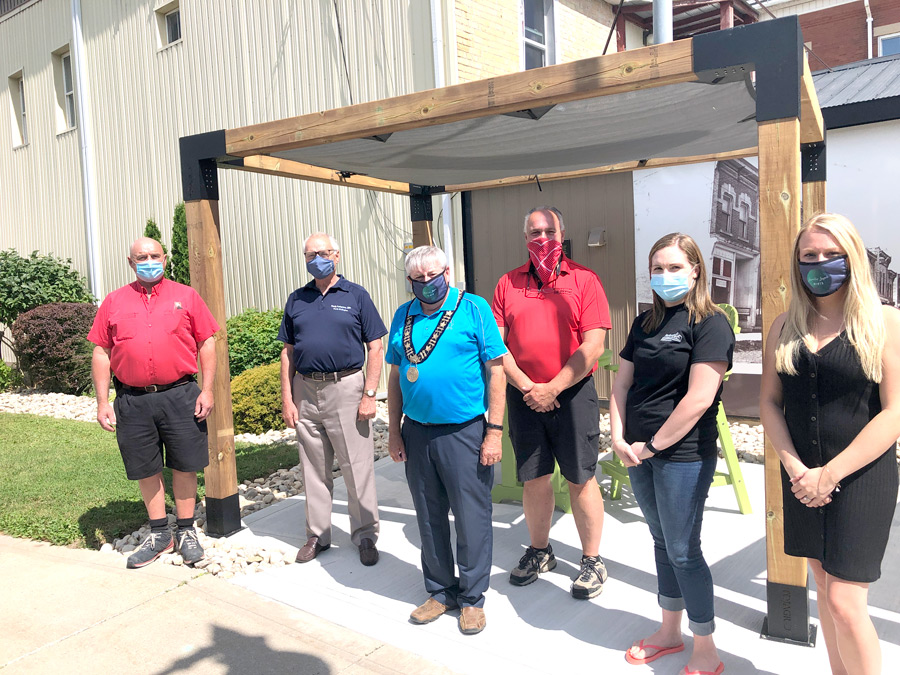 HARRISTON – A Rural Economic Development (RED) grant for downtown beautification projects in the Town of Minto was officially announced here on July 27.

The Town of Minto will receive up to $41,954 to support capital projects including streetscaping and landscaping under the municipality’s Our Towns Rising project.

The provincial support builds on a funding commitment already announced by the County of Wellington.

Officials from the Town of Minto, including Mayor George Bridge, joined MPP Randy Pettapiece at Tannery Park in Harriston to announce the funding.

Some parts of the project, including murals on downtown buildings and installation of outdoor furniture in the downtown areas, are already underway.

Bridge acknowledged the contribution of the Harriston Rising, All Aboard Palmerston and Clifford Connects committees in making the projects happen.

“This has been a grassroots project. They just took it upon themselves and went with it and because they put together what we’re doing today we’ve seen amazing growth,” said Bridge.

He also acknowledged the funding role played by the province.

“This is really important going forward right now with our economic development, to get us up and running again,” the mayor stated.

Pettapiece also acknowledged the community organizations for their efforts.

“As we look forward to opening our economy projects like this help out a lot,” the MPP stated.

Pettapiece said Tannery Park, where the local Kinsmen Club recently completed the installation of a pergola, “is such a welcoming area for people that live in the town, but certainly for people that come to Harriston to see this and may even think of staying in Harriston, or Minto to live.

“Like the Town of Minto our government is committed to building strong rural communities. We need to make sure that small and rural communities remain great places to live and work. The Rural Economic Development Program  program is helping to do just that,” the MPP stated.

Marketing and community development co-ordinator Taylor Kuenen said the community is appreciative of the RED funding.

“We had multiple businesses and community groups and community members involved in all this, so it’s a very collaborative effort and we’re just really grateful to see our town just flourishing,” she stated.

“We definitely enjoy making Minto and downtown Harriston a brighter place to be,” said Mock.

Terry Cormack, of All Aboard Palmerston acknowledged the work of Minto economic development manager Belinda Wick-Graham and other town staff for their efforts in securing the grant and also thanked the province for the funding.

“There’s so many things it allows us to do as we try to generate areas of interest and beauty within our community that will bring people to visit us,” said Cormak.

Alexis Rock of Clifford Connects noted the village’s downtown projects were initiated more recently than those in Harrston and Palmerston.

“But we are well on our way now, so we do look forward to utilizing the grant money that was set aside for our funds in Clifford to see our downtown flourish.”