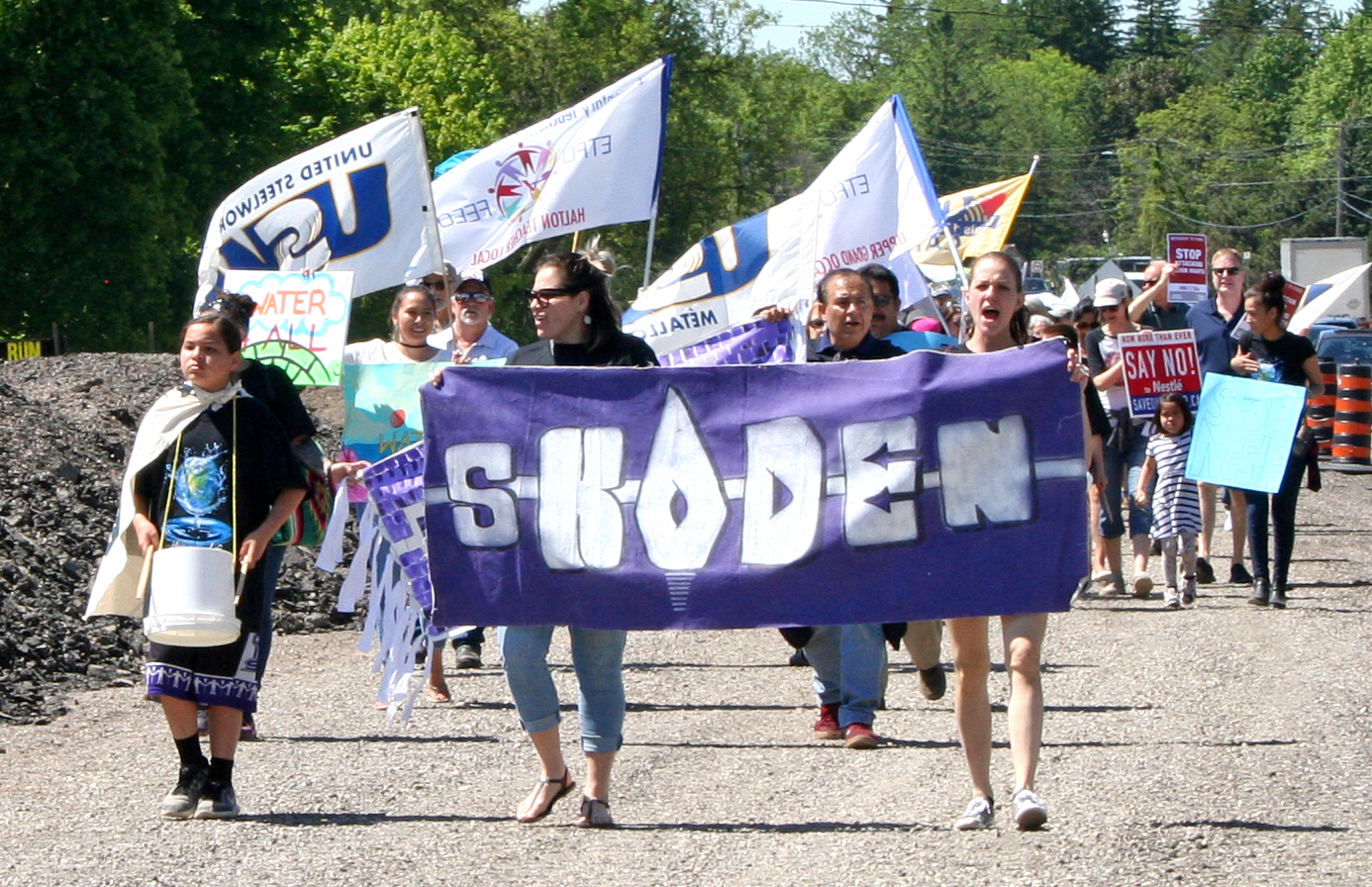 On the march - Roughly 200 strong, protesters marched down Brock Road in Aberfoyle to protest at the Nestlé Waters facility. Photos by Mike Robinson

The demand came on June 7 as about 200 protesters marched from the Puslinch Community Centre along Brock Road to the front of the Nestlé Waters Aberfoyle operations.

Construction along Brock Road was halted to accommodate the protest.

Protesters staged the event in the roadway leading into the Nestlé plant, preventing trucks from leaving or entering the property.

The event was held in conjunction with the provincial Days of Action marking the first full year of the current Conservative government.

Organizers say that after one year in office Doug Ford’s government continues to allow multi-national corporations to take natural resources for profit. 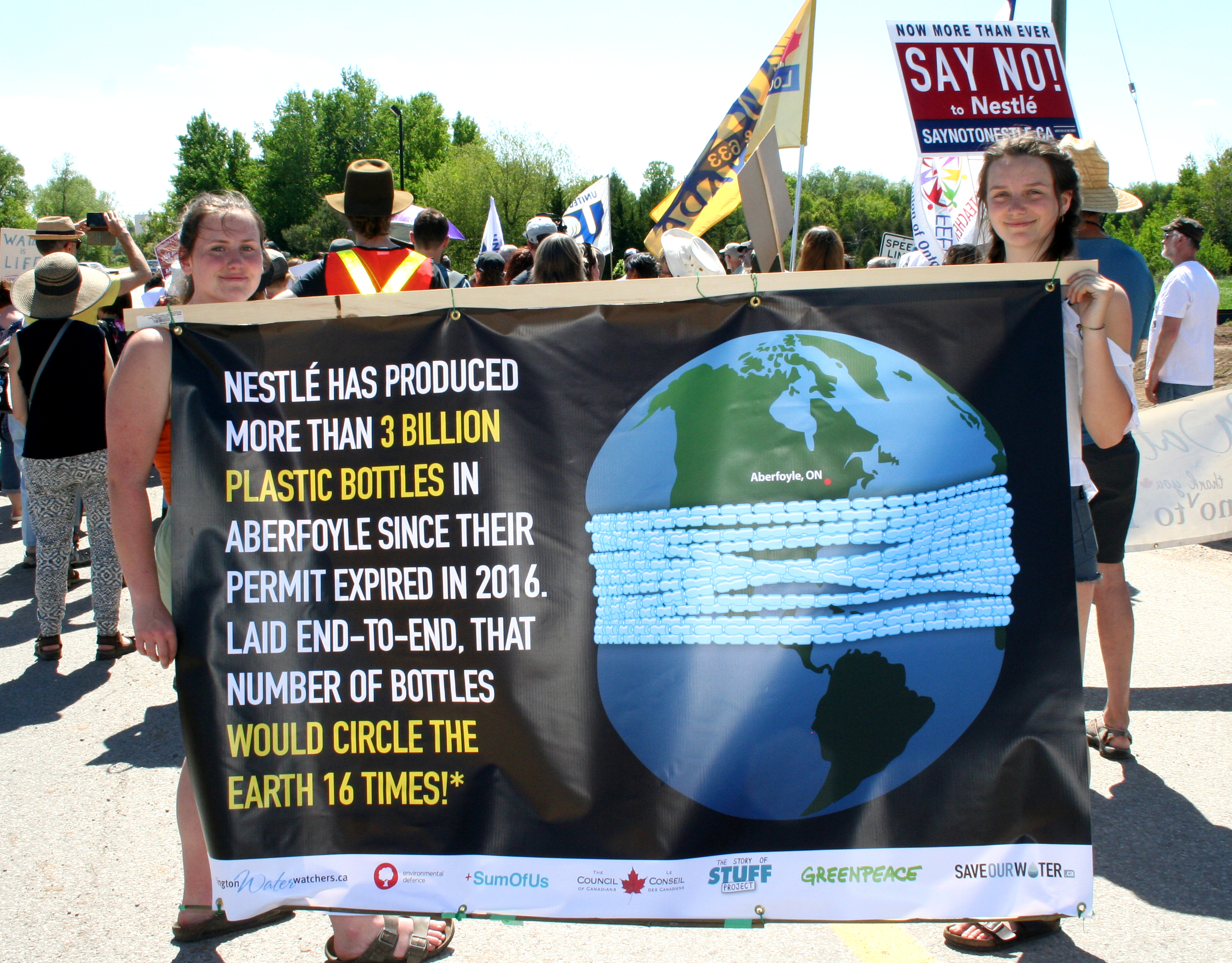 Protesters said Nestle is “taking 3.6 million litres per day from beneath our feet. The majority of Six Nations, 91% of our people do not have access to clean drinking water.

“We hold ancestral titles to these lands, territory and water. We wish to reiterate our clear objection to your activity. You may have the permission of the settler colonial government to carry out this activity, but these are Haudenosaunee territories that you are operating on.

“As holders of ancestral title over this territory … we demand you cease your activities immediately.” 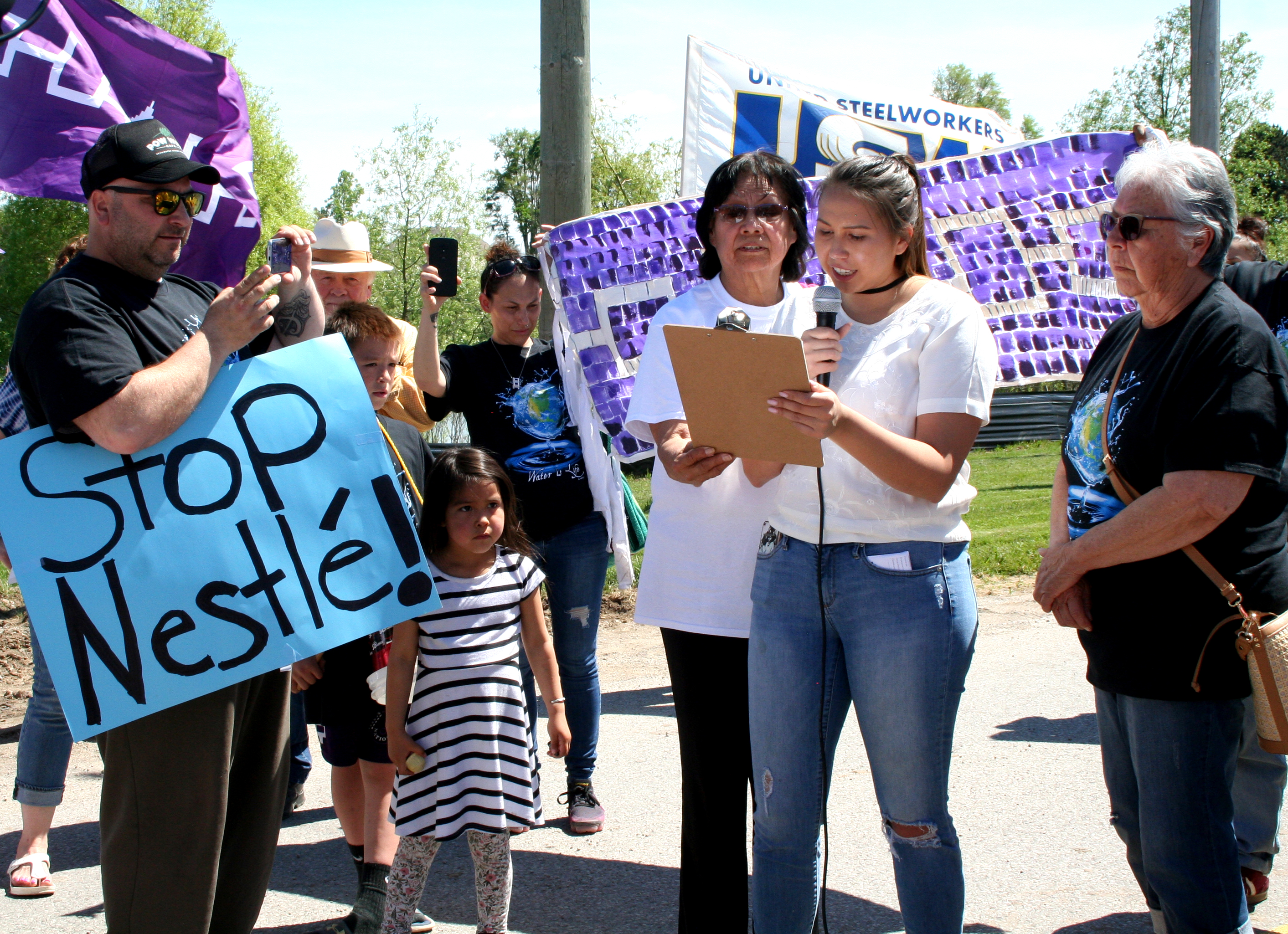 Local labour groups and environmental organizations were on hand in support of the Nestlé protest.

Janice Folk-Dawson read a prepared statement by OFL and stated “The Ontario Federation of Labour stands in support of Six Nations, their continuing legal struggle, and their current legal action against Nestlé’s continued pumping and bottling of waters in Six Nations territory

“Canada is home to 60 per cent of the world’s lakes and one-fifth of the world’s fresh water. The importance of protecting our waters cannot be overestimated.”

She added, “On June 4, Nestlé pumped its two billionth litre of water in Aberfoyle despite the fact that its permit to take water had expired.”

Note: While the current provincial moratorium has stopped new permits to take water for bottling, Nestlé’s permit in Aberfoyle was up for renewal – allowing the company to continue to draw water until a provincial decision is rendered.

Folk-Dawson added, “We call on the government to deny the 10-year permit that Nestlé has applied for and protect the water rights of Six Nations and all Ontarians.”

Robert Case of Wellington Water Watchers added his support to the protest.

“I think it is shameful that our government is selling out our water rights and Six Nations’ water rights through this permit to take water,” he said.

“We need send a strong message to our government and say no to Nestlé.”

One of the participants in the rally was Donna McCaw, a member of Save Our Water.

Overall she was pleased with how organizers and participants conducted themselves at the event.

McCaw was happy to see someone from Nestlé came out to accept the Six Nations’ cease and desist order, which means “it cannot be denied at any point.”

“I was happy with the turnout and happy with the numbers attending from Water Waters, the Catholic teachers, the public board teachers, Save Our Water, the unions – OFL. There were so many groups represented,” said McCaw.

Overall, Folk-Dawson was pleased with the event.

“It was absolutely incredible and I was really proud the Six Nations could come in and have their voice.

“We were able to give them the opportunity and the venue.”

The Guelph District Labour Council co-sponsored the rally and march to the bottling plant in Aberfoyle in cooperation with groups such as Council of Canadians, Extinction Rebellion, OPIRG Six Nations and Wellington Water Watchers.