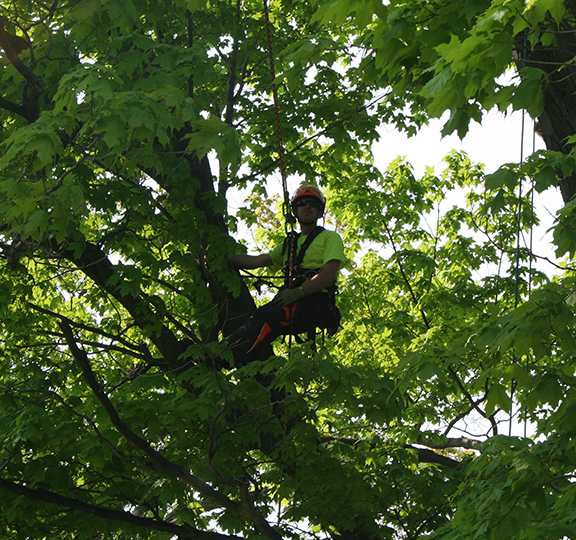 The goal is to extend the life of legacy trees in conjunction with planting young trees to make a big impact on the local urban forest.

To kick off Elora’s 2019 Tree Day, the Elora Environment Centre formally launched what organizers described as “Canada’s first ever carbon offset program with a dual mandate: to plant young trees and care for large legacy trees.”

Community members and dignitaries attended the formal launch on June 1 on the grounds of the Elora Community Centre.

“Our objective is to offer people in this community an opportunity to offset their flights, which are fairly carbon heavy,” said Tree Trust program manager Toni Ellis, of the Elora Environment Centre.

“Given the growing concern about climate change, offsetting carbon from air travel is something people are asking what they can do locally.”

Ellis described the program as a way people can purchase an offset and see the money remain in the community and invested in the local urban forest.

The money goes to the Elora Environment Centre a registered charity, so donations are tax deductible.

Ellis explained the money will be used in part to hire members of the Centre Wellington Arborist Association to extend the life of older trees in the community.

“There are a lot of issues with older trees – such as bad form, crossing branches, and dead limbs, all of which can affect the trees,” she said.

“By doing some maintenance, we improve the chances the tree will live a longer and happy life – and not be a safety hazard to people.”

Ellis explained “each large tree is a sink for about seven tonnes of carbon in its trunk and leaves. By keeping that tree alive, we are not emitting that carbon into the globe.”

But the program does not stop there.

Ellis said Tree Trust includes planting two new trees near legacy trees, which would be expected to take over when the older trees eventually fade away.

“What we find is that if a small tree is planted near a big tree, the big tree helps shelter the younger one,” she said.

Ellis noted with typical carbon offset programs, such as those offered by airlines, the money leaves the community.

“Our objective is to keep the money local, where people can see their money- their carbon offset, in action,” shes said.

At the launch, with local arborists in the background trimming a tree at the community centre, Ellis said, “While old trees are not always majestic, they are always valuable.”

She explained that in addition to being carbon “sinks,” the trees act as wildlife habitat, stormwater mitigation and create a sense of place and a link to the past. 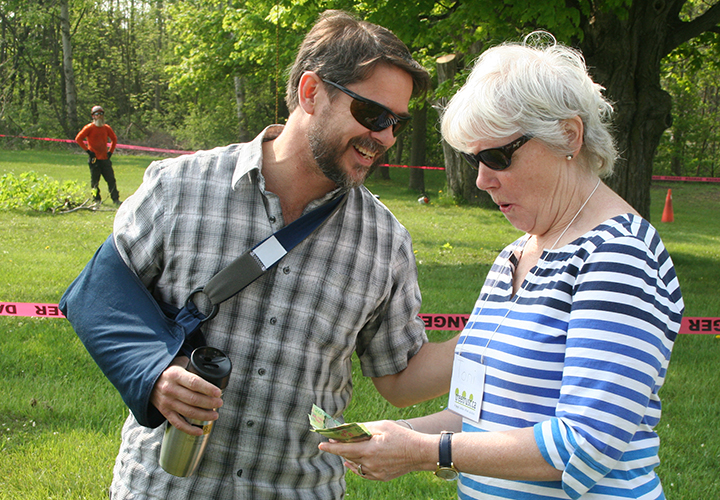 In trees we trust – Residents celebrated the launch of treetrust.ca on June 1 in Elora. Jason Thompson, left, explained to Toni Ellis why he became the first donor to the Elora-based program.
Photo by Mike Robinson

Ellis said people can visit TreeTrust.ca for an explanation of the program and a simple carbon calculator that suggests a monetary donation based on the amount of travel.

“These donation suggestions are fairly modest,” Ellis said, explaining a return trip to Montreal would result in a suggested donation of $14.

Donors can also make a contribution for past flights and for donations of $200 or more, Tree Trust will send a photo of the tree the donor is helping to save.

Wellington-Halton Hills MP Michael Chong praised the work of Ellis over the past 13 years. 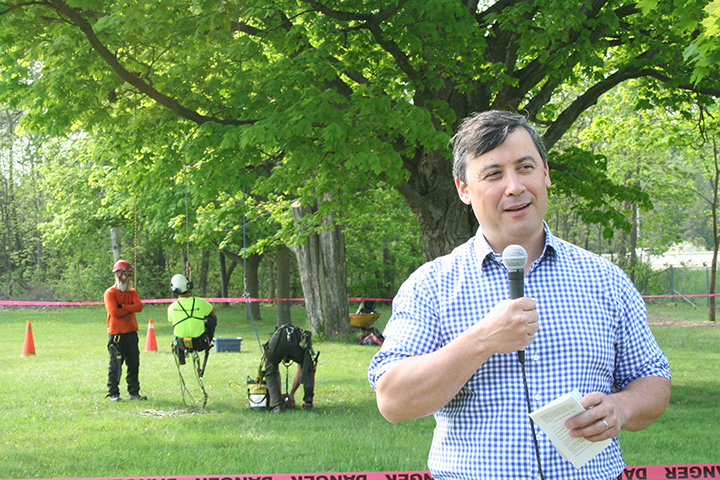 Wellington-Halton Hills MP Michael Chong praised the work of Ellis over the past 13 years. Photo by Mike Robinson

“I think it is quite innovative to create this carbon offset organization in the community,” Chong said.

“It is through initiatives such as this (that) we are slowly moving in the right direction for forest cover.”

He said people often forget that while southern Ontario is now rolling farmland, it was once eastern deciduous forest. Most of that was clear cut by the late 19th century and the local watershed was reduced to about two per cent forest cover.

“Old timers will tell you that in the 1950s, in the Grand River watershed, there would be massive flooding in communities such as Galt and by August, one could walk across the riverbed without getting the bottom of your shoes wet,” said Chong.

“These initiatives are making a real difference and I encourage people to support this – I certainly will.”

The carbon calculator at TreeTrust.ca is available to anyone looking to offset their air travel.

The launch was part of Elora’s 2019 Tree Day, which included demonstrations by local arborists, walking tours and viewing of a tree-themed art exhibit at the Elora Centre for the Arts.