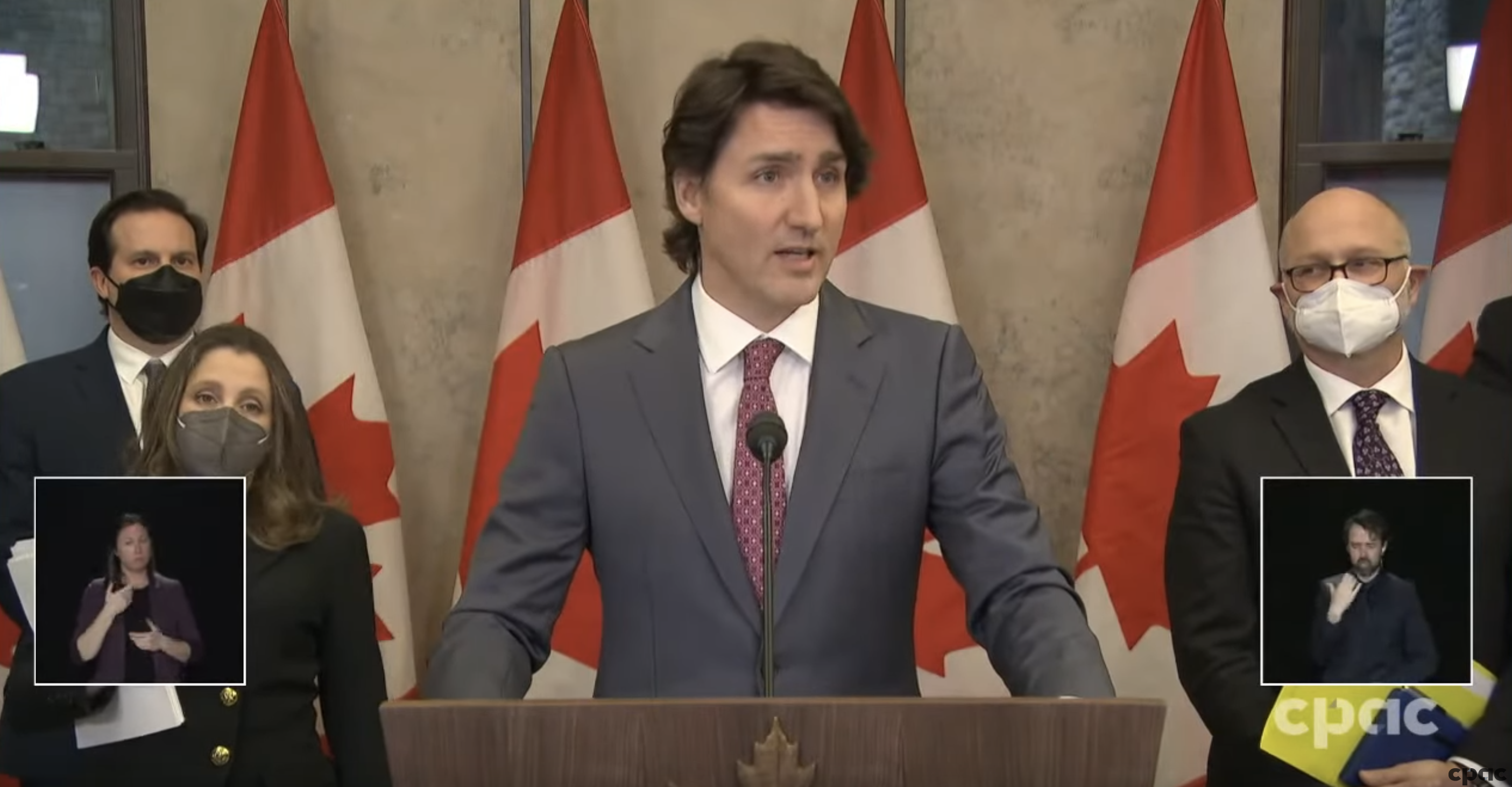 OTTAWA – Prime Minister Justin Trudeau declared a national emergency in response to the recent blockades of Canada-U.S. border crossings and the occupation of Wellington Street in downtown Ottawa.

Flanked on Monday by Deputy Prime Minister Chrystia Freeland, and ministers David Lametti, Marco Mendicino and Bill Blair, Trudeau addressed the nation from Parliament Hill, partially detailing what invoking the Emergencies Act will mean for Canadians and those involved in blockades and a convoy protest occupying the capital’s downtown, which was into its 19th day on Tuesday.

Trudeau said the act is not being used to “call in the military” and does not suspend the fundamental rights of Canadians or override the Canadian Charter of Rights and Freedoms.

Continuing, the PM said, “Invoking the Emergencies Act is never the first thing a government should do, nor even the second – the act is to be used sparingly and as a last resort.”

The implementation of measures, although valid throughout the entire country, will be “time-limited, geographically-targeted, as well as reasonable and proportionate to the threats they are meant to address,” Trudeau stated, later saying small communities without significant illegal protests are “unlikely to see any impact.”

While Canadians have a right to express frustration and anger with their government, the PM said blockades and infringement on the freedom of others “has to stop.”

He praised Ontario Premier Doug Ford’s “responsible” and “necessary” decisions to invoke a state of emergency in the province on Feb. 11.

Conservative finance critic Pierre Poilievre said on Monday, “the only emergency is the one that Justin Trudeau has deliberately created to divide the country and gain politically” and said an easier way to end protests would be to end mandates and restrictions.

Interim Conservative leader Candice Bergen said “at first blush” the party is concerned the prime minister’s actions will do the opposite of making Canadians feel heard and respected. She noted Alberta, Saskatchewan, Manitoba and Quebec are all opposed to the declaration.

Police will be given “more tools” to restore order in places, such as the Ambassador Bridge linking Windsor and Detroit, where public assembly creates illegal and dangerous activity.

The feds will “designate, secure and protect” critical zones such as border crossings and airports.

Trudeau said there are “serious challenges to law enforcement’s ability to effectively enforce the law” and that it’s “clear that there are more tools necessary.”

Additional “tools” for police also include strengthening their ability to impose fines or imprisonment for breaking orders or regulations made under the Emergencies Act.

Protesters had gone far beyond showing their discontent and were now hurting the very people they purport to protect, Trudeau said.

“We cannot and will not allow illegal and dangerous activities to continue.”

The heaviest measures being implemented, however, come in the form of financial implications facing blockade and convoy participants. 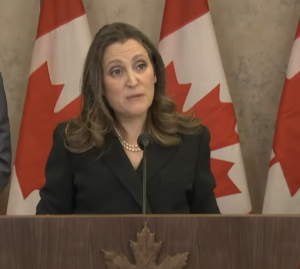 Deputy Prime Minister Chrystia Freeland referred to the blockades as a “siege” harming Canada’s international reputation and global confidence in the country as a reliable trading partner.

“The world is watching us,” Freeland remarked before disclosing a series of measures aimed directly at the flow of cash sustaining protest and blockade participants.

Whereas banks and financial institutions are already obligated to report to the Financial Transactions and Reports Analysis Centre of Canada (FINTRAC), now all crowdfunding platforms and their payment service providers have to register with the centre and are bound to report large, suspicious transactions – including that of cryptocurrencies.

“This will help mitigate the risk that these platforms receive illicit funds, increase quality and quantity of intelligence received by FINTRAC and make more information available to support investigations by law enforcement into these illegal blockades,” the deputy prime minister explained.

She added the feds plan to table legislation making the broadened scope of the anti-money laundering and terrorist financing rules permanent.

Canadian financial institutions are now able to stop providing banking and financial services to persons and corporations they suspect are supporting blockades and the Ottawa occupation.

“It’s the ability to block the use of private property such as trucks,” said Canada’s Justice Minister and Attorney General David Lametti.

Financial institutions have also been directed to review services provided to anyone involved in the blockades or occupation and report those relationships to the RCMP or Canadian Security and Intelligence Services.

The feds now also have “new, board authority” to share information with banks and financial services as well, Freeland said.

Banks can immediately freeze or suspend connected accounts without a court order.

“We are today serving notice: if your truck is being used in these illegal blockades, your corporate accounts will be frozen,” Freeland said, adding vehicle insurance policies would also be suspended.

“This is about following the money,” she remarked.

“What we are facing today is a threat to our democratic institutions, to our economy, and to peace, order and good government in Canada,” she continued, adding, “it cannot stand and it will not stand.”

Never before used, the Emergencies Act was enacted in 1988, replacing the War Measures Act that was used in both World Wars and during the 1970 October Crisis in Quebec by Trudeau’s father, Pierre Trudeau.

To declare a public order emergency, certain conditions must be met, including that the current crisis seriously endangers life, threatens security and sovereignty and exceeds the ability of provinces or other laws to address it. 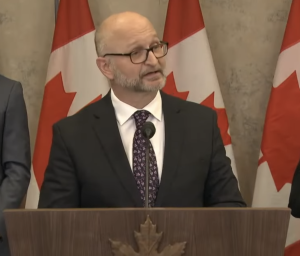 “Our government believes that those conditions have been met,” Lametti said.

But the Canadian Civil Liberties Association (CCLA) countered the government’s narrative in a Feb. 15 press release, stating: “The federal government has not met the threshold necessary to invoke the Emergencies Act.”

The act, the CCLA stated, exists to address “extreme threats to Canada, not to protect the economy.”

“Governments regularly deal with difficult situations, and do so using powers granted to them by democratically elected representatives. Emergency legislation should not be normalized. It threatens our democracy and our civil liberties.”

The Justice Centre for Constitutional Freedoms, an Alberta-based legal organization and charity advocating on behalf of convoy participants and litigating against vaccine mandates, stated in a Feb. 14 press release that it would “immediately file a court application” seeking to overturn an emergency declaration made because of “peacefully protesting truckers in Ottawa.”

“Prime Minister Justin Trudeau is considering using the Emergencies Act to deal with bouncy castles and ball hockey,” stated Jay Cameron, a lawyer and litigation director at the Justice Centre.

Regardless, federal measures take immediate effect but must be tabled before Parliament within seven days, where, in the House of Commons, a vote on the declaration will be held. The Senate also gets a vote. If the declaration is not approved, it’s rescinded.

In the coming days, a Parliamentary oversight committee must also be created and a public inquiry reported to the House of Commons on the declaration within a year following its termination.

The emergency declaration lasts for a 30-day period, unless extended, but Lametti said the federal government hopes to revoke it earlier.

“These measures are temporary, we intend to impose them for only as long as needed to restore order across the country,” he said.

Trudeau claimed Canadians were not divided, but united behind the desire for leadership to act and restore confidence lost in Canadian institutions and to protect job security, personal safety and an economy already battered by the pandemic.

The measure of success, the prime minister said, will come down to: “Can we get our supply chains back, can we end the disruption to livelihoods of people who rely on trade to the United States from these border crossings?”

Signs were already showing on Tuesday that the federal measures were working, as national news media reported that a blockade in Coutts, Alberta packed up and rolled away.

And in British Columbia, the RCMP made arrests and cleared a blockade where the Pacific Highway crosses into Washington State.

An earlier blockade at the Ambassador Bridge was removed on Sunday and the bridge reopened in the early hours of Monday morning.

Trudeau also stated the Canadian Border Services Agency has been denying entry to non-Canadians seeking to join in the blockades.