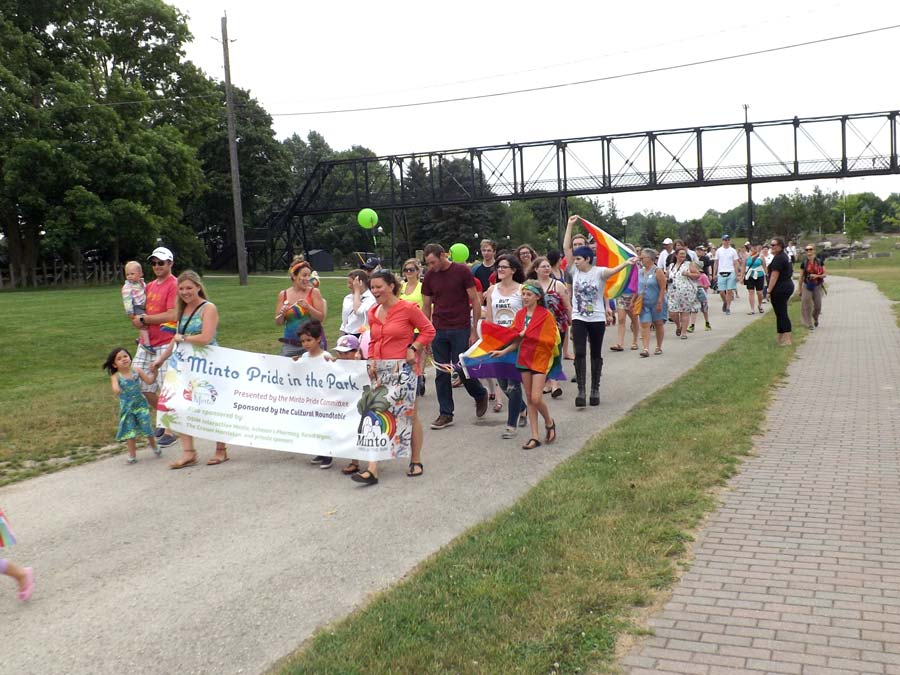 Pride in Minto - The inaugural Minto Pride in the Park event was held in Palmerston on July 13. Community News file photos

MINTO – Organizers of Minto’s first Pride event last summer made a presentation to council here on the value of supporting diversity.

“We’re not here for any particular ask other than to want to share some information,” said Jessica Rowden, of the Minto Pride committee at the Jan. 21 meeting. 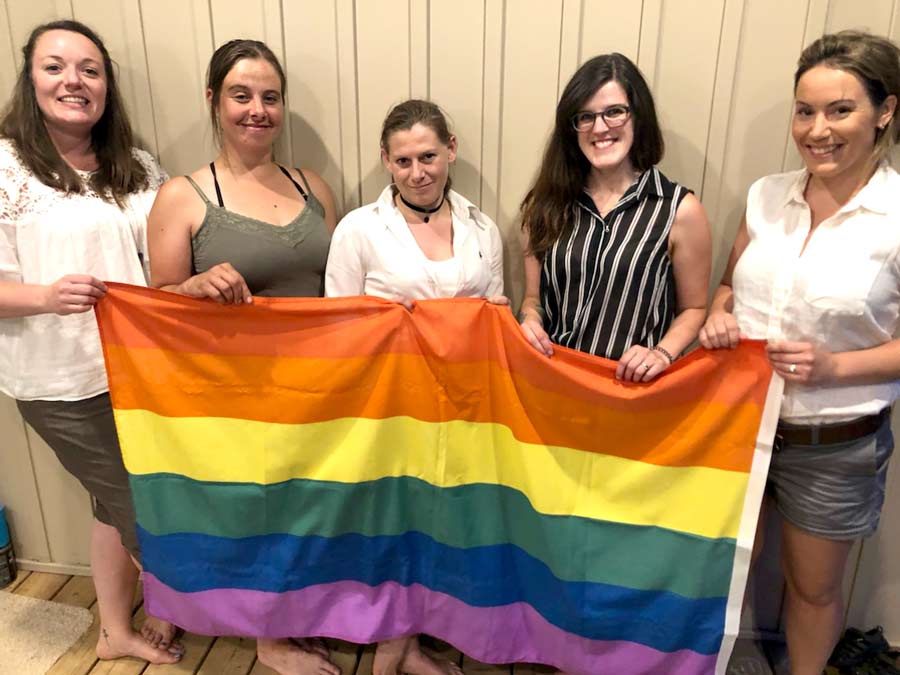 Members of the organizing committee include, from left: Jessica Rowden, Caitlin Hall, Raïssa Rogers, Rosie Krul and Samantha Greer. Rowden made a presentation on the value of supporting diversity to Minto council on behalf of the group on Jan. 21.

Rowden opened her presentation with a quote from author and social justice activist L.R. Knost, noting the sentiment is “something we strongly believe in.”

Rowden, who works as an equality and inclusion lead with the Upper Grand District School Board, shared her insights from her “experiences here as a young person in the community and returning within a family.”

“I grew up in this community very proudly but throughout my experience in high school I was quick to want to leave, as many in their haste and youth do,” she said.

“But it was in my years of reflection afterward that I realized the parts of living in a community like this, and particularly ours, that bothered me and how it was really important to come back and try my best to effect change.

“And I heard other people on my team say very similar things about how they couldn’t wait to get away as a youth and how they were back because they wanted to try and change the things that drove them away in the first place.”

She added, “I’m very proud to be a Minto resident and when I saw the slogans coming out about being a place for families to come, that was even more drive for me to participate in a way that I thought would drive all families in a safe and inclusive way to this community.”

“We strongly believe that is part of ensuring this community is safe for all people,” she added.

“I want to stand before you as somebody who is straight and married to a man and living in this community, with a lot of values and beliefs.

“But I want to explain to you why I’m here, why I’m doing this work so that perhaps that you can see that this is a conversation for all folks to show leadership, not just certain individuals.”

Rowden continued, “People often think of equity as a conversation that doesn’t involve them unless they are somebody who lives in a marginalized identity and I just wanted to point out that that’s not the case and that equity and inclusion and the work that we’re doing is actually everybody’s work and we all have identities and identity directly connects to how we walk through this world.”

Rowden explained members of the LGBTQ community “have parts of their identity that make it harder for them to walk through this world.”

She pointed out that “LGBTQ people have existed through all of noted history … and all different cultures and places of the world and I offer that to you as evidence that this isn’t a trend. This isn’t a new thing. This isn’t going away.”

Rowden said “misinformation and ignorance” that results in oppression against LGBTQ community members often comes from those who don’t recognize they are part of the problem.

“Another thing we sometimes hear in this world is ‘I’m okay with certain people. I just don’t want to hear about it,’ or ‘It’s too private’ and I appreciate that in a way, but it also minimizes identity in general, as well as the fact there’s a lot of people within that acronym. I’ve heard somebody say that would be the same as saying your Dutch identity is just about clogs … sex and sexuality is one piece of someone’s identity. It doesn’t make up who they are.”

She said Pride events serve the same purpose as demonstrations for other types of equal rights movements.

“Some of the pushbacks we had experienced and some of the great conversations and great questions we experienced were around why the need to have a celebration and a parade,” she said.

“I wanted to draw  parallels to the fact that many groups of humans have used those measures to gain rights and freedoms in this world and, as a woman, I’m very thankful for the marches and parades that were done on my behalf by suffragettes all around the world so that I could have equal rights and opportunities.”

Rowden said its important for people in positions of leadership and privilege in the local community to stand up for those who can’t stand up for themselves.

“It’s very important to us that we use these positions of privilege to do the effecting of change because people who are experiencing the oppression are unlikely to be the change makers on their own behalf, because unfortunately there’s a lot of things against them.”

Rowden told council, “We are looking just for your openness to learn with us and understand that the work that we are doing is in support of folks that we believe are experiencing a lot of oppression, that we have many of in our community and that we feel it would be a vast service to our community if we could draw more diverse individuals here  and retain the individuals that we have that might be leaving for the same reasons we did as young people.”

Minto Pride is planning to host a Winter Rainbow Social on Feb. 15 from 1-3pm in the basement of the Harriston library.

The Valentines Day/Family Day event will celebrate “all love and all families,” organizers note.

Rowden also noted the 2019 summer Pride celebration will be held in June, which is officially Pride Month.

Mayor George Bridge congratulated the group on the inaugural event in 2019.

“It was amazing. You did an excellent job for your first event,” the mayor stated.

Rowden said about 200 people attended the family-friendly Pride in the Park party.

“We had a ton of children and youth and entire families. I would say from my own understanding about half the people there were not identifying as LGBTQ, they were there just because they believe firmly like we do that the allying work in our communities, that has to happen for all people.”

Deputy mayor Dave Turton said, “Since the festival … in Palmerston last year it’s pretty amazing the number of people that are talking about it … it’s really quite unique and I support it

“Thank you for coming back to our community.”

Councillor Jean Anderson asked Rowden about her reasons for leaving the community as a young person and whether the problems were with peers, teachers or the community at large.

“I had two friends growing up in this community … and they experienced physical assault multiple times a week because of their sexuality,” Rowden explained.

“Those don’t represent our entire community, and as a teen I knew this as well, but I also knew that in that moment, in that time, as a youth, I did not feel this was a community that truly had the investment in understanding diversity, even cultural diversity or religious diversity.”

“That’s very unfortunate. It saddens me to hear that and I’m hoping we get past that,” said Anderson. “That’s profoundly disturbing, but thank you for coming.”

Rowden said, “We know that everybody will be looking back in 50 years and seeing that this is common place and we just want to be on the right side of that history.”

Minto Pride is currently seeking youth participation in the planning committee. Minto residents between the ages of 10 and 18 are encouraged to apply.

Participants should have an interest in sharing perspective on LGBTQ+ inclusion and celebration in Minto; and be able to attend select meetings in person or via technology.  ​

Youth are invited to email  a few sentences explaining their commitment and interest to the team at: mintopridecommittee@gmail.com.