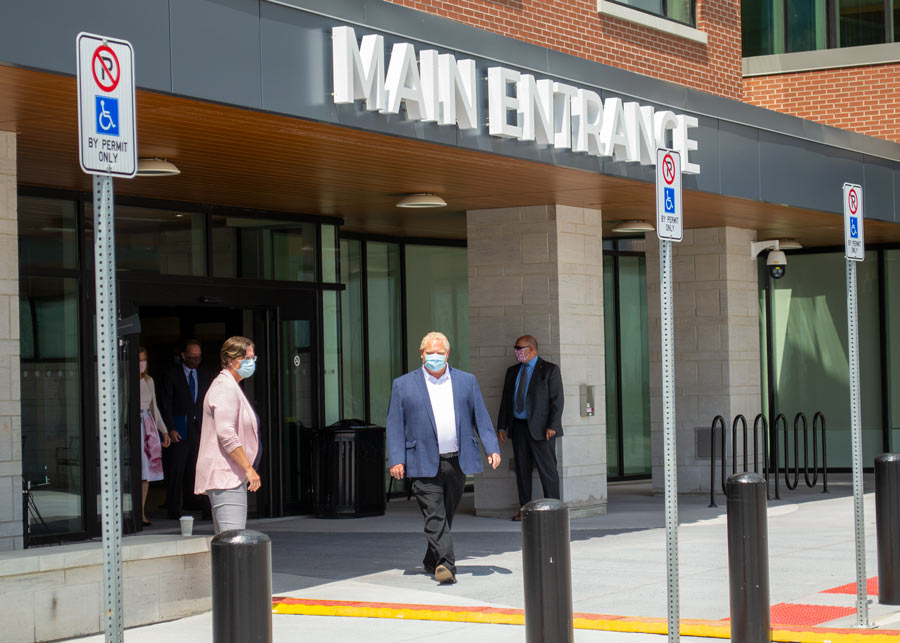 “In all the memories we cherish there are moments that stand out above all others, so too with communities,” said Wellington-Halton Hills MPP Ted Arnott.

“For our community this is one of those moments – a brand new, state-of-the-art Groves Memorial Community Hospital, opening in 2020, representing hope in these difficult times, reminding us that a shadow, no matter how dark, will always in time give way again to the light.”

Arnott was one of many dignitaries, including Premier Doug Ford, present at the Aug. 7 ribbon cutting for the new hospital.

The hospital officially opened to the public on Aug. 9 at 6am.

“While our numbers today are diminished by necessity, our spirits are unfolding with excitement, our hearts are full of appreciation and our proceedings are dignified by the presence of both the premier and deputy premier of Ontario,” Arnott said, citing COVID-19 restrictions.

All those who attended the press conference donned masks and stayed apart when possible.

He acknowledged the collective effort of all volunteers, donors, staff, physicians, professional consultants and organizations that helped the hospital become a reality after receiving approval nine years ago.

“I had a vision that today would be very different,” Street said. “That I would be celebrating this milestone with those same hundreds of people that had a part in building this facility, but the current events have not allowed for that.

“But that should not stop us and those same individuals from celebrating with us and having that sense of accomplishment and pride for the thousands of hours that they have invested. It’s truly their celebration and it’s our collective success.”

The new Groves hospital was made possible by about $144 million in funding from the province as well as $27 million raised through donations.

This year Groves is also receiving almost $11 million in additional operational funding, which is more than a 50 per cent increase, said deputy premier and health minister Christine Elliot.

She explained that is part of $594 million in operational funding the government is investing in small and medium-sized hospitals to address funding inequities.

Street acknowledged the process “has been a long road,” but noted “good things are worth waiting for and great things are the result of great teams lead by individuals who are passionate about what they do and we have a great passionate team here.”

Ford complimented the community on the “beautiful” facility.

“It takes collaboration from municipalities, the private sector, the public itself, the community and the province and this is a great example of what happens when everyone comes together,” said the premier.

“I always say, when I come to communities, especially a small community, number one is the hospital, a great hospital.

“Number two is a community centre and it brings people together and everyone has a common cause to build items like that.”

Ford also appreciates that the new Groves is completely digital.

“I think every hospital that we build moving forward, let’s not reinvent the wheel,” he said. “I’m a big believer in continuous improvement; we can always improve but digital is the way to go.”

Elliot also congratulated the community on making the hospital a reality.

“You have shown remarkable perseverance to complete this important project that will help residents in Wellington County access the care they need in a new state-of -the-art facility for decades to come,” she said. 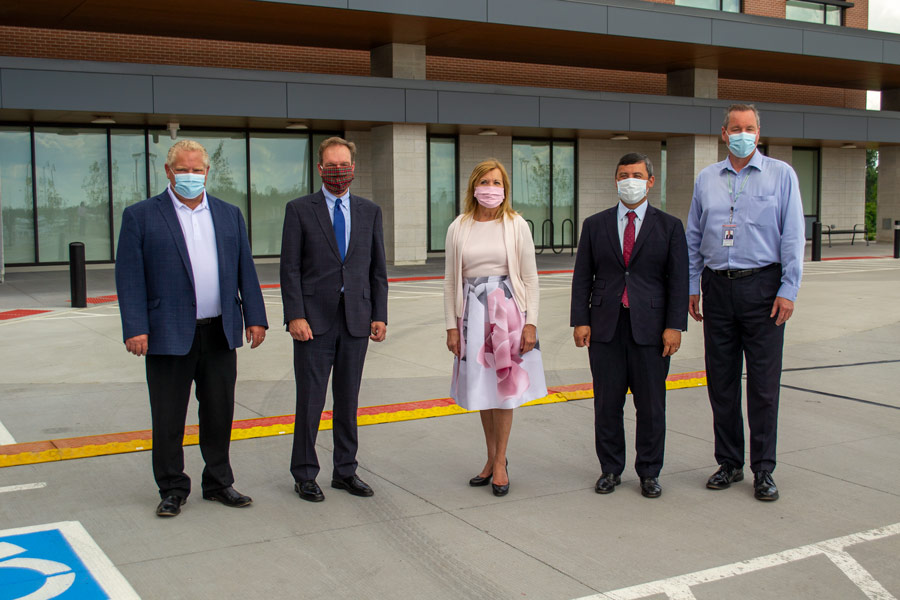 Projects like the new 158,000-square-foot Groves, Elliot said, will help build capacity and put an end to hallway health care in local hospitals.

The new hospital will include:

“Secondly I’d like to say that Carrie and I are so thankful for this new hospital,” Chong said.

“Our three kids have used this hospital. Our oldest was born at Groves … back in 2004, we’ve had two broken arms set here … our youngest actually had an appendectomy a year ago in Groves, an emergency appendectomy.”

The new hospital is also a source of pride for Wellington County Warden and Centre Wellington Mayor Kelly Linton.

“We couldn’t be happier for this day to come today,” he said. “Little did we know that we would be opening up this new hospital during the middle of a global pandemic.

“Never before has the importance of a local hospital been as obvious as it is right now.”

Gord Feniak, director of the Groves board and chair of the building committee, offered messages from those who were involved in the planning and execution of the new Groves hospital.

He asked that the public appreciate the building even after the shine and newness have worn off. He also asked that people not be too hard on those who helped make decisions about the new hospital.

“As you’re in the new hospital you may think ‘why did they do this or why didn’t they do that?’” he said. “It’s bound to happen and I’ve got to let you know it’s not because of lack of effort.”

Feniak added the new hospital will need to continue to change as health care changes.

Finally, he asked that the public remember the new building is just a building.

“As nice as this new hospital is, Groves has never been about bricks and mortar or with the building,” he said.

“Groves is always about what happens inside the hospital.”

Each speaker also took time to thank frontline workers who have been working to help stop the spread of COVID-19.

“All of you on the frontline, including the doctors, the nurses, personal support workers, and environmental maintenance staff at Groves Memorial, are all critical partners in our fight against COVID-19,” Elliot said.

“Please accept my heartfelt thanks for your hard work, your dedication, and your compassion.

“It makes all the difference in the world. You are truly our heroes, keeping families safe in Wellington County.” 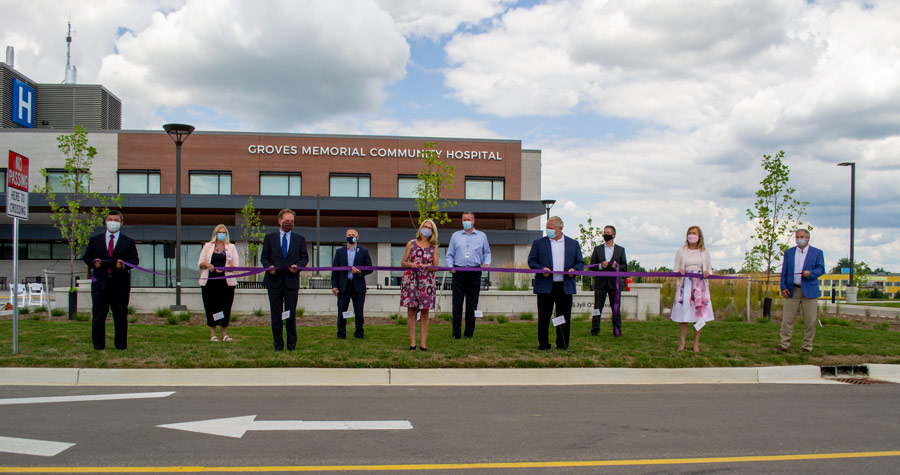