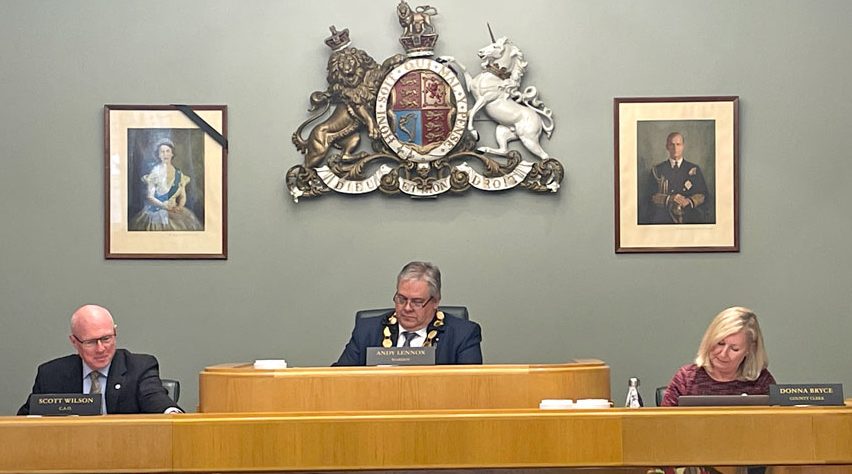 GUELPH – A preliminary draft of the 2023 county budget and 10-year plan includes a proposed 3.8 per cent increase in the tax rate next year.

However, some members of Wellington County council are pushing for a lower rate hike.

“This is a preliminary plan. It has not been approved,” White stressed.

“This is a look at the 10-year capital plan and a look at the budget. This is the first time most of you are seeing the full document. We’ll be following the normal process.”

White added, “There will be a meeting at the beginning of January, where we get into the details and walk through the budget.

“So I would encourage everyone over the course of the holidays, to take a good strong look at the budgets, particularly the committees that you’re on.

“At this point, we’re looking at about a 3.8 per cent tax change, but that is subject to change subject to what goes through the various committees.”

White noted a 2022 budget surplus between $1.6 and $2.5 million is currently anticipated.

The preliminary draft budget projects total spending of around $237.3 million in 2023, requiring a levy (portion of spending supported by local taxation) of $120.4 million. The projected levy is up 6.1 per cent over 2022.

The 10-year plan projects $537.6 million in capital spending over that period.

“Significant infrastructure investment is being made in our network of roads, bridges and culverts,” noted treasurer Ken DeHart in an overview of the plan.

“The county is constructing a new Erin library branch and expansion of programming at the museum and Wellington Place without the need to incur debt or increase taxes to pay for those services.”

“The inflation factor for 2023 represents the current non-residential construction price index. It is anticipated that inflation will return to historical levels and the future forecast reflects this expectation,” DeHart states in the report.

The treasurer also notes staff have managed to keep the projected tax rate impact no higher than 3.6% in each of the nine forecast years beyond 2023, “while continuing to address the infrastructure deficit.”

“Everybody says there’s always uncertainty, but there seems to me to be an exceptional amount of uncertainty these days, around inflation, what inflation impact is going to have, not only on our operations, but on our residents as well,” said Warden Andy Lennox.

“We hear inflation rates throughout the year north of 7%, construction cost inflation much more than that, into double digits.

“And that’s something that we face during our day-to-day operations. But it’s also what our residents face.”

Councillor Mary Lloyd said council should keep the 2023 increase lower than proposed in the draft budget.

“I would like to work to a 2% increase. I know that it’s almost cutting it in half, but I know that our other tiers … are facing these increases as well. And I would hate for us to put an undue burden on our residents at this time,” said Lloyd.

However, he noted, “It’s one thing to throw a number out, it’s a different thing to come up with solutions.

“Staff do what council directs,” White continued. “They’re looking at the 3.8(%) based on what they’re currently facing.

“I would like to support what Mary is saying,” said councillor Steve O’Neill, who suggested using annual budget surplus funds from recent years to keep the tax increase down.

“I believe the last few years we’ve had surpluses that have been well over what we’re talking about this year … And I think we can use some of those, I still call them extraordinary surpluses … to help alleviate this,” O’Neill stated.

“We do have a reserve for smoothing tax increases and I think, after the last couple of years, we should be looking at using some of that.”

“I also agree with Mary’s sentiments. I think, to my mind, 2% is a max, given the ability to pay of some of our residents,” said councillor Campbell Cork.

“I don’t think it’s something that can be solved by saying, ‘Okay, well, you come up with where to make the cuts to find the couple of million to get it down to the 2%.’ I think this is a job for staff.”

Cork added, “I can’t say ‘Oh, forget that bridge, forget that culvert, or forget that building.’ I think staff are the ones that need to be directed to bring us maybe a couple of scenarios that would get us get us to 2% or less.”

“I understand that we need to be responsible about the use of our funds. We do that through the process of our committees,” said councillor Diane Ballantyne.

“I would agree with councillor White, that it’s not about a specific number. It’s about making sure that we are comfortable with the information and the input from staff at the committee level.”

Ballantyne continued, “We’ve provided the lowest back-to-back tax increases in a generation over the last couple of years, partly because of the trying times. But that has led to our ability to be able to borrow funds at a lower amount.

“I think it’s important for us to … remind ourselves that we’re here to provide services for our residents. And that requires that we spend money.

“And we also understand that we have to balance that life is more expensive for everybody, but that means providing the services that our residents need is also a bit more expensive.”

“Over the eight years that I’ve been here, staff have always been very good at bringing that number down to something more reasonable after the committees have met and I think that’s a process we can continue to work with,” said councillor Gregg Davidson.

“Would I like to see something lower than what we currently have? Absolutely, because that gives us more flexibility in the townships. However, as councillor Ballantyne has made comment, we have projects to do here as well.

“And those projects didn’t get cheaper, they got more expensive.”

“I think this is a good process we’re in at this stage. There’s lots of discussion yet to be had,” said Warden Andy Lennox.

“I think we need to look at this holistically. There’s a number of levers that we can use to help make sure that the budget is what everybody can live with … we talked about going back to committees and talking about the projects and initiatives.

Council will hold a special session to discuss the budget in early January.

Possible modifications will be discussed at committee meetings later that month, with a target of approving the 2023 budget at the Jan. 26 council meeting.