Emergency crews responded to the collision,  on Wellington Road 21 near the hamlet of Inverhaugh,  on Sept. 26 at about 6:30am.

One of the drivers, John James Lumsden, 31, of Centre Wellington, was pronounced dead at the scene. Two adult male occupants of the other sedan were transported to a local hospital with serious injuries.

Police say surveillance captured someone breaking in through a front window and removing a quantity of property at about 4:15am. 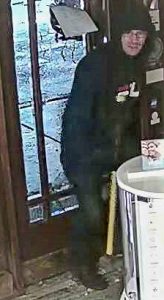 On Sept. 23, Wellington County OPP officers responded to a break-in at a retail store on St. Andrew Street West here.

“The inventory of items removed and their value has not been determined at this time,” police stated in a Sept. 24 press release.

“The person was last seen entering the passenger side of a waiting, older model, dark coloured [SUV] that left west bound on St. Andrew Street West.”

MINTO – On Sept. 19, Wellington County OPP responded to a theft at a car wash on Main Street in Palmerston.

Police say that sometime overnight someone on a motorcycle cut into the coin dispenser machine and stole approximately $500 in currency. A similar incident occurred at the car wash on Mill Street in Clifford.

Police are looking to identify the motorcycle operator. Anyone with information about this incident can contact the Wellington County OPP at 1-888-310-1122. To remain anonymous, call Crime Stoppers at 1-800-222-8477 or submit a tip at www.csgw.tips.

WELLINGTON COUNTY – Local police are again reminding residents to lock their vehicles following a number of recent thefts across the county.

Wellington County OPP auxiliary officers were in the area of Bridle Path in Puslinch Township on Sept. 20 conducting a neighbourhood canvass in response to a number of thefts from vehicles in that area. 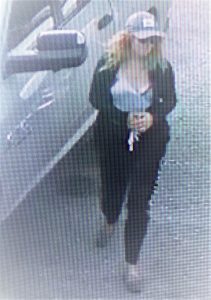 On Sept. 3 at about 8:30am Wellington County OPP was dispatched to a vehicle entry on Gore Road in Puslinch.

Police say surveillance captured the suspect prior to the theft of a wallet from the vehicle.

The OPP is asking for help to identify the person caught on the video (above) and also asking anyone in the area of Gore Road near this time – either with a dash/surveillance camera or who may have saw something suspicious – to contact them.

On Sept. 12 at about 1:45pm Wellington County OPP responded to a “suspicious person” call on Ariss Valley Road in Guelph-Eramosa.

Police say a resident exited his home and saw a white Volkswagon Tiguan parked in his driveway with a man behind the wheel and a woman rummaging through his and his mother’s vehicles.

“The female was startled by the witness and returned to the awaiting vehicle which then sped away at a high rate of speed,” police stated.

Sunglasses, vehicle documents and cash are some of the items that were stolen.

To help prevent thefts, the OPP is reminding everyone to lock their vehicles and remove any valuables and the keys.

MINTO – On Aug. 28 OPP officers from Huron, Perth and Grey-Bruce seized a large quantity of methamphetamine from a vehicle in Minto. Offence-related property, including cash and the vehicle, were also seized.

Aaron Walsh, 33, of the North Perth, was arrested and charged with possession for the purposes of trafficking methamphetamine and psilocybin. He was held for a bail hearing in Stratford court.

On Aug. 29, OPP officers executed search warrants – at addresses on Albert Avenue in North Perth and on Minto Road in former Minto Township – and seized quantities of methamphetamine and psilocybin, along with offence-related property and drug trafficking paraphernalia.

On Sept. 18 Melissa Luu-Tran, 32, of North York, was arrested and charged with trafficking methamphetamine. She was held for a bail hearing on Sept. 19.

Further property valued at about $71,000 was seized during Luu-Tran’s arrest.