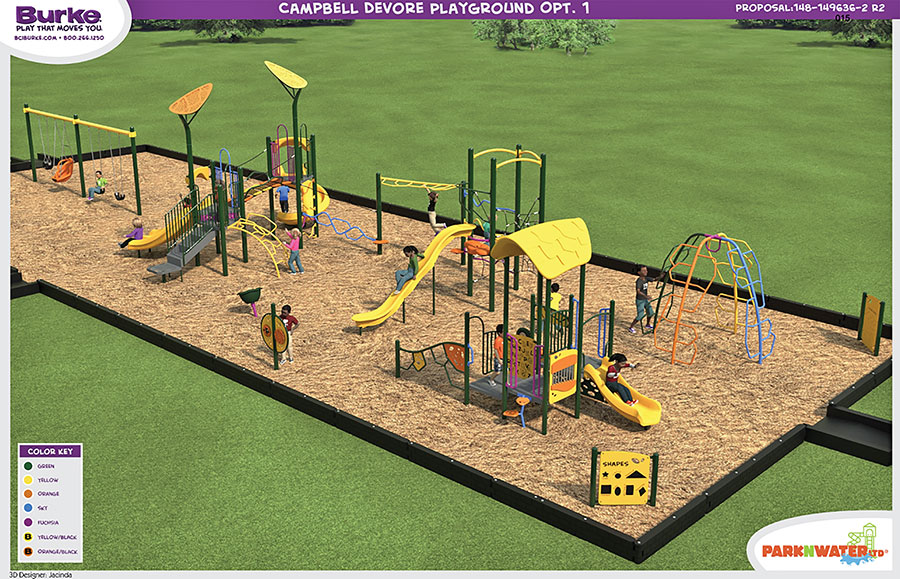 Design rendering - The replacement of the Campbell DeVore playground in Mount Forest is anticipated to happen in June, and take around two weeks to complete. A 3D rendering of the park design is shown here and appeared in the April 5 Recreation, Parks and Leisure committee agenda package.

WELLINGTON NORTH – The replacement of the Campbell DeVore playground in Mount Forest is anticipated to happen in June, and take around two weeks to complete.

Speaking to the township’s Recreation, Parks and Leisure committee this month, Park N Water Ltd. president Stephen Van Meer said the company could begin construction mid-June and wrap up by the end of the month.

Three quotes were submitted in total with the other two coming from ABC Recreation and New World Park Solutions.

“Park N Water Ltd was the lowest cost, met the [request for proposal] as specified and rated highest within the township staff evaluation,” states a report to council from operations director Matt Aston.

Van Meer presented renderings of the park and said the design rises above standards set out in the Accessibility for Ontarians with Disabilities Act, including places to transfer between one portion of a play structure to another, a spinner and panels at ground-level, and visual/auditory elements for those with sensory impairments.

The playground’s surface will be constructed from an engineered wood fibre material and playground elements will have a natural green colour.