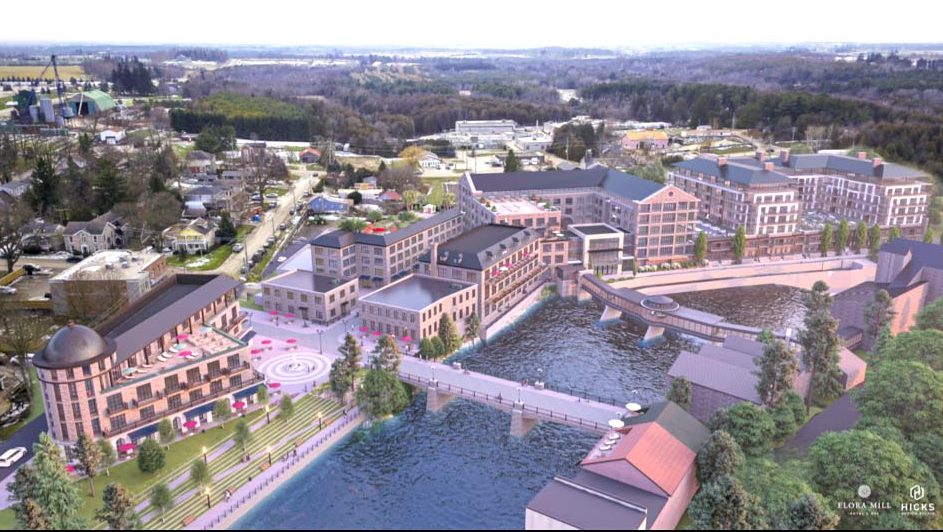 ELORA – Pearle Hospitality has withdrawn its zoning amendment application for the Elora South development and for now will focus on construction of the already approved five-storey condominium building.

“While Pearle has made the decision to withdraw the application at this time, we look forward to working with the township to resolve minor modifications to the zoning bylaw that will be required to facilitate the development in the future,” Urban Solutions planner Matt Johnston wrote in answer to an Advertiser query.

Pearle had been seeking to add an extra storey to two of the buildings in the Elora South plan to add affordable housing for staff, and Johnston and Pearle president Aaron Ciancone spoke at a June 30 public meeting on the matter.

Council approved the Elora South development plan in 2013 and it includes restoration of the Elora Mill and Mill Street West in phase one, which is complete; relocating and rebuilding the historic potter’s foundry, which is substantially complete; and construction of a five-storey condo building, which is about to begin in phase two.

The zoning amendment, if approved, would make the retail/office building and the retail/activity centre four storeys instead of three.

Members of the public who spoke at the meeting were largely opposed and feared allowing extra height in this proposal would set a precedent for other developments in the village.

“All developers are going to push the boundaries,” Geoffrey Wild, owner of the Wild Tart said at the public meeting. “Council has to stand firm on the height.”

In a follow-up interview, Wild called it a “small victory” that Pearle has withdrawn the application.

“It’s a small victory for the town. They (Pearle) want to start the condo block. But there will be a future application, I’m sure,” he said.

In advance of that eventuality, a group calling itself Friends of the Elora Heritage Area has formed and is inviting people who live in historical areas identified in the township’s Cultural Heritage Landscape Study to post signs supporting heritage protection on their lawns. It is also planning a public meeting in the fall.

This matter will be discussed at the July 26 council meeting, but according to a report in the agenda package, Elora South was identified in 2015 as a priority site and qualifies for the grant.

“The purpose of the program is to defer a property tax increase for a period of time in order to help finance “substantial” property improvements that would otherwise be considered cost prohibitive by a property owner,” the report reads listing brownfield properties, heritage properties, vacant or under-utilized properties and projects that help the township meet provincial growth target among the criteria for a grant.

The Elora South site is expected to increase tax assessment value from $2 million before development to $130 million when the project is complete.

That works out to $475,000 in additional tax revenue annually for Centre Wellington and more than $900,000 for Wellington County.

“While a portion of this tax increment would be provided back to Elora South Inc. over a 10-year period (for each phase) in the form of a TIEG, the township and the county would benefit significantly in the long term from this additional assessment and taxation,” states the report.

Township staff are recommending that council approve the application. If it does, the township would also need sign an agreement with Wellington County.