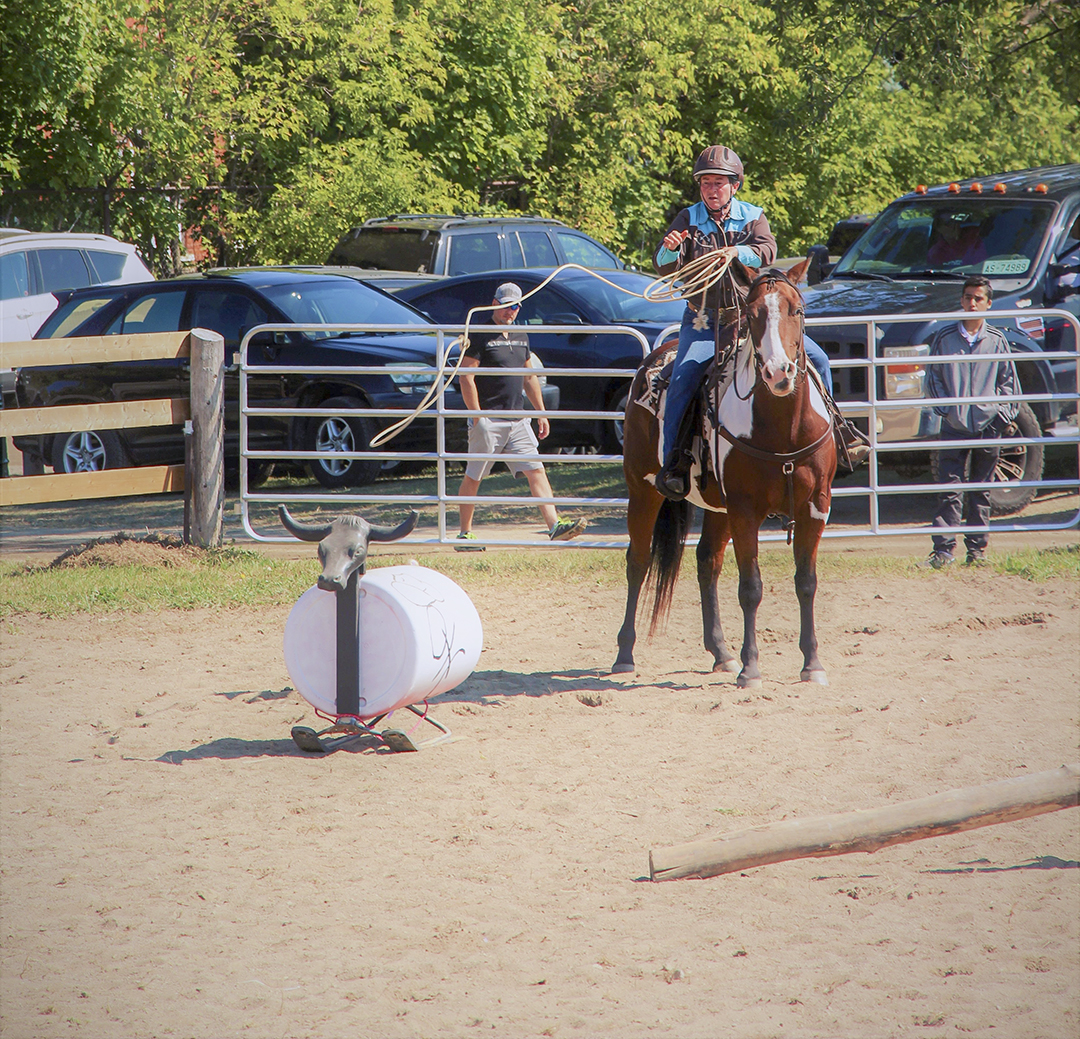 Ontario Xtreme Cowboy (OXC) board member and Orton resident Karen Dallimore is bringing OXC races to Erin on June 9. Here Dallimore is competing in an OXC race with her horse Sweet Grass Jake at the Milton Fair in 2018. Photo by Lianne Head

ERIN – An Ontario Xtreme Cowboy (OXC) race is coming to Erin in June.

On June 9 an OXC race will come to the Erin Fairgrounds for the first time ever.

The race is actually a course of obstacles which would be experienced on a ranch or on a trail.

“If you think of it as an interview to work on a ranch … the judge is your trail boss,” Dallimore explained. “So you have 13 chances to show him that you need and want that job.

“There are 13 obstacles or tasks set up in an enclosed ring and you have to show that you can do them efficiently, and capably and quickly, but always with a mind to horsemanship.”

Horsemanship is one of the key aspects of Xtreme Cowboy Dallimore said.

“There’s nothing like getting the crowd involved, even at the higher levels, the tougher obstacles, those cowboys and cowgirls … they are looking after their horse number one,” she said. “Because if you don’t have a horse left at the end of your interview you can’t come to work the next day.”

The judge will evaluate each horse and rider on how they overcome the obstacle, how long it takes them as well as the horsemanship the rider shows while completing the task.

Just because a horse doesn’t complete an obstacle does not mean that the horse and rider are disqualified.

“Xtreme Cowboy allows you to work to the best of your horse’s ability so you’re not heavily constricted by rules,” Dallimore said. “We’re not that picky.

“We want safe. We want the horse and rider to be comfortable, it’s all about horsemanship. There’s a lot of leeway.”

Entry for the Erin OXC show won’t open until 30 days from the competition date and it is open to participants of all ages and skill levels, with classes for children as young as 7.

Dallimore anticipates many of the participants attending the Erin show will have traveled from a distance, as it is one of the 13 sanctioned shows in Ontario this year.

“We’re just thrilled because this year we’re going right across the province,” she said. “We’ve hit some new areas this year, like Erin, we haven’t had a race here.

“I live in Orton so I’ve just been dying for a race around here so I thought I’d better put my own on.”

She expects there to be 60 races, which would be about 30 or 40 horse and rider pairs. Teams can register for more than one race.

Registration for the races will begin 30 days before the event and entry for spectators is free on June 9.

The races will be judged by Alberta cowboy David Cowley.

The OXC racing comes a day after Horse Day Erin on June 8 when the Wellesley, Ontario-based Cowley will be offering featured clinics.

Horse Day Erin will begin with a cowboy breakfast at the Erin Fairgrounds at 8am and will continue until 5pm.

Kids’ activities will include pony rides, a petting zoo, games, and a chance to meet a “real” unicorn. Erin’s  horse heritage will be on display with archive photos, vintage tack, and horse-related antiques featuring an authentic Erin to Guelph stagecoach.

Tickets are $5 for a child, $10 for an adult and $25 for families (two adults and two children) and are available at https://www.ticketscene.ca/events/23422/. Tickets can also be purchased in person at Budson’s—Provisions for Country Living in Erin.

A percentage of the proceeds will be donated to the Erin Agricultural Society Building Renovation and Accessibility project.

For a full list of activities and times visit https://equineerin.com/events/horse-day-erin/.

For more information or to get involved contact Bridget Ryan at info@equineerin.com or 519-855-4562.