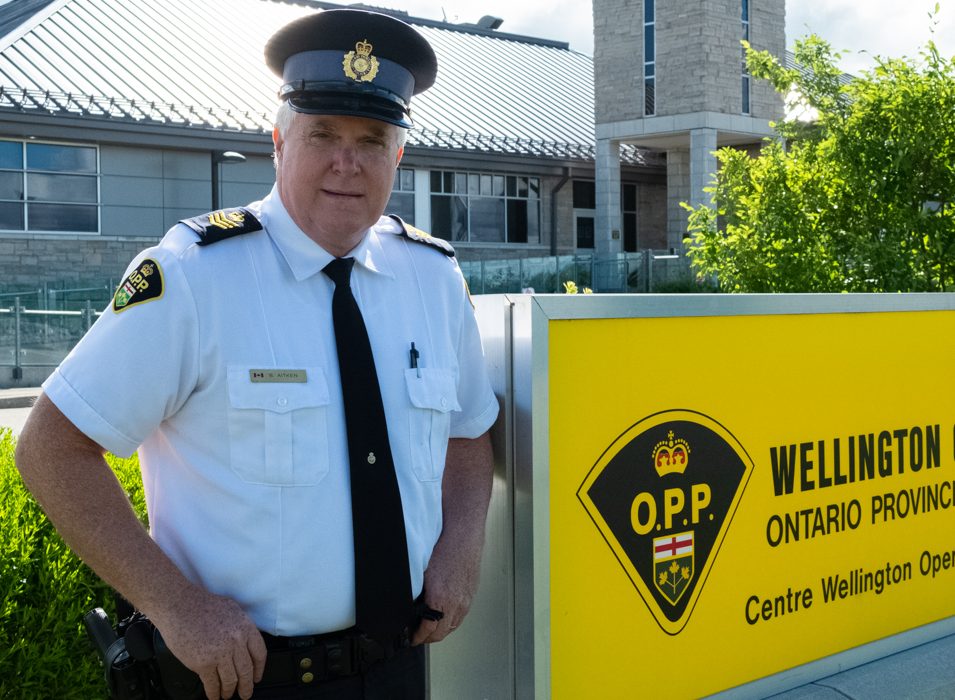 WELLINGTON COUNTY –  After 33 years in uniform working hundreds of cases across the province through a climb up the ranks of the OPP, Bruce Aitken, now a Wellington OPP staff sergeant, says he’s ready to hand over the reins to someone else.

Aitken’s story begins on a 400-acre farm north of Mount Forest outside the hamlet of Holstein where his father raised cattle, pigs and chickens.

If it weren’t for some luck and some political influence, Aitken might still be busying himself with farm chores today.

But at 21 years old, in February of 1988, Aitken joined the ranks of the Mount Forest Town Police as an auxiliary officer where he learned how to police.

“My motto, when I got hired by the Town of Mount Forest was, I wasn’t gonna let them down; always wanting to learn to better myself and give the people my best,” Aitken recently recounted in an interview with the Advertiser.

At the time, the town had six officers and hiring decisions were made by local politicians—he credits the late Ralph and Bruce Martin with allowing him to get his foot in the door.

By the time the department disbanded in favour of contracting policing services out to the OPP in 1990, Mount Forest had just 3,000 residents.

“I was a young, naive officer. I was very fortunate, I think, that the community let us learn the ropes of policing and keep our community safe and I still feel that today,” he said.

The difference, he continued: “I’m not young and naïve, I’m old and naïve.”

Aitken began reconstructing accident scenes in 1992 continuing the work until ‘97.

In between, he and his wife Michelle became parents with their first son, eventually raising three boys together.

“I was on-call for many different cases,” Aitken said of the years, “and she was very patient if I had to step out to take calls or miss different functions for the three boys, whether it’s graduation or a birthday party, because of some of the work I got involved in; I was very fortunate to have such a strong support network for sure.”

Putting his meticulous note-taking habits to good use, Aitken got his first taste investigating major crime with a July 1994 attempted murder of a woman in her 60s, who was brutally beat and left for dead behind an Arthur business.

Though the victim did recover, she spent “considerable time” in intensive care.

“It was one of the first few cases in Wellington County where we utilized DNA during the investigation,” Aitken said.

In 1994-95 he would work another major case, this time investigating a string of bank robberies in Bruce, Arthur and Fergus.

In both cases, investigations led to arrests and convictions with the person behind the Arthur beating remaining behind bars today.

“I always approach [cases] the same way … to not only be the voice of the victim, but to solve the crime and bring the person responsible to court to face justice,” Aitken said.

“Those were two cases that stick out; certainly the attempt murder, the community of Arthur and us were very shocked and appalled by it,” he said, going on to say, “getting the chance to take on and work through the case was something I was very fortunate to do and I learned a lot from it.”

A move into detective work consumed the following two decades between 1997 and 2017. Aitken would work cases in Walkerton, investigating the 2000 e-coli water crisis, and London, investigating the 2006 executions of eight Bandidos motorcycle club members, before returning to Wellington County to investigate one of the province’s most notorious murders.

Eight-year-old Tori Stafford was abducted from Woodstock in 2009. For the next two years Aitken worked the case as an “acting” detective sergeant with team leaders reporting to him on the case.

“We had various tips and assistance from the public; [it] was a volume of information coming in I’d never seen happen before in all the cases I worked on and it took [a] large team, we had a very, very large team of investigators from all over the province,” Aitken said.

By May that year, police had a handle on what had happened, spending months searching before Stafford’s remains were discovered in a heavily wooded area southeast of Mount Forest in July 2009.

In 2012, Aitken finally got to testify in court on the case, with both suspects receiving life sentences.

“That was a very challenging case for us all,” Aitken said, pointing out Stafford would have been 21 years-old this year.

“It certainly had some impact on me, no doubt about it … the innocence of youth as such as one like little Tori could have been any one of our family members.”

In 2017, Aitken donned a crisp, white uniform shirt for good, taking an administrative role as a staff sergeant with Wellington OPP, where he worked closely with a variety of community partners from politicians through to the medical system.

“It’s very important, those partnerships that we have are still the glue of policing in today’s world,” he said.

At the beginning of this month, Aitken entered into year 34 of his law enforcement career.

“That’s where I felt [it was] time for me to kind of take a step back and hand off the reins to others,” the 55-year-old said, explaining the decision wasn’t made overnight and came with plenty of mixed emotions.

Aitken’s official retirement date is July 31 with his last day behind the desk on June 25.

But it won’t be his last in uniform. This coming fall, he starts in a supervisory role with the Wilfrid Laurier University special constable service.

“I still feel like I got some things to do and give,” he said.

“It’s going to be a real change to hear something in the Wellington Advertiser instead of it happening live,” he said laughing.

“I think it [has] been a really rewarding career serving the community, I have felt really honored to do that.”