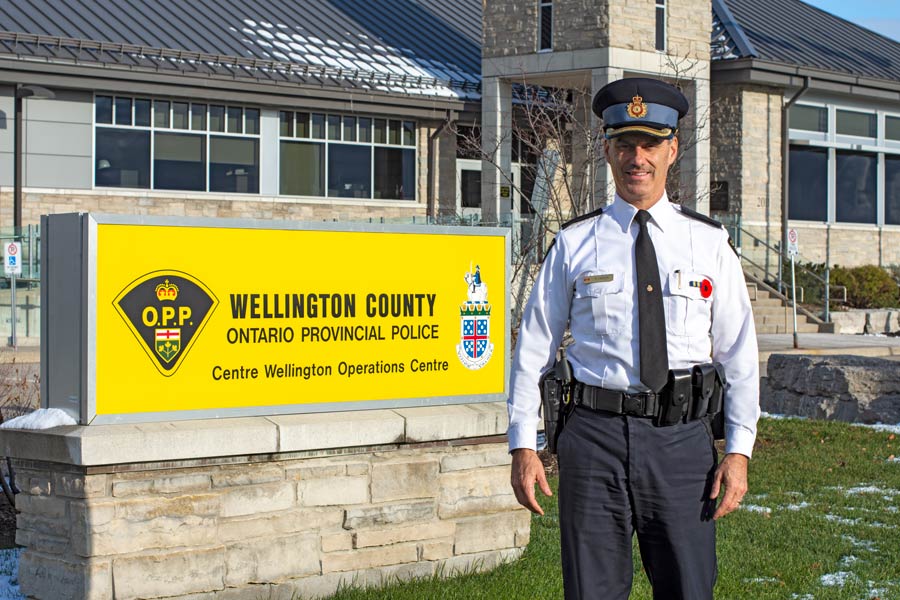 Retirement - Wellington County OPP Inspector Scott Lawson is set to retire on Nov. 22 after eight years with the local detachment and 33 years with the OPP.
Photo by Jaime Myslik

However, on Nov. 22, Lawson will leave his post with the county detachment and retire from the OPP.

“I’ve given my heart and soul for 33 years,” Lawson said in an interview with the Wellington Advertiser.

County officials say they will miss the inspector, who came to the Wellington County OPP in 2012 after an adventurous policing career.

“We want to just thank you for all the leadership that you provided to our county OPP over the years,” said Warden Kelly Linton at the county council meeting on Oct. 31.

“We’re the envy of Ontario for sure when it comes to OPP services and a lot has to do with your leadership.”

“Inspector Lawson has brought so much more to us than just policing,” said Anderson, noting Lawson has been named a Corporate Citizen of the Year by the Centre Wellington Chamber of Commerce.

“If you look into your (agenda) package there’s so many things that have come forward that weren’t policing, but more in community involvement and how police deal with themselves within their group.”

Lawson’s first application to the OPP was rejected and he accepted a job in Stratford from 1986 to 1990.

“I went through a bunch of stuff,” Lawson said. “I didn’t know Stratford from Nowhere, Ontario … no idea, but they took a chance on me and I loved it. It was great.”

He left the Stratford police force when the OPP accepted his application in 1990. He chose to join the OPP because there seemed to be more opportunities there across the province and in specialized areas. His first ever post was in Moosonee.

“I went to the great white north,” Lawson said. “Born and raised just outside of Burlington so … it was a bit of a shock but it was a great adventure and I actually look back now was like, ‘I’m glad I had that experience.’”

He said he never experienced anything like that again.

After two and a half years in Moosonee, Lawson moved to the Mount Forest detachment in 1992 and had his first taste of life in Wellington County. In fact, he built a house in Centre Wellington in 1998, which he has lived in ever since – and he plans to remain there even after his retirement.

While in Mount Forest he joined the OPP Golden Helmets and when the World Trade Centre in New York was attacked, Lawson was sent to Sarnia on his motorcycle to help with the Blue Water Bridge closure because all border crossings were closed. Cars were stuck on the road for several days until the bridge re-opened.

“My job on the motorcycle was to patrol up and down the 12 kilometers of traffic that was backed up and make sure that they were safe, pull out all the live haulers anybody who had cattle, perishable (items, etc.) we had to pull them out of line and get them across the wrong way on the highway so we could get them … off-loaded at a farm so they wouldn’t lose their load,” he explained.

He was in Sarnia for about a week and with the motorcycle he was mobile enough to do the necessary weaving in and out of the cars parked on the road.

“One of the bigger challenges in the end, when the bridge reopened, was people who had abandoned their vehicles … and truckers who were sleeping,” Lawson said. “We spent hours getting people back to their cars.”

He said those challenges were unexpected.

“It was a lot of work to get it re-established because we couldn’t just have one lone car where the driver had gone AWOL,” he said. “We needed everybody to move.”

Shortly after he was promoted from Mount Forest to work at Queens Park in Toronto in March 2002.

He added it was a different kind of policing because he was now protecting buildings and people who were in a concentrated setting.

“We were very much at a real high level of readiness and alertness around what was happening,” he said. “It was quite a neat experience though to do that, and too it was new to the government.

“It was new to visitors of the government and just staffers and people seeing us around and everybody knew why.”

He did all of this while commuting two hours each way from his home in Centre Wellington.

Lawson was stationed at Queen’s Park during the blackout of 2003 when the majority of Ontario lost power for several days. He stayed downtown for several days to help maintain a level of protection.

His job was to keep government employees and officials safe while also keeping the buildings safe.

“Everybody was wondering what was going on, including us,” he said. “And we’ve got 5,000 government employees and a high rise and elevators and people trapped and we had high ranking government people.

“We had a provincial Emergency Operations Centre, we had the Centre for Forensic Science that had exhibits and evidence.”

Lawson was then seconded by the government to work as the liaison between the Ministry of Community Safety and Correctional Services and the OPP.

The challenge was knowing what information to give those outside of the OPP that was appropriate and permitted.

“It really gave me a great insight and it allowed me to survive because I was one bad move and … they’d be like, ‘Scott who? Where did he go again?’ Literally.”

He was then seconded back out and worked with the deputy commissioner’s office in Orillia before he moved on to managing the high-end traffic incident management team in the GTA.

“These teams came in to benchmark high-end collisions and expedited the investigation so they could get the highway cleared quicker to allow the economy to start flowing again,” Lawson explained.

He was in that role when the Sunrise Propane plant in North York experienced an explosion in August 2008.

“We had the entire highway shut down for a few days,” he said. “Never been done before. Sunrise was just in Downsview, again, lots of ripple effects and impacts.”

Lawson also managed the roads for the motorcades of visiting dignitaries during the G8 and G20 summits in 2010.

He had to ensure overpasses and roads were clear in the GTA along the route the motorcades were taking when travelling from Huntsville to downtown Toronto.

Lawson was promoted to commander in Aurora where he policed provincial highways in north/south routes out of Toronto.

Then in 2012 he had the chance to become the commander of the Wellington County OPP detachment.

“It was absolutely the best decision I probably made most of my career,” he said.

However, there were some adjustments, Lawson said, noting he had to learn how to work with a police board.

“It was just significantly different … when I came here having a police board and having to answer to the board, if you will, seven mayors and seven municipalities … really investing in what happens in a country,” he said.

Since Lawson became commander the OPP has created the IMPACT team for mental health calls and has partnered with government and community groups on various projects.

One of those is the Here4Hope county-wide mental health initiative. Although Lawson is retiring he said he’d remain involved in the initiative.

“That might be a little bit of a legacy piece that I’ll leave amongst a few things,” he said.

Lawson explained he’s going to take a bit of a break before he delves into any more community involvement.

“I’m excited to go there but I’m not sure how to feel … this is all I’ve known,” he said. “But I still think I got a little work life left in me.

“So I’m going to give my all over there and see where that takes me.”

“There hasn’t been a partner anywhere, whether it’s from the county or member municipalities or any of our non-government partners or whoever … we have sort of touched everybody in terms of fitting into the equation somewhere,” Lawson said.

“And that has been super impressive for us and … the benefit has been absolutely for the community and for the residents.”

Lawson’s last day is on Nov. 22 but he is officially retiring on Dec. 31. He said his replacement has not yet been hired.

“It’s very bittersweet,” Lawson said. “There’s just something rewarding about giving back to your community and feeling like you’re seeing the fruits of your labour. That’s pretty motivating.”