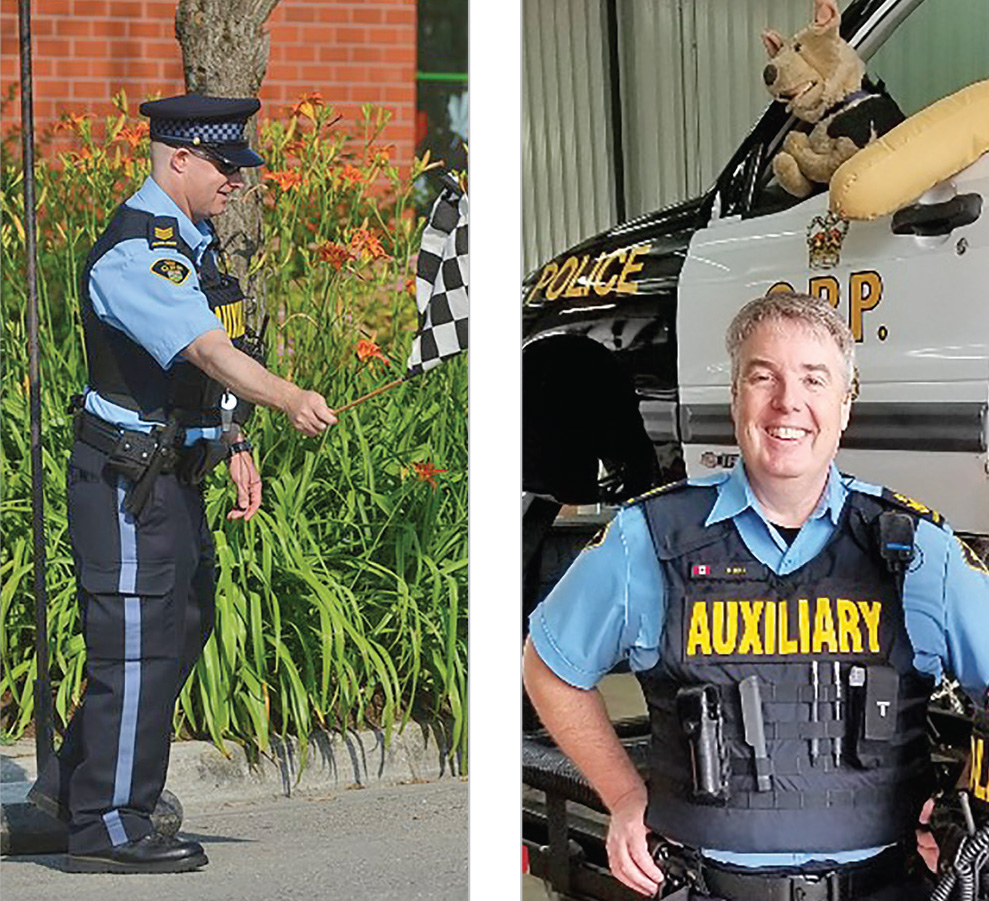 WELLINGTON COUNTY – It’s been a long year for the Wellington OPP’s auxiliary unit members, who have had to tough out the wait to don a uniform once again.

Celebrating its 60-year anniversary this year, the unit’s milestone has been marked with little fanfare and some social media posts instead of the full-fledged formal ceremony with a mass inspection involving auxiliary officers from across the province.

“It’s a fairly big event,” said auxiliary unit commander Jason Swan, who has been an auxiliary member for seven years.

But former Wellington auxiliary member Brad Hull, who is now with the OPP’s West Region as an auxiliary administrative staff sergeant and has been a member for 13 years, said COVID-19 “completely messed everything up.”

“It would have been really, really nice to get together with everybody … just the opportunity to have that large of a group of like-minded and committed volunteers together in one location,” Hull said.

“There’s been a lot of evolution and change in the structure and organization and involvement of the auxiliary program,” Hull said, with the program now facilitating a roster of volunteers trained in policing as a compliment to regular-force constables in the event of emergent situations where there aren’t enough staff.

Every auxiliary member is a volunteer, with the local detachment’s 11 members holding full-time jobs when not in uniform.

Hull is a software salesman to government and Swan is an elementary teacher at John Black Public School in Fergus.

“Within our unit we have auto mechanics, we have fire fighters, we have postal workers … it’s a pretty wide range of people that we have with us right now,” Swan said.

Despite being a volunteer role, there are still stringent requirements, including training at the Ontario Police College and on-road training, before members are handed a uniform, handcuffs, or the keys to a cruiser.

Prospective members need to meet specific qualifications and pass medical, psychological and financial assessments along with a detailed background investigation.

“We have a lot of responsibility,” Swan explained.

Swan always had an interest in policing and heard about the program through a friend who encouraged him to join.

“It sort of scratches that itch so-to-speak … it’s a way that I can fulfill that interest and still keep my other passion,” he said of policing and teaching.

Hull said the program provides a unique way to be involved with the policing community and give back to his own, having joined the unit after hearing about it from a neighbour.

In addition to staffing community-based crime prevention initiatives and events like the Highland Games and “stuff-a-cruiser” for the Centre Wellington Food Bank, auxiliary members can also go on marine patrols and attend 911 calls with regular officers on the road.

“That can run the gamut in the policing world from a 911 hang-up to a truly life-threatening domestic call,” Hull said.

Volunteers had been able to squeeze in some community-based initiatives, but as soon as lockdowns began to hit, the program was largely paused, save for some online training.

“It’s been horrible, in a nutshell,” Hull said laughing. “We’re anxious to get back out and see everybody again; having been in Wellington for 13 years in this, there are people that I see every year at the same events.”

In mid-June, volunteers were permitted to emerge from limbo and participate in community initiatives, events and marine patrols once again.

“Really the only thing that we’re not doing right now are in-car patrols,” Swan said.

“I think everybody is just anxious to get going again,” Swan said, adding that some members have strong connections to community events missed over the pandemic.

Hull mentioned the local detachment is actively recruiting for their auxiliary unit, saying the volunteer role is “unlike anything else out there.”

“With COVID, recruiting has really slowed down, so it hasn’t really kept pace with the people we’ve lost,” Hull said of those who have gone on to either joining the OPP regular-force ranks or municipal policing agencies.