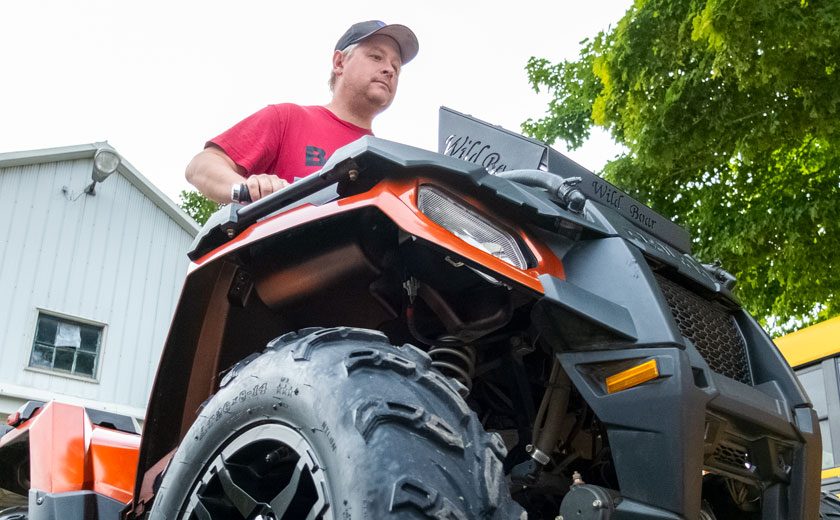 On-roading - Greg Roelofsen drives an ATV onto a trailer at his Arthur residence. He and others want to see off-road vehicles permitted on county-owned roadways. Photo by Jordan Snobelen

ARTHUR – Greg and Amanda Roelofsen load up a trailer and cart their ATVs outside of the county every weekend, spending time in the great outdoors with friends from Fergus, Elora, Alma and Arthur while bouncing their way along forested trail systems.

The couple reached out to the Advertiser along with three other county residents to express support for all-terrain vehicle use on county-owned roadways.

The county’s seven municipalities have recently implemented off-road vehicle (ORV) policies for their roadways after provincial legislation regulating their use recently changed.

“You go to a trail somewhere else and your money goes into their community,” Amanda said, speaking of the cash forked out for food, shopping, and gas when travelling.

“It’s the same as when the snowmobilers used to come to Post Time; they came from everywhere to eat at Post Time and then they all went snowmobiling,” she said.

The couple say if county roads were to open up for off-road vehicle use, a maintained trail system could be started here, bringing outside travellers and money into the surrounding communities.

According to the Ontario Federation of ATV clubs (OFATV), the closest marked trail system is found in Holstein, north of Mount Forest.

On May 11, the county’s roads committee met virtually, discussing a request initiated by Minto council to permit ORV use on county-owned roads.

Committee members discussed points for and against ORV use, speaking anecdotally of complaints they had fielded from the public surrounding ATVs, concerns surrounding liability and road safety and the prevalence of ORV users who simply want to use county roads to travel from one spot to another. 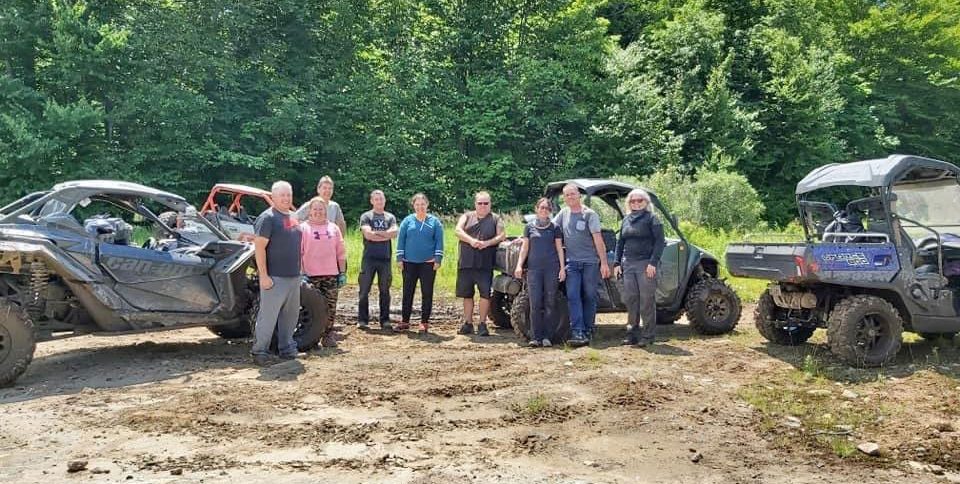 The Roelofsens pictured with their ATV riding pals. Submitted photo

The Roelofsens say they’re safe operators. Their two ATVs are insured and plated, they wear helmets and safety gear, and speed limits are adhered to on trail systems, which require permits from ATV organizations like the OFATV.

They emphasize being able to drive on county roadways would simply allow access from one place to another, instead of having to load up a trailer and drive out from the county.

“To me it’s a lot safer to have a four-wheeler on the road than a snowmobile; the snowmobiles have always been accepted, the four wheelers have not,” Greg stated.

Minto passed a bylaw in April allowing OVRs on their roads, a move in the same direction as other Wellington County municipalities—the exceptions being Erin and Centre Wellington.

Erin Mayor Allan Alls recently put forward a notice of motion for the town to reconsider its complete restriction of ORVs on the town’s roads, proposing to allow use on farmlands and countryside roads while maintaining restrictions in urban areas.

At the county, a motion was carried before summer’s adjournment to have the roads committee report back to council this month on: the potential impacts of allowing ORVs on county roads, considerations to allow for municipalities to opt out, comment on enforcement from the OPP, feedback from lower tier councillors, and other township bylaws allowing for ORVs on roadways.

The roads committee meets next on Sept. 14 at 9am.