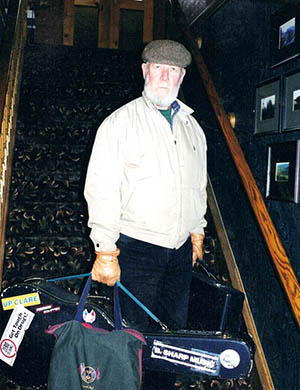 left us suddenly on Sunday, May 30, 2021 while leaving out the door to be on his way for a game of tennis. David will be missed by his loving wife Patti and family, friends across Canada and in Perth Australia, brother in law and sister in law John and Judy Alair and family of Komarno, Manitoba, brother in law and sister in law Bob and Donna Danahy and family of Belleville, Ontario and David’s oldest childhood friend Bill Wall in Saskatchewan. David’s whole language was music and was his gift. His best instrument was his voice. David had a band in the 70’s with 3 friends and continued to play music, being a busker playing at the Shepherds Pub, Elora Mews and playing with friends at the Elora Legion for over 30 years. David was a Traditional Shanachie telling stories in song in Celtic lore and the sad bittersweet country songs. Some of his favourite musicians were; John Prime, Christy Moore, Jimmy Rogers, Van Morrison and The Band and old blues but you all know there are too many to mention. With David’s musical talents he was also a Luthier (Instrument maker) who worked with exotic woods from Australia, courtesy of his dear friend and family member Davy Billing, a fellow musician and Patti’s son in law. David and Patti’s song was “Gypsy Davy” because it really was love at first sight and David had such a Gypsy spirit. David and his sister Maxine (predeceased) were raised by his single mother, Florida in Winnipeg, Manitoba. He had first learned carpentry from his uncles (His mother’s brothers). David was a Buddhist. His maternal grandfather Wilcox was from Dublin, Ireland and his maternal grandmother was Metis and French Canadian. David would describe himself as a Sask. Farm boy. He loved his Native Home. Loved nature and all things natural. In David’s early life he served in the Canadian Military, was a veteran and learned surveying in the artillery. After the army, he worked as a newsie on the C.P.R. Loved trains. Went from Winnipeg back and forth across the prairies. He then worked in Toronto laying out tunnels. David’s hobbies included; repairing instruments, making silver jewellery, flew planes and gliders and had a Pilot’s license, voracious reader; books were important to him, great cook, liked his tot of Irish whiskey, photographer mostly of landscapes; EL AURA Photography (It’s been said “Some of the best art of Elora in ages!”), Tai Chi with friends and a tennis instructor. A long well lived life – never without his hat!

C.P.R Window
The night train across the Prairies
Passes small villages
With their few trees
Plowed snow in streets
Is gone again
Into the next hundred miles of dark snow