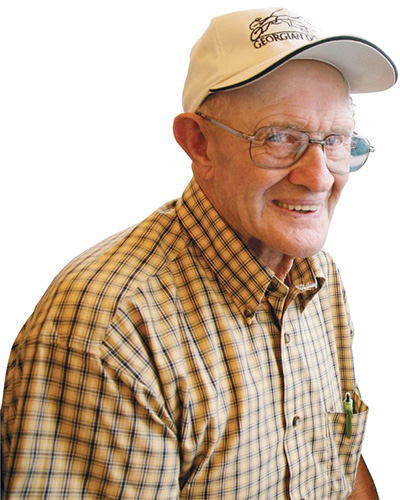 Famed Harness Horse driver and trainer, Keith Waples passed away peacefully at Guelph General Hospital on Friday, May 7, 2021 at the age of 97. He will be sadly missed by Eileen, his loving wife of almost 75 years, and his four children, Barbara Lennox, Donna Galbraith (Mac), Karen Hauver (Maurice) and Gord (Denise), as well as his 9 grandchildren, 17 great-grandchildren and one great-great-grandchild. Keith was the son of the late Jack and Bertha Waples and was predeceased by sisters, Jean Swan and Annabelle Caffry, and by his grandson Jason (Jay) Waples. He is survived by sisters Dorothy Rumney of Wasaga Beach, Peggi Diebel of Squamish, B.C. and Mary Jane Burnett of Orangeville, and brother Murray of Barrie. An inductee in the Canadian Sports Hall of Fame, the Canadian Horse Racing Hall of Fame and the Harness Horse Hall of Fame in Goshen, NY, Keith was also honored by his peers as Horseman of the Century. He drove and won his first Standardbred race at the age of 12 in 1935 at Sundridge, ON. His yellow and blue silks last appeared in a race when he was 81 in 2005, but he continued to train a few horses until just a few years ago. Keith was also instrumental in racetrack ownership as he and James Keeling pioneered Orangeville Raceway, Cloverdale Raceway (now Fraser Downs) and Sandown Raceway in B.C. In recent years track visits became less frequent, but his TV was usually tuned to the Horse Racing Channel and he followed industry happenings on the Standardbred Canada website. As per his wishes, his body has been cremated and a small private funeral will be held at the Gilbert MacIntyre and Son Funeral Home in Guelph. The service was live streamed on Wednesday, May 12, at 11:00am, link can be found on his memorial page at www.gilbertmacintyreandson.com. A Celebration of Life will be held at a later date. As an expression of sympathy, donations to the Guelph General Hospital would be appreciated by the family in recognition of the excellent care that he and Eileen have received there over the years. Donations/online condolences can be made through the Funeral Home at www.gilbertmacintyreandson.com