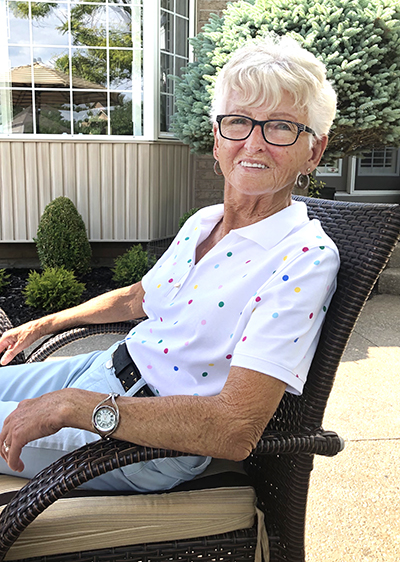 Ria was born on a small dairy farm in the eastern part of The Netherlands. She was the 7th child in a Catholic family with 10 children. She remembers a warm kitchen with plenty of food, a lot of work (like peeling 80 potatoes each day!) and also a lot of play with siblings and school friends. She loved nice clothes and refused to wear wooden shoes like the other kids. She wore the same pair of leather shoes for many years and polished them every night before going to bed. She went out to work as a mother’s helper at age 12 and carefully saved her earnings until she was able to buy her first bicycle at age 17. The Second World War was a difficult and memorable part of her early childhood. She fondly remembers being in bed with her younger sister when a Canadian soldier came upstairs to announce the war was over and gave them chocolate. Ria wanted to get an education and enter the work force so she could earn money to give her children what she never had. She became a nurse and worked at a hospital until she married. She was careful and selective about choosing a partner and in 1963, she married Jan Tettero. Jan also came from a Catholic family with 10 children and he was “very smart” and eventually became an engineer and the head of the technical department of Dikkers Valves. Ria and Jan had two daughters: May Britt and Ildico. Ria shared her values with her daughters: The importance of education and frugality, keeping the family together at all cost, cleanliness, good food and exercise and that style and appearance matter. In 1978, the family moved to Canada as Jan had been appointed as Director of Dikkers Valves Canada. Ria took pride in keeping a clean house and looking after her family. She worked as a private nurse with the elderly. When Jan retired, they moved to Rockwood, Ontario. Shortly after, Jan became terminally ill and Ria cared for him at home until his death in 2004. After this, Ria took over the gardening and made it her passion to make sure her lawn, bushes, trees and flowers were all “perfect”. She was an avid walker and during her walks, she loved to chat with whoever she met on her way. She found it easy to make friends as she was friendly, interested in other people and had a good sense of humour. She especially loved babies and the elderly. At age 70, Ria met her second life partner Eldon Stantz at the bowling alley in Florida. They shared a home in Florida and many enjoyable years. They went on trips, attended church, went for walks and swims and were often seen holding hands. Ria died at home, peacefully, on January 5, 2022 in the presence of her daughter May. She is survived by, and deeply loved by: husband Eldon, daughters May (Alex) and Ildy (Huw), grandchildren Sky, Phaedra (Omer), Sascha (Cheyenne), Brennan and Aidan, and great grandchildren Chaska, Mextli and Neha. The family thanks Dr. Potter for her warmth, generosity and attention to detail. We are also grateful for all the neighbours and friends of Ria who have shared their appreciation of her with us. Arrangements entrusted to Gilbert MacIntyre & Son Funeral Home, Dublin Chapel, 252 Dublin St. N, Guelph. Service details to be announced at a later date. To honour and remember Ria, donations can be made to the Rockwood Conservation Area or to Operation Smile Canada. Donation cards are available at the funeral home (519-822-4731) or online at www.gilbertmacintyreandson.com