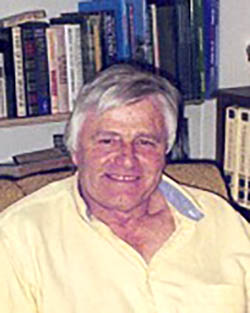 1937 – 2020 Passed away peacefully at Groves Memorial Hospital in his 83rd year. He leaves behind Margaret, his loving wife of almost 63 years, as well as his children Graham (Anita), Caroline, Paul “Moose”, Anthony “Snoop”, and Michael (Joanne). Also mourning their loss are 11 grandchildren and 10 great grandchildren. John was born in England and raised on a farm in Gloucestershire County. As a newlywed in 1958, he emigrated from England to Elora, where he continued in the farming business for the rest of his life. He was an enthusiastic skydiver and in his younger days had over 200 parachute jumps to his record. He found great enjoyment in playing a match of squash or tennis, but nothing gave him more joy than to watch his children and grandchildren playing sports at many different arenas and sports fields throughout Ontario. There will be a private family service held with his casket, which is being buried at the Elora Municipal Cemetery. A celebration of John’s life will be held later in the spring. Arrangements are entrusted to The Graham A. Giddy Funeral Home, 37 Church Street East in Elora. As an expression of sympathy, the family would appreciate donations being directed towards the Kidney Foundation of Canada.