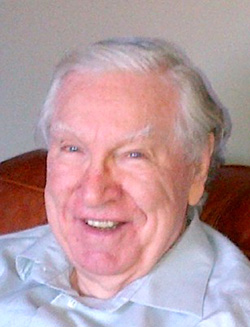 Peacefully at Groves Memorial Hospital, Fergus. Husband of the late Muriel, proud father to John (Lorie) and David. Loving grandfather to Sean, Elizabeth, Jacob, Isaac and Ben. John was born and raised with his brother William in Kilsyth Scotland. He served in the British army from 1951 to 1953 and had fond memories of his posting in Hamburg, Germany. His time in the military instilled a love for travel that found him on the Queen Elizabeth to New York in 1954 and then on to his aunt’s boarding house in Guelph. Later while living in Kitchener he met and married Muriel Moffatt of Galt in 1957. After working in television repair he entered a career in teaching that began in a small schoolhouse in Snowball Corners, followed by schools in Guelph and ultimately retiring after many years at James McQueen public school in Fergus. He was especially proud of the musical productions he organized and directed while there. Some years his grade 6 classes performed up to 4 performances for 800 people. John was very handy with no project being too large. He built his own home in the country and even installed his own in ground swimming pool. He was an avid reader of everything from fiction to technical manuals. Retirement found him sailing out of Midland into Georgian Bay on his cherished sailboat, “No Worries”. He also enjoyed many cruise vacations that took him all over the world. His final cruise being in March of this year. The family would like to thank Kirsteen and team from Qualicare, especially “My Brenda”. Their outstanding care and devotion allowed him to remain in his home for as long as possible. We would also like to thank the doctors and nurses for the wonderful care provided over his final few days. Friends will be received at the Graham A. Giddy Funeral Home in Fergus, on Sunday, October 25th, 2020 from 2:00 to 4:00pm. To attend visitation, please register on our website by selecting RSVP under Service Details below and select a time to visit, or you may call the funeral home, 519-843-3100 to register. Masks are mandatory. Memorial donations can be directed to the Heart & Stroke Foundation or the Canadian Cancer Society.