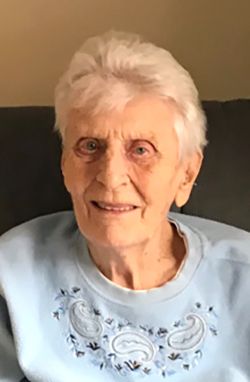 Joan passed away peacefully at the Wellington Terrace in her 85th year. Joan was the wife of the late A. Wayne Mason (June 8, 2012). Sister of Carolyn (Bruce) Marchand, Diane (late Bill) Guckenberger, and John (Brenda) Elchert. Sister-in-law of Jayne Youngblut, Crystal Mason, and the late Guy Mason. Joan is survived by 9 nieces and nephews. Daughter of the late John A Elchert & Marie Hauser. Joan was a retired employee of Lear Corporation in Kitchener and a former employee of Burns Meats. Joan will be missed by many of her friends in Fergus and Kitchener. On behalf of Joan, we would like to thank all of her caregivers over the last 4 years. As per Joan’s wishes, there will not be a visitation or service. Cremation has taken place. Memorial donations can be directed to The Hospital for Sick Children or The Heart & Stroke Foundation. Arrangements entrusted to the Graham A. Giddy Funeral Home.