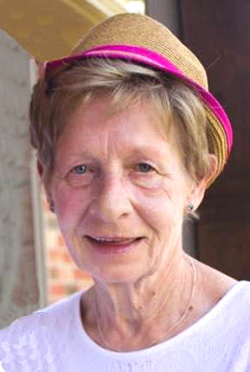 Shirley Ann Mackie (née Peesker), age 73, of Puslinch, Ontario, passed away on August 7th, 2020 after a very long and hard fought battle with brain cancer brought on from an earlier melanoma. Shirley was born on February 11, 1947 to Nick and Jean Peesker in Ituna, Saskatchewan. Soon after, the family decided to move east for better opportunities in Ontario. Shirley and her brothers — Bob, who was 2 years younger than Shirley and later Jim — grew up in Strabane, Ontario. It was while at Dundas District Highschool (better known as DDHS) with her dear friend Nancy Smotek that Shirley met her sweetheart, Don Mackie. Don and Shirley married in 1965 and soon welcomed their daughter Angie and son Keith. They spent their initial years in Kilbride and then settled in Puslinch, where they would remain. They both worked hard in those early years to make ends meet. For her part, Shirley took on a job as a waitress at the Mohawk Racetrack working nights and weekends while raising her two young children. When the kids were a little older, she went back to school for a secretarial diploma from Conestoga College. After that, she spent many years working at the TD Bank. For over 45 years Shirley and Don welcomed family and friends to their home every Christmas Eve. Meals and fellowship were legendary as it provided a focal point to get together for at least that one time each year. Shirley was blessed with many friends. Her friend Nancy said it best, Shirley epitomized the expression: “True friends are like diamonds, precious and rare.” There are too many wonderful friends to mention and many came to visit and called Shirley during her final days. A special thanks to all the wonderful caregivers who helped her in these past few months. When Angie and Keith married, she welcomed her son-in-law Gord and daughter-in-law Donna. There was a very special place in her heart reserved for her two beautiful granddaughters, Cierra & Jacey. She just needed to see their faces for hers to light up from ear to ear. During her last years, Shirley faced the fight of her life and she fought it valiantly and with great dignity. With a brain cancer diagnosis at the young age of 65, despite an initial diagnosis that gave her only 6 months to a year, she faced it head-on and beat all the odds, again and again. Shirley refused to accept her diagnosis and continued fighting for eight years. In the end, after an unbelievable battle, she was tired and it was time to say goodbye. Shirley has left a lifetime of comforting memories for all of us who love, respect and cherish her. Shirley leaves her husband Don of almost 55 years, her daughter, Angie Mackie (Gord Muschett), son Keith (Donna) Mackie her granddaughters, Cierra Fasken & Jacey Mackie, brothers Bob (Linda) Peesker and Jim (Lori) Peesker, many loving nieces and nephews and dear friends and neighbours. Please sign the Tribute Wall at kitchingsteepeandludwig.com