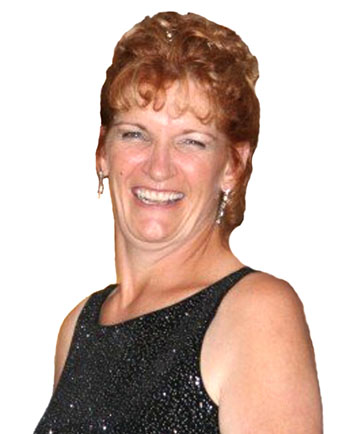 Jessie “Christine” Edgar, passed away peacefully at her home, February 19th, 2020, after finally deciding six years of cancer fighting was long enough. When she was first diagnosed, she was told she had about three years to live, but those that knew her well aren’t surprised that she was too stubborn to give in before she was good and ready…and had received at least one full year of her old age pension! Chris was a mother, grandmother, sister and friend, born January 14th, 1954, middle child of the late Leslie and Christine Miller. She leaves behind a family that she was very proud of. Born in Hamilton and raised in Smithville until she was a teenager, Chris moved with her father and some of her six siblings, to a chicken farm in what was then Egremont Township. She went to Highschool in Mt. Forest, where her graduation yearbook said she “enjoys riding around in cars a lot”, which is probably how she met her first and only husband, Paul. Together they raised two angelic children, P.J and Shannon. Over the next 20 years, Chris could be found at the local bowling centre, working behind the scenes, rolling a few balls down the lane and running the YBC. She met many people there, including some that became lifelong friends. She was also a member of the Egremont Optimist Club, climbing her way up to President one year. She absolutely loved the fireworks night every Canada Day and could be seen with her donation bucket, flashlight and her smile. As the years went by, and her kids left home, Chris wondered what else was out there in the big, wide world and she moved to the big city (aka Guelph and then Kitchener/Waterloo) all by herself. There she went back to school and got her degree for Executive Assistant. We were all so proud of her for this accomplishment. She worked at the college she had graduated from and then a couple more places before she finally retired after her diagnosis. Chris was a larger than life woman, in stature and personality. Her children can still remember when she walked into their elementary school with her high heels and floor length, leopard print coat, and their fellow students exclaiming “Dude, that’s your mom?!?” At 5’11 (before she started to shrink) with added heels for extra height, she walked into a room, smiled, and everyone noticed. She carried herself with grace and dignity, shoulders back, head high and a quick step that she wouldn’t slow down for anyone, no matter how much shorter than her your little legs happened to be. She did everything in her time. In her way. Though there are no buildings named after her, no monuments erected in her honour, in the end she left her mark on all of us and we will never forget her. “Chrissy” will be deeply missed by her siblings, Fernie, Marg, Dorothy, Ian and Ruthie. Mom to Paul Junior and his wife, Sharon, and Shannon Moore and her husband, Kevin. She was Gramms, Namma C and Nanny to her grandchildren, Spencer, Meredith, Eileen and Megan and Gr. Gran to little Luna. She will be remembered by her first and only husband, Paul, whom she maintained a fond friendship with, even 16 years after they separated, as well as many cousins, nieces and nephews. She will never be forgotten by her many close and dear friends, too many to name, but you all know who you are. She loved you all. She was predeceased by her older brother, Dave. I’m sure they’re up to no good together on the other side. Cremation has taken place. A come and go Celebration of Chris’s life will be held at the Mount Forest Legion, 140 King Street West, Mount Forest on Saturday, February 29th from 1:00 – 4:00pm, with memories being shared at 2:00pm. Please come dressed in your happiest outfit. Chris loved bright and cheery colours. In lieu of flowers, donations to Ramoth House in Mt. Forest, the Canadian Cancer Society or the Egremont Optimist Club would be greatly appreciated, or buy yourself some of Chris’s favourite flowers – red carnations and yellow roses – sit them on your table and remember her in your own way. Arrangements entrusted to the England Funeral Home, Mount Forest.