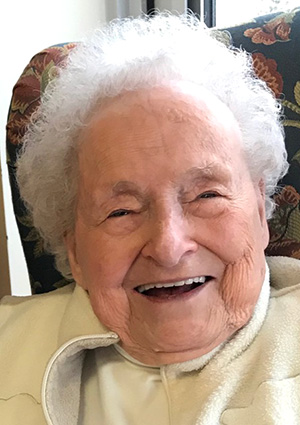 On May 9, 1924, the Galt, Ontario doctor, who delivered Mary Isobel Walker, told the wee tyke’s parents she likely wouldn’t live through the night. That was 96 years and 88 days ago – give or take a few either way for leap years – and Mary, Mary Quite Contrary has stubbornly refused to do what she’s been told ever since. And even after emergency surgery, performed July 2, to ease severe pain from a shattered hip, she kept her family, her friends and her exemplary team of Wellington Terrace caregivers, headed by her beloved Doctor John Stickney, in suspense for nearly five weeks. On August 6, just in time for supper, she decided she was ready to go home, where her husband, Bob, has been waiting since 2008 (he’s been used to waiting for her). By now, she will have been reunited with her Mom and Dad, her sister, Bunny, her son-in-law, Joe Pearson, a huge extended family and many dear friends. And in God’s good time, she will welcome her three children, Linda, Bob and Jim, her daughter-in-law, Jane, who held her hand and spoke words of love to her as she left, her grandkids Matthew (Jessica), Tim (Sheri), Stacey (Andrew), Heather (Luke), Andrew and Ally, and her great grandkids Erin, Jack, Brayden, Macy, Grace, Cameron, Rachel, William and Corinne. Every one of us who was blessed to have had this wonderful little imp in our lives is grateful. And though we’re feeling the sting of separation, we know she’s where she has always wanted to go. We just hope somebody had the foresight to warn Saint Peter. A private memorial service has taken place. Donations in Mary’s memory may be made to a charity of your choice.