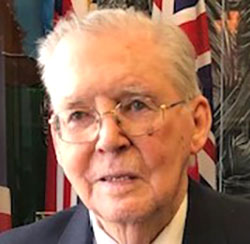 It is with sadness that we announce the passing of John Thomas Collins on February 18th, 2020 at Parkwood Veterans Long Term Care in London Ontario at the ripe old age of 96. John was born in Thessalon, Ontario and was proud of his Irish heritage. He joined the workforce in his hometown at the young age of 16 as a cutter, then as a welder at Inco in Sudbury, where he enlisted in the Air Force at age 19. He was a Leading Aircraftman and served in England, loading bombs onto airplanes including the Lancaster, until the end of the war. Returning to Canada, he found his way to Mattice, and then Kapuskasing Ontario. He initially worked as a scaler in the bush for Spruce Falls P&P Company where he spent the next 43 years until his retirement as a Superintendent of Woodland Operations. He met his wife Margaret Grant in Mattice while she was teaching in a one room schoolhouse and they married in 1947. They raised their 4 children in Kapuskasing where they called home even after moving to Fergus in 1997, then to Guelph, and then living their final days in London. John has outlived his siblings and most of his friends. John was predeceased by his wife Margaret “Marg” Collins (nee Grant); daughter Nancy Buhr (Ken); parents James Patrick “Paddy” Collins and Mary Agnes Skeffington; brother Jimmy age 15; sisters Margaret Collins, Katherine “Kitty” Bromley, and Ellen “Nell” White. John/Grandpa will be greatly missed by his surviving children, Patrick Collins (Trudy), Peggy Anne Endean (Kenn), and John Collins Jr. (Maureen); grandchildren “the Cousins” including Cora Endean (Bill Turnbull), Andrea Buhr Wilson (Andrew), Lindsay, Ashley, Jonathon, and Jamie Collins; great grandchildren Finley and Ewan Wilson. Both he and wife Margaret enjoyed travelling and have been to all parts of Canada, east and west, California, Hawaii, Scotland, and many winters in Florida. John was an avid hockey player in his early years and played for the Canadian Air Force hockey team while in the service. A later sports passion was golf and he was a member of the Kapuskasing Golf Club. He played the sport wherever he travelled including Florida where he shot his age at 87. John was a fisherman and hunter and loved nature and being outdoors. He especially loved trees but also birds and horses as well as Canadian history and had many books on all these subjects. He was an ardent gardener, and especially loved his tomato plants. His hands-on skill of carpentry led to many wood projects for his family. He could also take apart and fix any appliance, or at least try. John was proud of his Air Force service and was a long-time member of the Kapuskasing Branch 85 of the Canadian Legion. Family and friends may visit on Saturday, May 23, 2020 from 2:00 to 2:30pm at the Graham A. Giddy Funeral Home, 280 St. David St. South, Fergus, followed by a Celebration of Life in the funeral home chapel starting at 2:30pm. Memorial donations may be made to the Terry Fox Run or The Canadian Cancer Society. Arrangements are entrusted with the Graham A. Giddy Funeral Home.