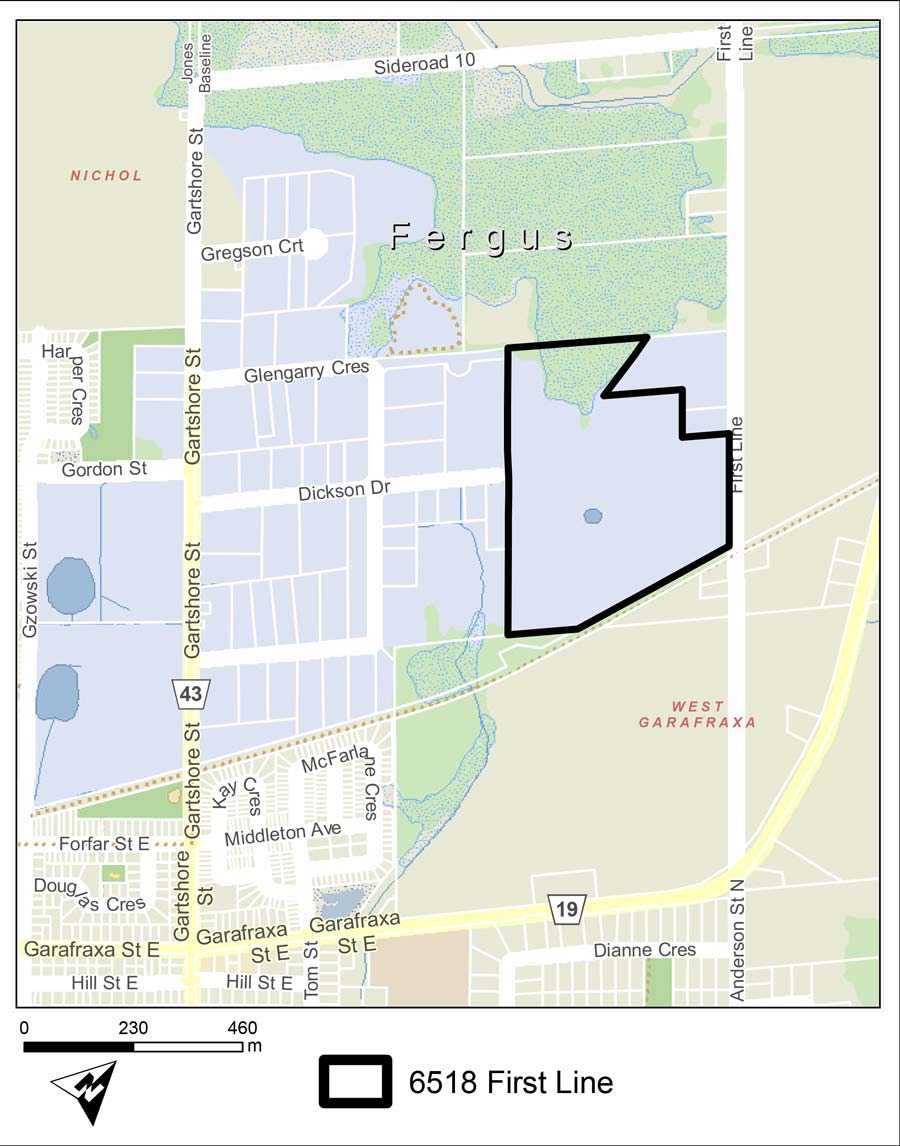 A strategy for developing the North Fergus business park on Dickson Drive will come to council July 26.

FERGUS – Demand is high for lots in the North Fergus Business Park and they are expected to sell out within two years of going on the market.

The Centre Wellington economic development committee learned that the business park in north Fergus currently under development, will have many advantages over business parks in neighbouring communities, with its access to Highway 6, lower land costs, its ability to accommodate requests for one to five acre lots with 10,000 to 50,000 square-foot buildings – currently in high demand – and access to the Elora-Cataract trail, which is a nice perk for employees.

“The Centre Wellington Business Park is positioned to capture a significant portion of this large, growing, and pent-up demand by supplying appropriately sized and competitively priced serviced business park land, which will result in the completion of sales of available lands within two years of availability,” reads a report from McSweeney and Associates.

The township purchased 58 acres of land on Dickson Drive from the end of the road to First Line that  includes 42 acres of developable land. The purchase was finalized in January 2020 for $2.32 million.

McSweeney’s report makes recommendations on the types of businesses that would be appropriate and not appropriate, servicing, phasing, and marketing strategies to get the project off the ground.

Managing director of planning and development Brett Salmon presented the report and said market analysis indicates business parks in Waterloo and Guelph are filling up and rising land costs are putting them out of reach for businesses hoping to expand.

And smaller communities in Wellington County “have a very limited supply of serviced land,” Salmon said. “We believe we won’t have difficulty selling the land. McSweeney thinks we will sell out in a couple of years.”

Salmon said it would be relatively easy to install services and the report recommends extending Dickson Drive to First Line in the first phase of development.

The report projects the business park will bring 11,000 new jobs to the area.

Perhaps the most contentious recommendation in the report is to allow the CAO to negotiate land sales without the express approval of council. Council would have to approve a land sales policy that the CAO would follow, but would not be involved in individual purchase agreements.

“This is the obstacle in the document,” said committee member Janet Harrop, adding she’s concerned it could be the sticking point that some councillors would oppose.

“We need to make the point that this is not unique to Centre Wellington – it’s about timely decision-making. That point needs to be impressed to council.”

“Council will always have overarching authority,” agreed committee member Bob Cameron. “We could update council three or four times a year. But to be able to close a deal – that’s what we want to do.”

Committee member Jim Gibbons has been lobbying for a business park in Centre Wellington for some 45 years and put forward a motion that the committee endorse the report and recommend that council approves the report as well.

“It’s going to be a big benefit to Centre Wellington,” he said as the committee unanimously approved the report.

“It was hard to get council to buy this land,” Cameron added. “We really need to drive it home.”

“We are on the cusp of doing something that’s really special and really right,” said Mayor Kelly Linton.

Council will consider the McSweeney report and the committee’s recommendation at the July 26 meeting.