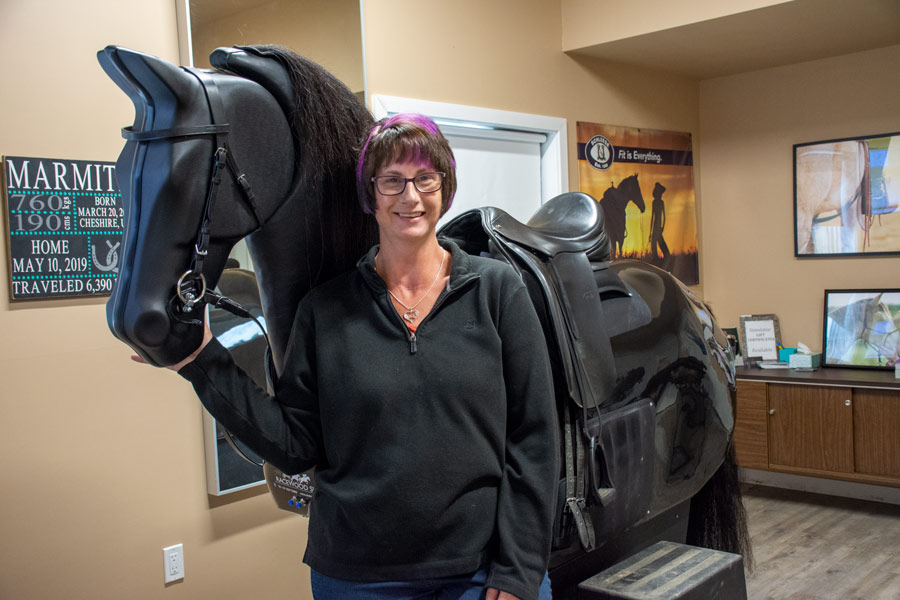 PALMERSTON – A new business in Wellington County allows horseback riders to focus on their skills and biomechanics without having to juggle and manage a live horse.

Black Horse Biomechanics Riding Simulator opened on May 20 and owner Shannon South said she’s had no lack of clientele.

The simulator is named Marmite, Mighty for short, and apart from the mechanical sounds, lack of horse smell and consistent gait, he moves and feels very much like a real horse (not at all like a mechanical bull or children’s horses at the grocery store).

“He doesn’t spook, he doesn’t bolt … he just does steady things all the time,” South explained.

During sessions Mighty reads and analyzes a rider’s biomechanics – how they’re sitting in the saddle, how they’re holding the reins and even how their legs lay on the horse’s body.

“As human beings we often don’t know what we’re actually doing in our own bodies,” said South, who is also a riding instructor. “So a rider will come to me and … say ‘my balance is really terrible,’ well we can actually see what their balance is.”

She said for most of the time a rider is in the saddle, they’re paying attention to what the horse is doing and where they’re going.

“So this really allows us to just concentrate on … ourselves without any distraction from anything else,” South said. “And to be able to ride certain gaits … for as long as we want because he never gets tired and the gait is always the same.”

Mighty can move a rider through life-like gaits including two speeds of walk, two speeds of trot and left and right lead canter, along with a host of advanced dressage movements.

The simulator is named Marmite, Mighty for short, and apart from the mechanical sounds, lack of horse smell and consistent gait, he moves and feels very much like a real horse (not at all like a mechanical bull or children’s horses at the grocery store).

With four sensors under his saddle, the simulator can measure where the rider is sitting in the saddle and South can make adjustments to help the rider achieve a more balanced seat.

“We want to move with the motion of the horse because if we were just frozen and we didn’t move anywhere [the horse] would be like ‘what’s going on,’” she said.

“So our seat needs to move with the motion on the horse but what we’re looking for is a balance.”

South said horses can feel if the rider is off-centre and while some horses don’t care, other horses are very sensitive.

“They get very upset and then it shows up as a behavioural issue, which people are then trying to fix, not realizing that it has to do with just how they’re sitting in that saddle,” she said.

As an instructor, South said Mighty makes it easy to explain and show riders how they need to adjust what they’re doing.

“I never run around chasing my horses in the arena,” South said. “So as Mighty canters along I can be standing here and helping a rider using the mirrors and find certain places in your body and it’s just invaluable.”

South said sessions with Mighty are appropriate for all ages and for recreational riders to competitive riders.

“Most riders want to be better for the horse,” she said. “They want to be the best they can be for their horse.”

Mighty can help them get there in a safe and informative way. 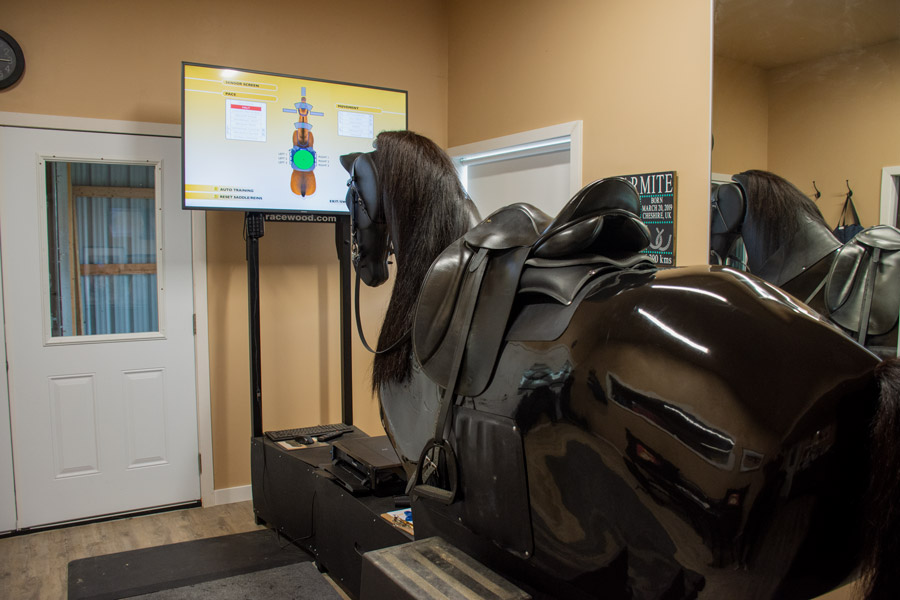 During sessions Mighty reads and analyzes a rider’s biomechanics – how they’re sitting in the saddle, how they’re holding the reins and even how their legs lay on the horse’s body.

In addition to giving immediate feedback, at the end of a session the rider will get a print out of their analytics that they can take back to their coach or use for their own reference to help them when they ride a live horse.

South said Mighty is also a great resource for riders who are overcoming confidence issues, whether it’s due to an accident, years out of the saddle, hip or knee replacements, concussions or a whole host of other life circumstances.

Mighty allows those riders to feel the horse motion again, get back in the saddle, check their balance and even work on steering.

“It’s really good for rehabilitation for physical purposes or for the mental side as well,” South said.

Mighty is available year round. Whereas the Ontario outdoor riding season is pretty much from May to October, using Mighty allows riders to work on their fitness and ability in the off-season too.

“Heated in the winter, cool in the summer and we can just ride all year long in comfort,” South explained.

Mighty is a 2019 RDA Dressage Model manufactured by Racewood Simulators and is one of two simulators in Ontario.