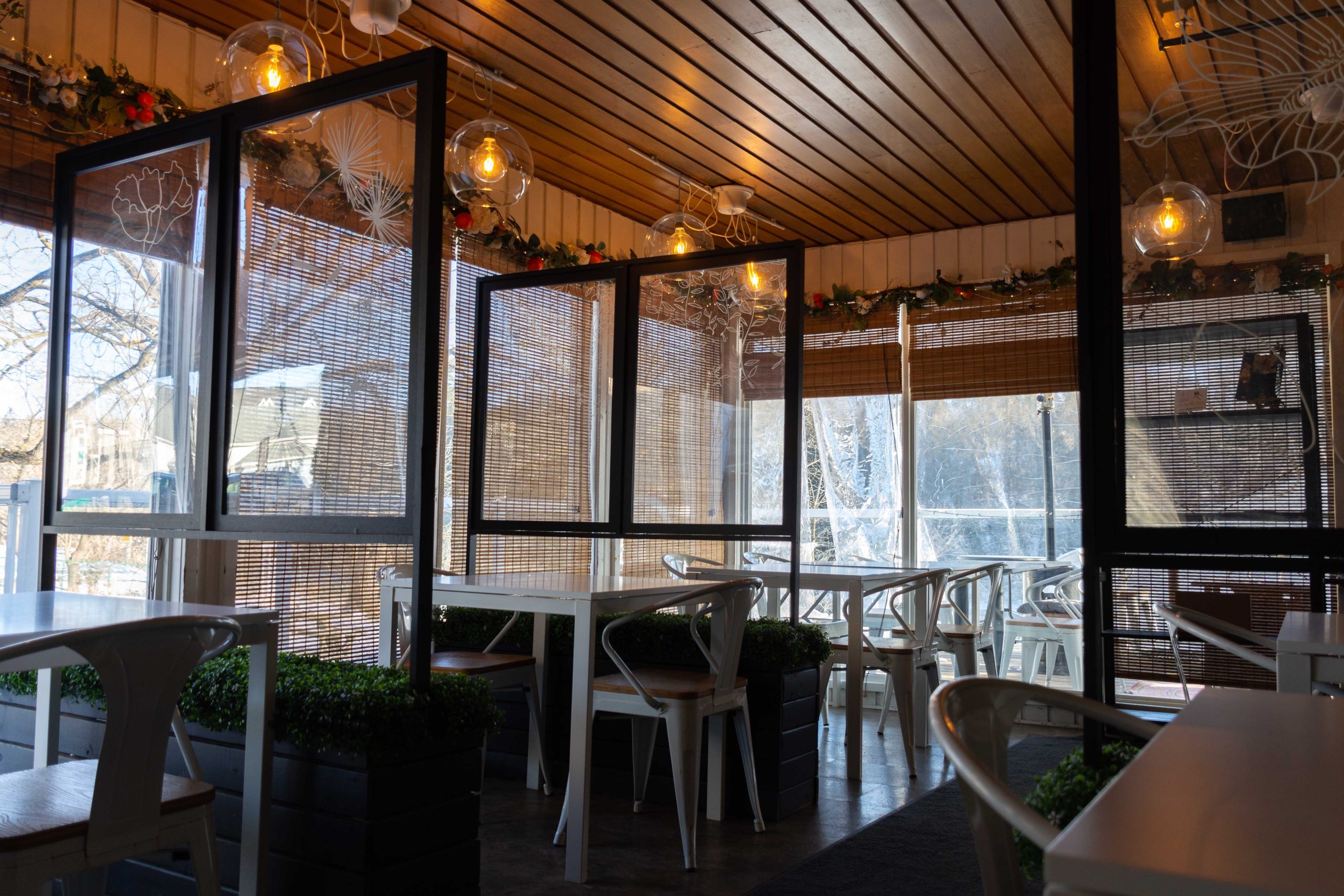 Local restaurant owner-operators who opened their doors between 2019 and 2020 are struggling with the effects of pandemic restrictions and are trying to hold on for better days. In this photo, the indoor dining room of La Fontana in Elora sits empty under an indoor dining ban implemented by the provincial government on Jan. 3 and forecasted to last until at least Jan. 26. (Photo by Jordan Snobelen)

“It’s much cheaper to stay closed these days,” he said in an interview with the Advertiser following the latest ban on indoor dining that was handed down onto restaurateurs from the province on Jan. 3 and scheduled to last at least 21 days.

But the space rests empty and snow-covered.

Despite being permitted to allow outdoor dining and takeout, heaters connected to propane tanks sit cold and idle. The doors of a dining tent flapping in the sub-zero wind are the only sound.

The outdoor bustle of life from past summers is nowhere to be found, and the bistro’s small indoor dining space is darkened and quiet.

“I cannot afford to be open for takeout or anything else because I don’t think there’s going to be enough business,” Fontana said of the decision to forego an outdoor dining or takeout model until indoor dining resumes.

“We’re not in Florida,” he remarked of the timing. 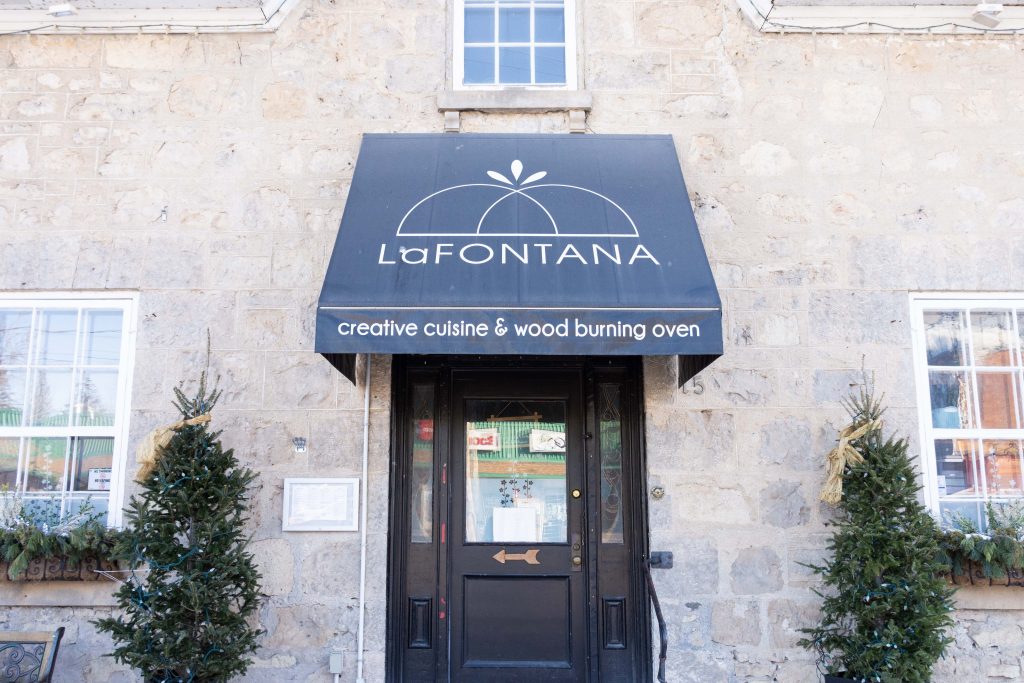 The facade of La Fontana on Mill Street in Elora. (Photo by Jordan Snobelen)

La Fontana fired up its wood-fired oven in March of 2019, and after celebrating the location’s first anniversary the following year, Ontarians experienced the first of what would become a series of repeating lockdowns and restrictions imposed by government officials in an attempt to thwart the spread of COVID-19.

“I think I’ve had the restaurant open 18 months in three years of owning it,” Fontana said.

Sales were healthy in the summer of 2020. With one of the largest outdoor spaces of Elroa’s downtown restaurants, there was plenty of space to seat customers with proper distancing. And yet, Fontana says, business wasn’t in “anyway profitable.”

This past year? Even worse, he said, describing it as a “loss” and “terrible.”

“It’s exponentially harder on small independent businesses. They don’t have any backing … they have to, in many cases, do it all themselves,” Rilett said, adding, many are having to go into personal debt or tap retirement savings.

“It’s been their life’s work in many cases, and they don’t want to easily give up on it.”

Government subsidies aimed at bolstering businesses to weather the onslaught of viral waves was sufficient in the first year of the pandemic, Fontana said, but last year he found himself ineligible for full benefits.

The reason: past summer sales were “too high,” he said. 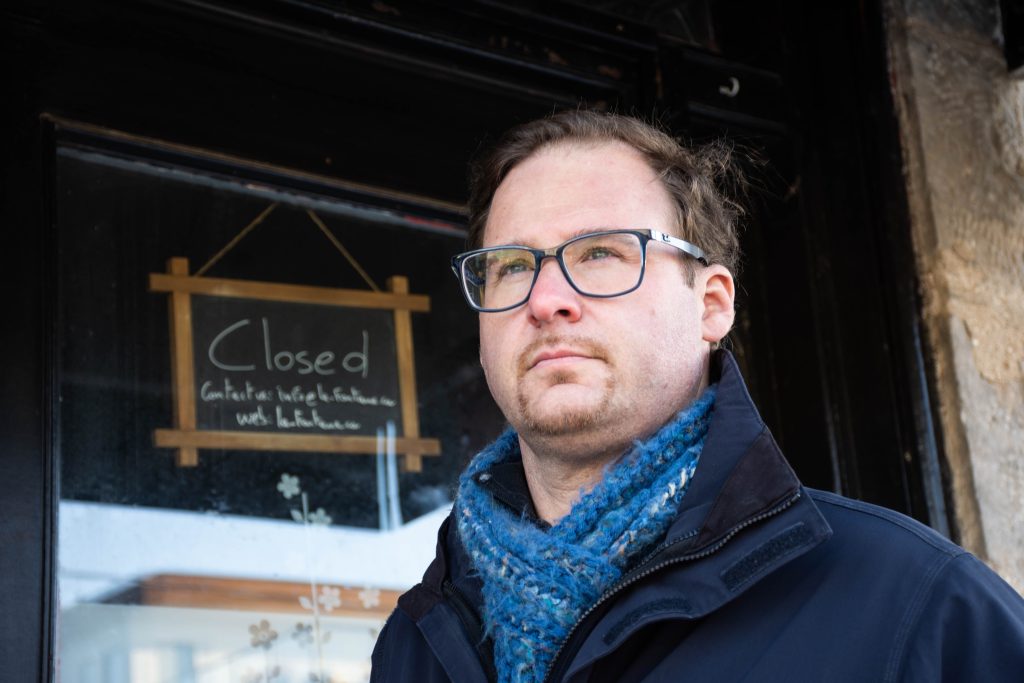 Denis Fontana, owner-operator of La Fontana, stands for a photo in front of his Elora restaurant. The independent business owner made the decision to temporarily close his business during a provincial ban on indoor dining. (Photo by Jordan Snobelen)

Last year, with staff halved, the doors remained open during springtime restrictions allowing for takeout, but the bistro operated “at a loss the whole time” without enough business to make it worthwhile.

Following the warmer months, business was once again frozen by winter and is likely to stay that way during the step back to a modified step two of the provincial government’s Roadmap to Reopen plan, without any guarantee of when restrictions will end.

The province will assess current restrictions with the potential for an extension beyond a Jan. 26 expiry date, according to the province’s top doctor Kieran Moore.

Fontana said although he doesn’t doubt the prevalence and severity of COVID-19, he can’t seem to reconcile why schools can open and other businesses operate while battered restaurants, already in survival mode, have to suffer another hit with a ban on indoor dining.

Like Fontana’s patience with government restrictions, money has run out and he admitted going into more debt than he’d like in the hope people will soon be able to claim a table at the bistro.

His 10 staff, including a chef, are now laid off and receiving either employment insurance or $300 per week from the Canada Worker Lockdown Benefit, until he can call them back to work.

When that inevitably happens, Fontana said it will be like “opening a new business again … starting from scratch” – at least financially – for the third time since opening.

“I hope for a better summer,” he remarked. “I hope there is not going to be anymore lockdowns – it sucks.” 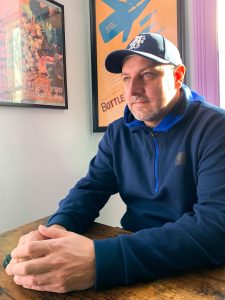 Craig Hyatt, who owns and operates Tapavino Fergus with his wife Robynne Funk, is seen inside the couple’s St. Andrews Street restaurant location in Fergus. (Photo by Jordan Snobelen)

At Tapavino Fergus, owner-operators Craig Hyatt and Robynne Funk had been planning to purchase a house in Fergus but instead have parted ways with their down payment to keep their recently opened wine and tapas restaurant alive.

Hyatt and Funk ran a tapas bar in Spain for three years before settling on the St. Andrews Street location in downtown Fergus just as COVID-19 was beginning to rear its head.

After putting tens-of-thousands of dollars into renovating the space, their liquor license arrived in March of 2020 — right as the first round of lockdowns struck.

The restaurant finally opened its doors later that year, serving small, savoury dishes with wine in the intimate setting.

“We couldn’t have asked to come to a better place than this,” Hyatt said of Fergus.

Despite the positive reception, the off-and-on closures throughout the pandemic are taking a toll on the couple.

The restaurant doesn’t have a patio and the small dishes don’t lend well to take-out meals, leaving the pair reliant on a 14-person capacity for indoor dining.

“We just haven’t been here long enough and I’m not prepared to put the first impression that some people get of us on takeout food,” Hyatt explained.

Tapavino’s customers are loyal, doing what they can in the meantime to buy gift cards and send messages of support and encouragement.

After emptying their savings and taking loans from “amazing family” that have stepped up to help, Hyatt is thinking about cutting his losses. 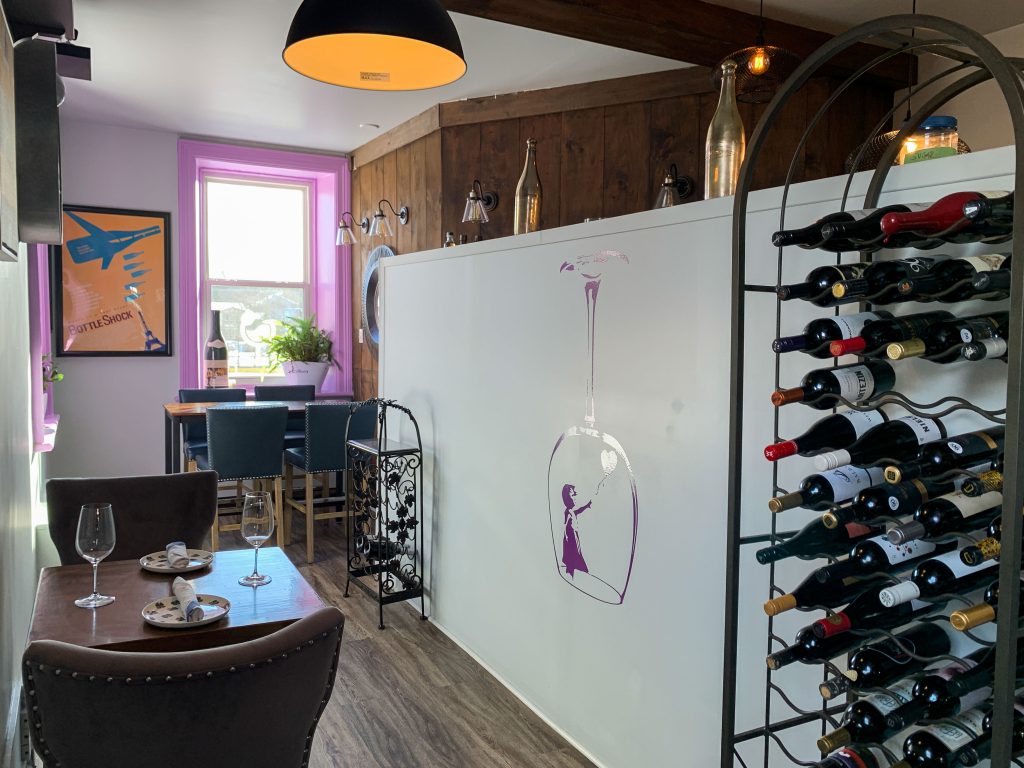 The intimate indoor setting of Tapavino Fergus, a wine and tapas restaurant, sits empty during a provincial ban on indoor dining. (Photo by Jordan Snobelen)

“We’ve done all of this and we’re still getting closed down,” he remarked in frustration, saying he feels picked on.

How could he not, he said, watching people walk into other businesses.

Hyatt is confident restrictions won’t come to an end next week — so confident he’s not even going to bother preparing.

“I don’t trust them, simple as that,” he said of provincial government and public health officials. “I just feel all the moves they’ve been making are just spur-of-the-moment.”

Like Fontana, Hyatt is trying to stay optimistic and keep his mind’s eye on a lockdown-free future with flowing wine and a full dining room.