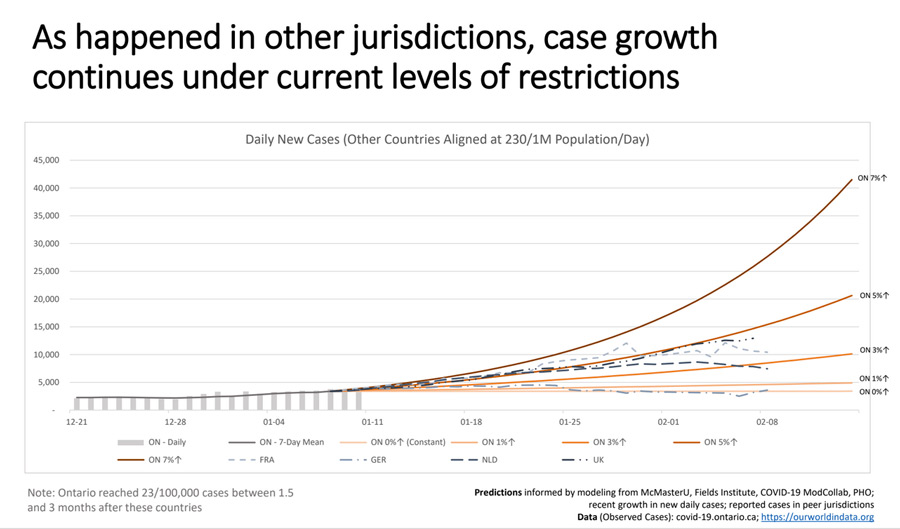 That was the message relayed by Wellington-Dufferin-Guelph Public Health (WDGPH) spokesperson Danny Williamson on Jan. 12.

“People should be very concerned and each of us really need to think about the actions we’re taking … to help control the spread,” he told the Advertiser.

Williamson was reacting to provincial projections released on Jan. 12 that indicate Ontario’s daily COVID-19 death rate could double –  from 50 deaths to about 100 – by the end of February and the province’s health care system could be overwhelmed if current trends continue.

He explained officials are aware that many Ontarians, including residents in the WDGPH region, continue to gather in violation of the current province-wide lockdown.

Williamson said “COVID fatigue” and news of the vaccine arrival may be contributing to the cavalier attitude of some residents.

But he cautioned that widespread vaccine rollout will not come quickly enough to help with the current spike in cases and the corresponding impact on the health care system.

It will be the spring or summer before the general public will be vaccinated, he predicted.

“We need immediate changes in all our behaviour … people have to do it,” said Williamson.

People may be tired of hearing it, but public health officials are again reminding people to stay home, distance when that’s not possible, wear masks and practice good hand hygiene.

“They really do work,” Williamson said of the public health measures. “And people need to take this seriously.”

Dr. Adalsteinn Brown told reporters in Toronto on Tuesday that he was going to “talk bluntly” about the current COVID-19 situation in Ontario.

Brown, co-chair of the province’s COVID-19 Science Advisory Table, said that at the current rate of case growth, doctors will have hard choices to make when it comes to treating patients.

“(They will have) to confront choices no doctor ever wants to make, and no family ever wants to hear. There will be choices about who will get the care they need and who will not,” said Brown.

“We’re at a very dangerous point.”

For context, Brown said that about one quarter of the province’s hospitals have no ICU capacity left, and another quarter have “only one to two beds” available.

The hospitals with no or very limited ICU capacity are spread out throughout the province, he added.

Brown added this virus is impacting everyone, not just those who have contracted it.

“It affects all patients needing intensive care, whether it’s patients who had a heart attack, who’ve been in a motor vehicle accident or who have COVID-19,” he said.

Dr. Barbara Yaffe, the province’s associate chief medical officer of health, said at the briefing that survey results and current trends indicate the “lockdown” measures implemented in late December were “not enough.”

“We are in a serious situation, so we need more serious measures put in place,” she said. 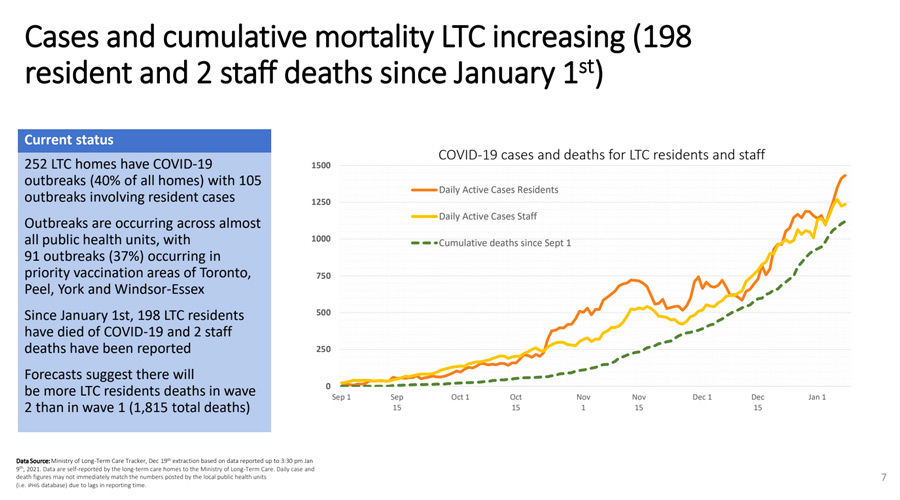 Brown said he fears that if Ontarians don’t significantly reduce their contact with others during the pandemic, the province’s health system will become overwhelmed and deaths will exceed first-wave totals before vaccines have time to take effect.

“The impact on our health system is already greater today than we have ever seen in Ontario’s history,” he said.

Brown warned that the new variant of COVID-19, first identified in the United Kingdom, is more easily transmissible and could begin to rapidly spread in the province.

If that does occur, it will “considerably extend” the time it will take for case counts to drop significantly.

Eight more people infected with the new variant of the coronavirus in Ontario were identified on Jan. 11. A total of 14 instances of the variant have been identified, but “it’s very likely that we have more that we’re not aware of,” said Yaffe.

Of those cases, three currently have no known links to travel, suggesting community spread could already be happening.