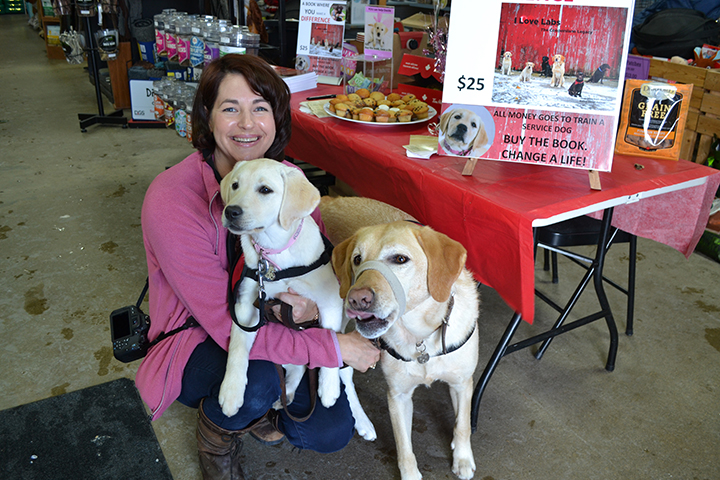 At your service – Jacqueline Gori poses with her service dog, Samson, and four-month-old service dog in training, Dazzle. Gori, who says Samson saved her life multiple times, launched her book about service dogs, I Love Labs: The Cooperslane Legacy, in Elora on Feb. 29.
Photo by Joanne Shuttleworth

“I wouldn’t be alive without him.”

Gori was in Dreamland Pet and Equine in Elora on Feb. 29 with her friend Nancy Silcox to launch their book I Love Labs: The Cooperslane Legacy.

Cooperslane Kennels, in Arthur, breeds Labrador retrievers and has donated hundreds of dogs to organizations that train them to become service dogs.

Gori said she went to the kennel to let them know how much Samson has impacted her life and learned there are hundreds of families and individuals with similar tales to tell.

So she tracked down 50 of them, and the book tells their stories. Funny, sad, moving – these people would be lost without their service dogs.

“Right now, the three-year-old girl in me is afraid I’ll be beaten up,” Gori said, explaining how a dog with specialized training can help her.

“Samson has knocked knives from my hands, taken pills from me. Because of Samson I’m in a much better position than I was. Now he alerts me to my emotions before I self harm.”

Gori, an artist who lives in Breslau, illustrated the book and Silcox, a freelance writer in New Hamburg, wrote the stories from questionnaires filled out by the participating families.

The book launched in five locations simultaneously – Cambridge, Kitchener, Oakville, Whitby and Elora – and many of the families and their service dogs attended.

It’s important to understand the difference between service dogs, emotional support dogs and therapy dogs, Gori said, because not every dog is allowed everywhere and saying your dog is a service dog doesn’t make it so.

Indeed, Gori sits on a task force that’s lobbying for legislation that would clearly define the designations and the entitlements.

“That would stamp out the fakes,” she said.

The owner of a service dog must have a disability and a letter from a doctor stating they need the dog. The dog itself has had at least two years of specialized training and can perform at least three tasks that the owner can’t, in order to be certified.

Service dogs are allowed to go anywhere in public with their owner, even places that normally don’t allow dogs, like restaurants, stores, buses and planes.

Emotional support dogs have had special training, but they mainly provide comfort. The owner is allowed to have the dog in their home, even if no animals are otherwise allowed – in an apartment or condo, for example. But they are not entitled to go everywhere in public.

Therapy dogs are well-behaved animals that go into nursing homes, rehab centres and other settings to visit with patients or residents. These visits can prompt memories for people with Alzheimer’s and offer comfort and community for those who enjoy the visits. St. John Ambulance is an example of an organization that runs such programs.

Tagging along for the book launch was Dazzle, a four-month-old lab in training to become a service dog.

“Dazzle already knows deep pressure therapy,” Gori said, as Dazzle put paws on her legs and head in her lap. “This is very grounding for people with PTSD or autism. Some dogs can learn to turn on lights when their owner is having nightmares or open a door for someone having a panic attack.

“Dazzle will probably go to someone with autism.”

The cost of a service dog is $15,000 to $25,000. Proceeds from the sale of the book will go directly toward Dazzle’s training, so the client, whoever that turns out to be, will have no costs.

I Love Labs: The Cooperslane Legacy, costs $25 and is available in Elora at Dreamland Pet.

It can also be ordered online at partnerswithpaws.ca.