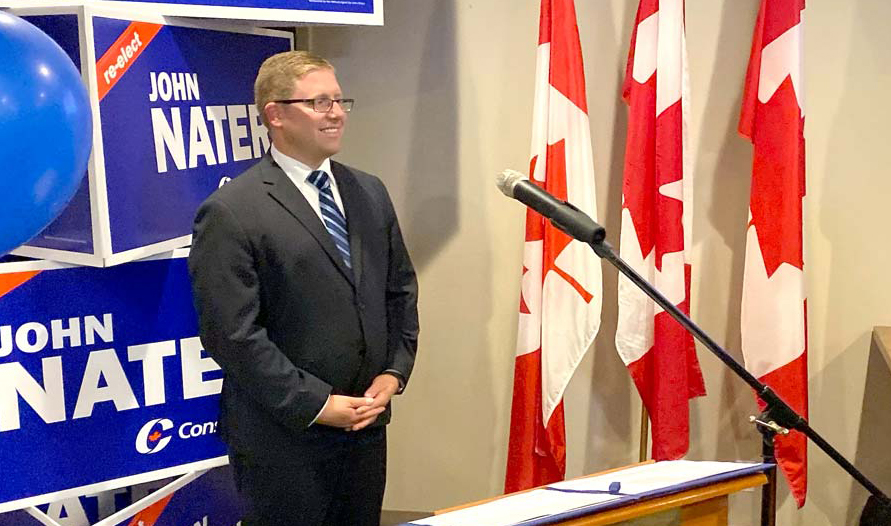 PERTH-WELLINGTON – Incumbent Conservative MP John Nater handily won this riding in the Oct. 21 election, taking 46.5 per cent of the vote.

The Liberals captured 157 seats, compared to 121 for the Conservatives, 32 for the Bloc Quebecois, 24 for the New Democrats and three for the Green Party. One independent, former Liberal cabinet minster Jody Wilson-Raybould, earned a seat in the new Parliament.

“Locally I’m quite honoured and humbled to have been re-elected with an increased margin of the vote percentage,” said Nater in an Oct. 22 telephone interview.

“I hope it’s a reflection on some of the hard work I’ve put in over the last four years.

“I’ve tried to be as accessible as possible, to attend as many community events as possible, to listen to people’s concerns and try my best to take action when I could.”

Nater said the minority government result is “reflective of the viewpoint” of Canadians.

“The voters are always right and certainly they made a decision and now it’s incumbent on us as political parties and politicians to try to make this work,” he said.

Nater stated he has always tried to work with the governing Liberals to achieve the best outcomes for constituents.

“Going forward in a minority context, it’s going to be even more important that we work cooperatively, that we try to find common ground on the issues that matter,” he said.

Rural infrastructure, rural broadband and affordability issues will be key priorities for the upcoming term, the MP noted.

“I was struck by how many people were open to a different conversation about climate change and I saw first hand the effects of precarious housing,” said Krauter.

He explained he met people struggling to make rent payments and living in less-than-ideal conditions as a result of earning minimum wage or struggling with medical costs.

“It really illustrated the message the NDP was bringing to the doorstep,” he said, adding it made him more determined to fight during the campaign.

Krauter added voters he met were engaged in the election, even if they may not have been optimistic of the outcome.

On the outcome and where it will take Canada, Krauter said, “I hope this is the minority government remembered for giving us universal pharmacare because there are people in this riding who desperately need it.”

In terms of broader issues, Krauter hopes “all the leaders are committed to finding some common ground and mutual areas of interest so that our economy becomes less precarious and we are not such a divided country.”

He added, “The climate is the defining issue of our time. We can’t wait to phase out fossil fuels and be leaders in renewable energy.”

Green Party candidate Collan Simmons believes a minority parliament will force the Liberal government to accommodate the priorities of the other parties.

“We ran a strong campaign with the resources we had available,” Simmons stated.

Simmons added, “The Greens and the NDP will make sure that their priorities are reflected in the policy that is passed. Climate change will need to be addressed with measures that will actually decreases our emissions.”

He concluded, “I would like to thank all our volunteers and supporters for their hard work.”

The Advertiser was unable to reach Liberal candidate Pirie Mitchell by deadline on Oct. 22.

– With files from Mike Robinson and Chris Daponte