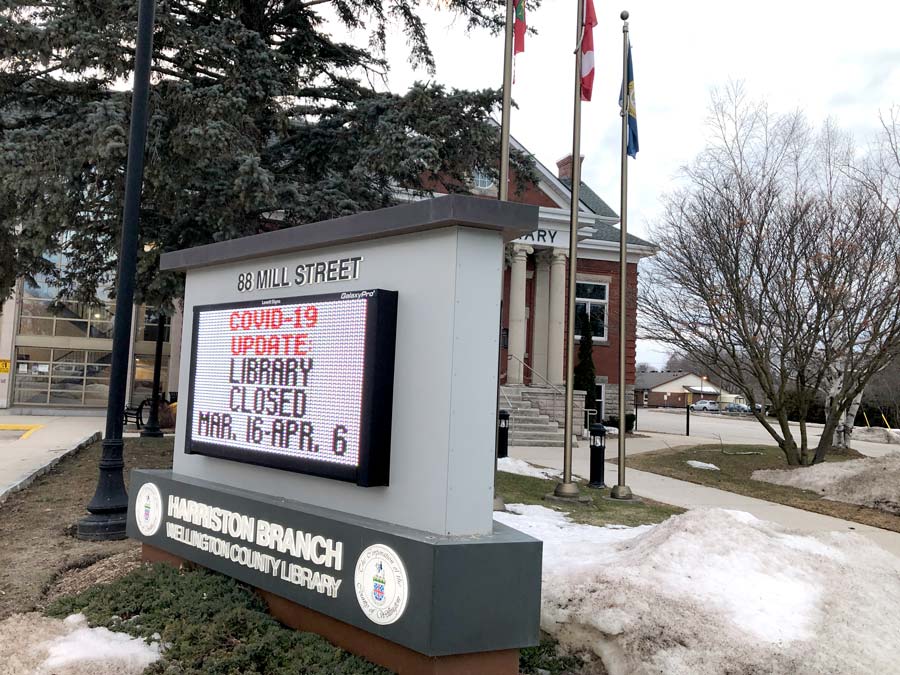 Shut down - Public facilities, including libraries and municipal offices have been closed to the public in response to the global COVID-19 pandemic.
Photo by Patrick Raftis

WELLINGTON COUNTY – Municipal facilities and activities were shut down around the region in response to the ongoing global outbreak of COVID-19, even before Ontario Premier Doug Ford declared a province-wide state of emergency at 8:30am on March 17.

The Township of Mapleton and the Town of Minto closed all municipal recreational and cultural facilities on Friday.

Both municipalities said closures would remain in effect until March 20, but on March 16 both extended the closures to April 6 and announced other measures, including closing the local municipal offices to the public.

Wellington North announced on Friday that public skating would be cancelled and by Sunday had issued a statement asking residents to use the internet or telephone whenever possible and eliminate non-essential visits to municipal facilities.

By March 16 at noon, all municipal facilities were closed to the public, including the Mount Forest and District Sports Complex, Arthur and Area Community Centre, Arthur and Mount Forest fire halls, Damascus Hall, the Arthur Seniors Hall and the Kenilworth municipal office.

Ford’s March 17 declaration means that bars and restaurants across the province the have been ordered closed until at least March 31, except to provide take out or delivery of food.

The Ontario declaration came on the heels of a decision by the federal government the previous day to essentially close Canada’s borders to foreign nationals other than American citizens, with some exceptions.

In a March 15 statement on COVID-19, Wellington North Mayor Andy Lennox noted taxes can be paid through banks, items like burn permits and dog tags can be obtained on the township website, and other services, such as those offered by the building and recreation departments, can be booked by phone.

Also over the weekend, the County of Wellington announced the closure of all libraries and the county museum until April 6.

Two days earlier, on March 13, the county announced those buildings would remain open and programming would proceed as planned.

Then, on March 14 the county decided to cancel March Break programming at the museum as well as all programs at libraries across the county.