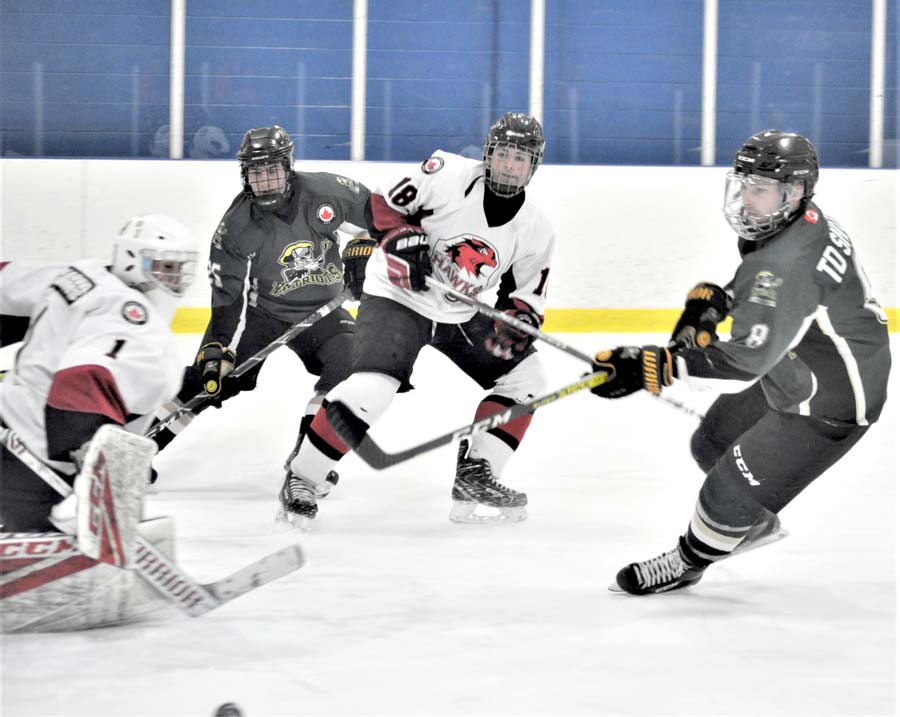 Take your best shot - Blair Butchart, left, of the Mount Forest Patriots takes a shot at the Walkerton goal during their game on Jan. 24 in Walkerton. Butchart had two assists in the game, which Mount Forest won 5-1.
Photo by Pauline Kerr

The Patriots kept the Hawks off the scoreboard in the first period while scoring twice on their opponents.

The Patriots’ first goal was by Ryley Cribbin, assisted by Blair Butchart and Hayden Coulter.

Next up was a goal by Jack Birkett, assisted by Michael Stefanelli and Colton Culbert.

The Hawks came up with a goal in the second by Ethan Hill on a power play, assisted by Carter Lewis and Kyle Langlois.

The Patriots came back with their own powerplay with a goal by Cribbin, assisted by Butchart and Troy Weber.

In the third, the Hawks earned another goal, this time by Tanner Hertel, assisted by Riley Keupfer and Nathan Hall.

The Patriots scored the final goal by Birkett on an empty net. He was assisted by Stefanelli and Weber to end the game 4-2.

On Jan. 24, the Patriots earned an away-game 5-1 win over the Walkerton Hawks.

Dawson Bolger of the Patriots earned the only goal of the first period, assisted by Coulter and Butchart.

Walkerton evened the score early in the second with a goal by Owen Torrie, assisted by Austin Brown and Jordan Borth, but the Patriots recaptured their lead shortly after with a powerplay goal by Coulter, assisted by Cribbin and Butchart.

The Patriots then solidified that lead with three unanswered goals in the third.

The Patriots’ game versus the Kincardine Bulldogs on Jan. 25 resulted in a 4-2 win.

Mount Forest was first on the board with a goal by Coulter, assisted by Cribbin and Philips.

Kincardine was up next with a goal by Logan Freiburger, assisted by Jerrid Fossold and Mike Fiegehen.

The Patriots returned with a goal by Stefanelli assisted by Philips and Birket to end the period 2-1.

In the second, Weber, assisted by Birkett, built the Patriots’ lead by another goal, followed by a Kincardine goal by Mike Fiegehenassisted by Jerrid Fossold.

Cribbin scored the Patriots’ only goal of the third period, assisted by Stefanelli and Butchart, ending the game 4-2 for the Patriots.

The Patriots dominated the first with goals by William Black assisted by Michael Anselmini and Nathan Bolger, followed by a second Patriots goal by Ryley Cribbin on a power play assisted by Blair Butchart and Jack Birkett.

The second period remained scoreless for both teams.

In the third, Cribbin scored early on assisted by  Blair Jenkins.

Flyers player Kaden Hoggarth, unassisted, earned the teams only goal of the game.

Upcoming games for the Patriots include a rematch against Goderich on Jan. 28.

On Jan. 31 the team will go up against Kincardine, followed by two weekend games against Mitchell – Feb. 1 and Feb. 2.