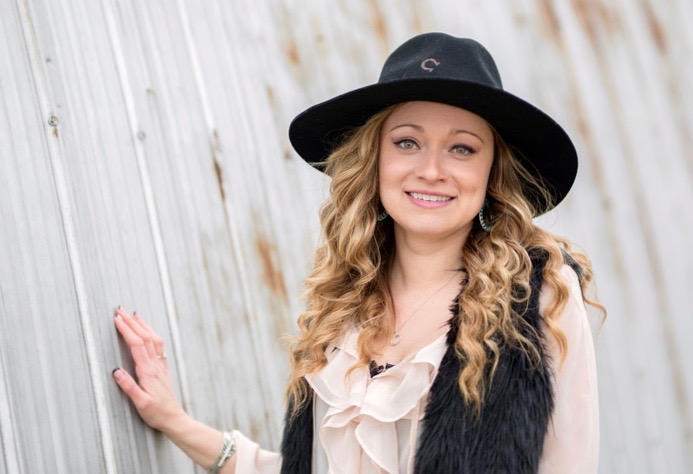 After months of delay due to the COVID-19 pandemic, Smith, 27, was finally able to hold her album release party on Aug. 22 in the Mount Forest arena parking lot.

The original release date was set for March 21.

The delay was hard, but she took it in stride, noting, “It’s not only me. The whole world is going through this.”

Smith, who grew up just north of Mount Forest, has been playing music her whole life and has musical roots on both sides of her family.

But it was her dad and her grandma that really got her into music.

“At every family function … we’d have the guitars out and my grandma would be on the piano and we’d be singing old country songs,” she said.

“I was kind of just raised in music.”

Her first guitar was one of her dad’s and eventually she got her own. She’s been making music every since.

“It’s just a good release and it feels good and everyone connects with music someway or somehow,” she said.

Now she writes her own music and has her own band, the Cara Smith Band.

Though she has recorded music in the past, live gigs always took up most of her time and recording was put on the back burner.

However, after she got married in 2017 and she and her husband began talking about starting a family, she knew she needed to record her music now.

In the spring of 2019 she got in touch with Brian Hewson of Escarpment Sound Studio in Belwood.

She began recording in July and by November the album was finished.

Smith wrote every song on her new country rock album and has a few shared writing credits with Al Selinger and her dad Willie Smith.

“One of the songs is about [my dad’s] best friend that died of cancer,” Smith said.

“And it actually played at his funeral and [he] actually got to hear it in the hospital before he passed away. My dad wrote the last verse.”

Those songs are what make Smith’s album special.

“I worked so hard on them and I was just there every part of the way, the whole time, when we were making it,” she said.

“It’s just, it’s your baby because you worked so hard on it.”

The rest of world finally got to hear those songs in August.

Smith knew she couldn’t have the same release party she had planned, so she adapted.

Instead of publicizing the outdoor, drive-in concert, Smith invited only those who had bought tickets for her March 21 release and subsequent May 23 postponed release attempt, which was sold out.

“I didn’t want random people showing up … especially with all the strict rules I had to follow,” she said.

Guests were screened at the gate and then they parked and listened to the concert from their own vehicle. Smith and her band played on a truck flatbed.

“It was weird, I didn’t really get to see any faces,” Smith said.

“There were some people that sat on the tailgates of their trucks but they were at the back so I didn’t really get to see their faces very well.

“But it was fun. It was great for the band to be able to play.”

She added, “It was nice … because a lot of people hadn’t gone anywhere or hadn’t done anything and this was just a safe thing for them to come out to for a Saturday night.”

And since Dusty Ole Backroad was released the response from the public has been good.

“Everyone’s got a different answer of what song on my album stands out to them and why it connected to them,” she said.

Since the pandemic began in March, Smith said she’s been writing a lot and working on new songs when she’s not working.

She works at Rockwood Terrace, a nursing home in Durham, in the programs department, and she runs the North Perth seniors program in Listowel.

“(The) nursing home has been crazy,” she said.

“Just lots of hours working, I haven’t really stopped working; been getting overtime, it’s been a little nuts and stressful.

And her Listowel job has been at a standstill since March.

“I hire bands and I run a dance … so I’ve just been calling my seniors, connecting with them,” she said.

With so many unknowns, Smith isn’t sure what’s next.

Dusty Ole Backroad is $20 and can be purchased by contacting Smith at carasmithcountry@gmail.com or visiting Arthur Cash and Carry.