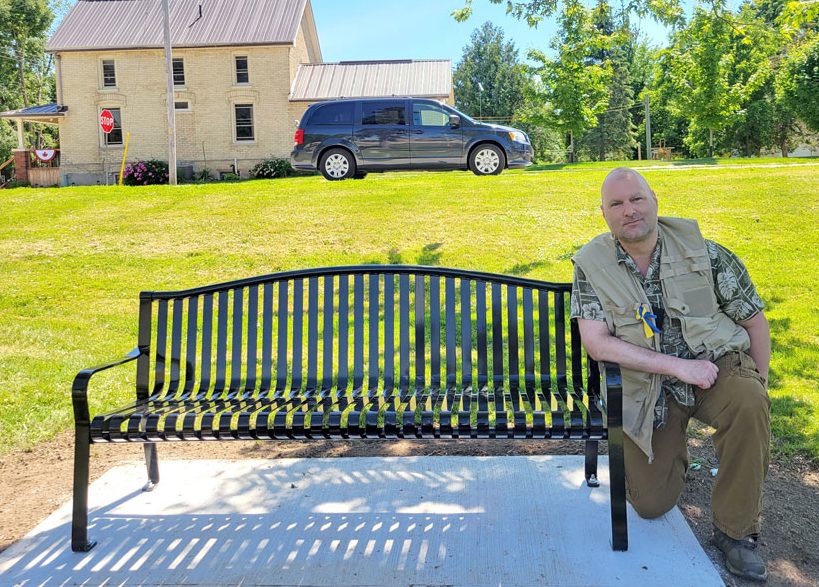 Walter Schultz with the commemorative bench installed in Cenotaph Park in Clifford in memory of his mother, Lou Stuebing. The bench is the first installed through the Town of Minto’s Commemorative Bench and Tree program. Submitted photo

CLIFFORD – When Mary Lou Stuebing of Clifford died on Nov. 20, 2021, her son Walter Schultz was by her side at the hospital in Palmerston.

Grateful for the hospital staff whose efforts allowed her to spend her last days as pain-free as possible, Schultz thoughts turned to how best to memorialize a woman whose life was a primer on optimism through adversity.

“She escaped an abusive husband to raise me on her own and a few years later broke her back,” while working at a job from which she was then let go, he explained.

In a memory from his early youth in Kitchener, Schultz recalls his mother helping a young girl who was fleeing from an attacker.

“My mom ran to the balcony, we’re on the first floor … I literally watched her grab this woman and flip her over the railing like sack of potatoes,” he explained, noting his mother was still recovering from the back injury at the time.

Schultz said in later years Stuebing’s home burned down while she was out driving community members without vehicles to visit their families.

She was also struck while driving her passenger van by someone running through a stop sign.

He says she was a natural driver, “born with a steering wheel in her hand.

“When her and my father had their own towing and hauling business she ran dispatch, she drove tow trucks, and she did snowplowing. Anything with a wheel she could drive,” he stated proudly.

“My mom was a hero to me for how often she would open her heart and home to those who needed help despite everything she endured.”

Stuebing was known as “Lou” around the village of Clifford, where she ran a business, Kingsway Furniture, with her husband John Stuebing.

Schultz said the business flourished until the early 2000s and John Stuebing passed away in 2003. 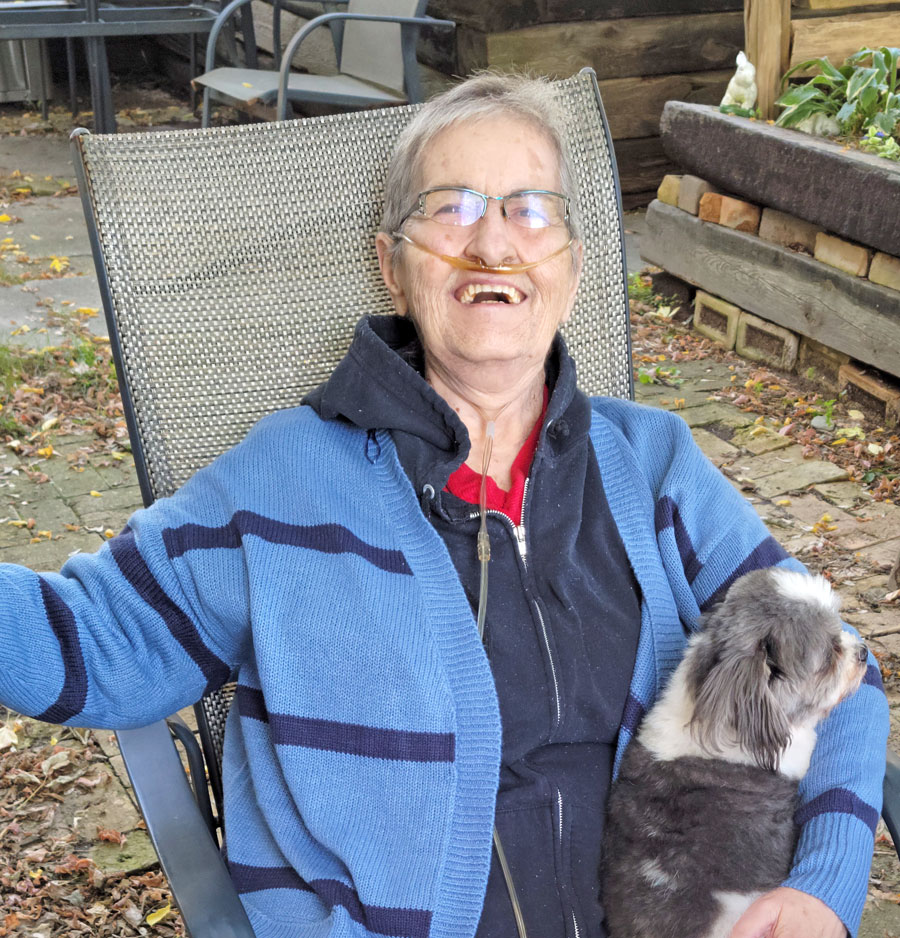 After she was gone, Schultz sought a way to keep Lou’s memory alive.

“She donated her body to science, so there’s no body to bury,” he explained.

Noting “normal was not her way,” Schultz came up with an idea for a different sort of commemoration.

“I was thinking, ‘How do I pay tribute to her?’ And I thought, okay, I’ve seen memorial benches available before elsewhere…

“I’ll just contact the Town of Minto and ask them … ‘do you folks have anything like that?’

“And then very quickly, Minto got back to me and said, ‘Oh, we actually have a program to do exactly what you want to do.’”

Minto’s Commemorative Bench and Tree program was launched in 2021 to “streamline any requests that come to the town for these types of commemorative items,” said town landscape coordinator Paul Judge.

“Although it is likely they will be most often donated to memorialize someone who has passed, the intent is that they can honour or pay tribute to an individual or group, either living or deceased,” Judge explained.

The memorial bench concept also fit in with Stuebing’s concern for others, especially during the COVID-19 pandemic.

“She believed in science, and she believed in doing the right thing and being as safe as possible. And when we were discussing issues, she really didn’t even want to have a memorial or a gathering,” Schultz explained.

“So having a place where people can safely go, when there’s no risk of anybody else around them, just go and say hi, and just enjoy nature, it’s a perfect tribute and a very safe way to do it.”

He added, “I think paying tribute to her in a way that other people can share is a perfect way to share my love of my mom.”

Schultz raised a portion of the $1,500 cost of the commemorative bench through a crowdfunding program and the bench was installed in Clifford’s Cenotaph Park in late June.

Judge said it’s the first, and so far only, bench purchased through the program, which has also resulted in one memorial tree purchase.

However, he notes there have been numerous inquiries about the program.