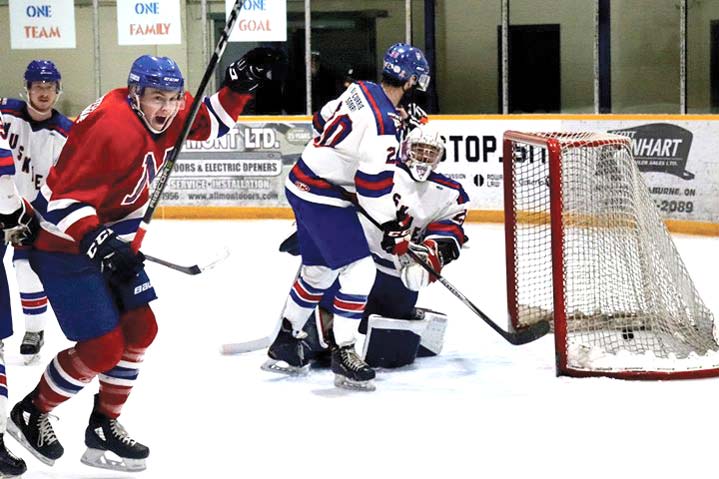 Strikes first – The Minto 81’s continued their winning ways during the first weekend of the WOAA Senior AA playoffs, winning both games on the weekend to take a 2-0 series lead against the Shelburne Muskies in their quarter-final series. Tyler Harrison (in red) of the 81’s celebrates after scoring in the first period of game one on Feb. 7 in Shelburne.
Photo by Stacie Osborne-deBoer

PALMERSTON – The Minto 81’s appear to have a healthy appetite for fish.

The seventh-seeded 81’s, who finished the regular season by winning 12 of their last 14 games, are matched up against the second-seeded Shelburne Muskies in the WOAA Senior AA quarter-finals and, despite being the underdog on paper, are showing no signs of being intimidated.

Game one of the best-of-seven series was Feb. 7 in Shelburne.

The 81’s got things going when Brady Anderson scored only a couple minutes into the game, setting the tone for the night. Tyler Harrison and Jordan Delaurier also scored in the first period, with Shelburne only finding the back of the net once, giving the Trains a 3-1 lead going into the second.

Minto found the back of the net twice in the second, while the Muskies were unable to find the twine.

In the third, the Muskies did their best to get back into the game but were only able to score one goal in the period, giving Minto a 5-2 win.

Game 2 was played on Sunday night in Palmerston and it was a competitive and physical game that saw both teams spend time in the penalty box.

Minto came out strong in the first period scoring four goals, including two by Tommy Hoogaars, with Shelburne scoring a pair of their own to make the score 4-2 after 20 minutes.

Minto’s Francois Cote was the only player to find the back of the net in the second, giving the 81’s a 5-2 lead heading into the third.

Hoogaars completed the hat trick in the third to make it 6-2 Minto. Shelburne was unable to get on the scoreboard in the third, giving the 81’s the win and a 2-0 series lead.

The 81’s look to take a commanding 3-0 series lead on Feb. 15 when they travel to Shelburne for game three at 8pm. The 81’s could wrap the series up on Feb. 16 on home ice when the Muskies come to Palmerston for game four at 7pm.