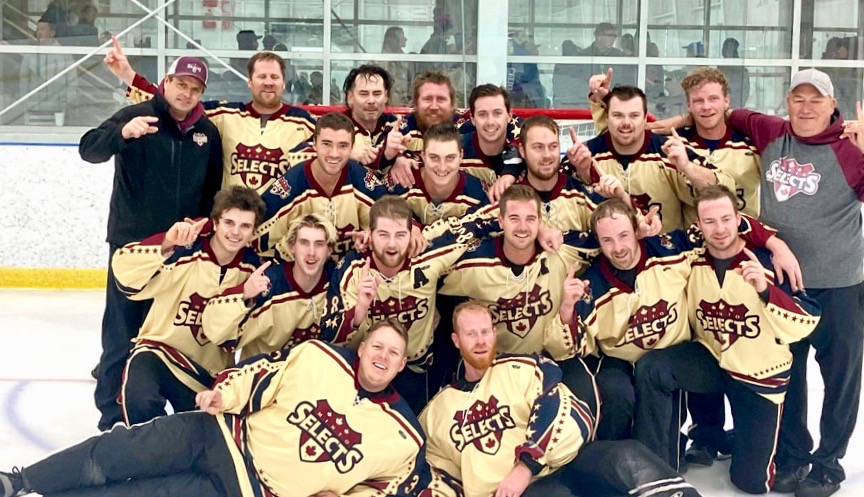 MINTO – The Minto Selects are on top of the broomball world.

The team won the Men’s division at the World Broomball Championships held in Kingston from Oct. 31 to Nov. 5.

The team went undefeated through the tournament, winning six games and tying two, outscoring the competition by a combined total of 20-7 along the way.

“We’re the only team that never lost a game in the tournament,” head coach Archie Wilson told the Advertiser.

“It’s amazing what a room full of team-first people can do.”

The tournament was sanctioned by the International Federation of Broomball Associations (IFBA).

This year’s event featured 36 teams, including 10 in the men’s division, from Canada, the U.S. and France. The tournament also includes Women’s, Men’s Masters and Mixed divisions.

“Sometimes there’s teams from Australia and Switzerland, places like that,” said Wilson, noting the COVID-10 pandemic likely impacted the amount of international competitors from perhaps a dozen countries around the world where the sport is played.

Unlike the provincial and national championships in Ontario and Canada, entering a team in the IFBA World Championships is an application process, rather than a qualifying process.

“You didn’t have to qualify through nationals to get there, although we probably would have, because this same team last April got silver at nationals in Saskatoon with essentially the same core players.

“They’re certainly one of the better teams now probably in the country … to have a silver at the nationals and a gold at the world in the same year, that’s pretty good.”

The Selects finished round robin play with a record of three wins and two ties (ties aren’t broken in the initial round).

They beat the Predators, a Quebec team, by a 2-0 count in game one, edged Lacamobe, a northern Ontario squad, 1-0, and blanked France 6-0, while playing to draws with Team USA (1-1) and Les Boys from eastern Ontario (2-2)

In the quarter finals, the Selects downed the Phantoms from Keady, Ontario 3-1, with Minto scoring into an empty net as a tight game wound down.

A semi-final game against Team Canada (a moniker earned by winning the most recent national tournament) resulted in a 3-2 win for Minto against the Quebec-based squad that beat them for gold at the nationals.

The Selects downed Team USA 2-1 in the gold medal final.

Both the semi-final and final games were decided by shootouts.

The brothers also led the Selects in scoring through the tournament with nine points each. Jordan scored seven goals and assisted on two, while Jeremiah scored five times and had four helpers.

Joe Kealey, with a goal and four assists, contributed five points to the cause.

Jeremiah was also named a first-team all-star for the men’s division as a defensemen, and Wilson was selected as the first team all-star coach.

Selects’ goaltender Cam Dawson, who allowed just five goals over the five games he played (all wins, the most by any goalie in the tournament), was selected as overall tournament MVP.

Gage Gonyou, the other half of the Selects’ goaltending tandem, finished the tournament with a 0.67 goals-against average in his three turns between the pipes.

The Selects are a regular league team, playing this year out of a Seaforth-based circuit, but added a few pickups for the worlds.

“It was our regular team, but you’re allowed to pick up a number of players,” Wilson explained.

“We had some players who couldn’t get the time off work for this, so we had picked up some players.”

New faces notwithstanding, Wilson said the team quickly came together and he credits the victory largely to “the attitude and positivity on the bench, and the focus.

“They played with a lot of intensity, a lot of discipline, but probably more than that, focus … You get a bad call, and people can get a little upset, or twisted and they lose their focus,” he said.

“That never happened the whole tournament.

“I would say it’s one of the better team efforts I’ve seen, for sure, ever.”

With a world title on the shelf, Wilson said the team is returning to league play with a focus on working its way back to the top levels of the game.

“The regionals will be at the end of February and the provincials in March, with a goal to qualify to go to the nationals again a year from now … and eventually win the nationals – that’ll be the goal,” said Wilson.