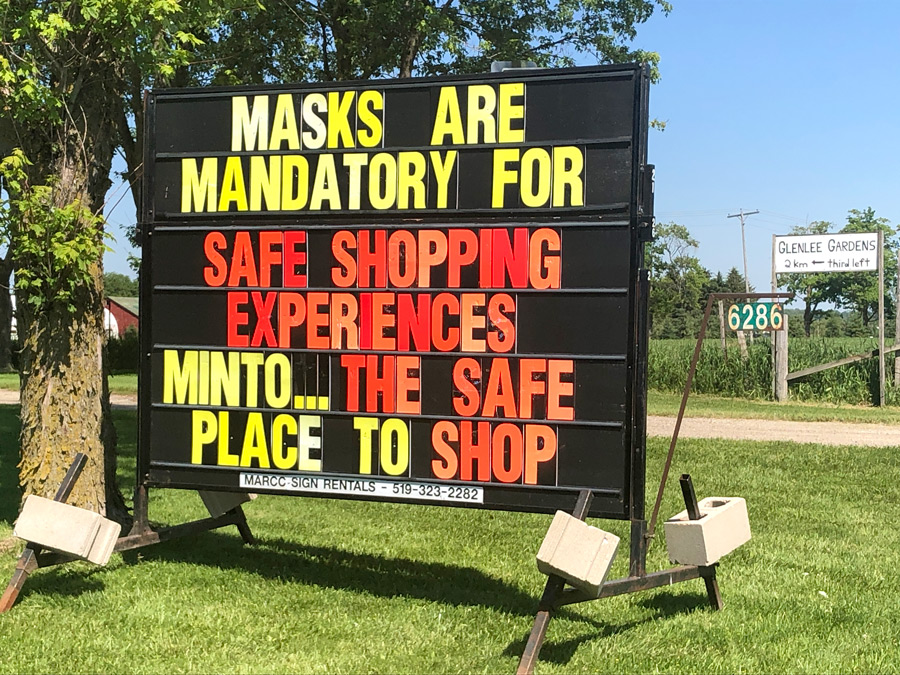 MINTO – The Town of Minto is launching a campaign to encourage loyalty to local merchants and promote the community as a safe shopping destination.

“I’m really proud of our team; we came together Thursday and within a day we had come up with a plan and are ready to roll,” said Wick-Graham.

The Harriston Kinsmen, Palmerston Lions and Clifford Rotary clubs are all stepping up with some funds toward the project, said Wick-Graham, who noted the town will also provide some funding and Mayor George Bridge is looking into a possible county contribution.

Billed as “Locally Loyal Minto” the campaign will involve contests on social media, giveaways and distribution of loyalty dollars. Signs promoting the shop local effort have already been placed at various points around the community.

“Hopefully that will help the business trying to get people to shop local. We’re trying to do what we can,” said Wick-Graham.

Mayor George Bridge said while other public health units in Ontario haven’t made face coverings mandatory, some municipal officials have called for the measure to be imposed provincially.

Bridge said Premier Doug Ford “is a little reluctant,” said Bridge, noting the premier stated, “we don’t have the policing to make it mandatory.”

However, Bridge said, “It’s no different than a smoking bylaw .

“People, if they were told it was mandatory and it’s mandatory across the board, we wouldn’t have the noise that we’re having now.”

Bridge said the mask order has made things more difficult for local merchants, some of whom are just reopening following pandemic-related shutdowns.

“It’s hard on our merchants and we’re going to work very hard,”  the mayor stated. “And kudos to you and your crew, Belinda, for putting a great package together and I think we can really market the fact that we’ll be the safest place to shop around.”

“We can’t stress enough how important it is to support our small businesses,” said CAO Derrick Thompson during the town’s weekly online community update on June 18. “They are absolutely the backbone of our community and they’re working really hard to stay open and keep you safe. So please keep this in mind and remember that wearing a mask is important and protects others around you.”

Wick-Graham told the Advertiser highlights of the program, which will launch the week of June 22 to 26, include:

– sale of Locally Loyal Minto T-shirts, with $5 from every shirt going to a COVID-19 fund to help businesses with PPE expenses;

– formation of a “Spirit Squad” consisting of economic development team members and special guests who will give away Locally Loyal Dollars ($10 increments) that they can spend at local merchants (merchants can redeem the coupons with the Minto Chamber of Commerce for cash);

– shoppers to share photos of their local shopping trips with their masks on at #locallyloyalminto will be  entered to win a monthly prize valued at $100; and

– Locally Loyal Minto masks will be handing out for those who need them.