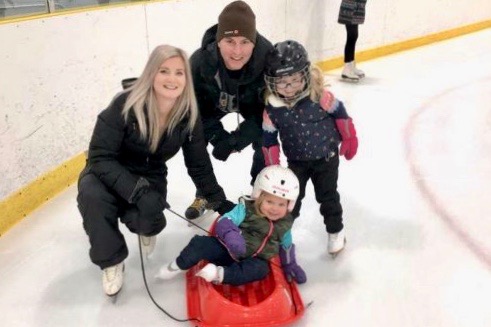 Arenas in Minto will open for ice skating and other winter activities in stages this year. Ice has already been installed in Palmerston, with Harriston installation anticipated by mid-October. Installation of ice in Clifford will depend on demand, states a staff report presented at the Sept. 15 council meeting. Advertiser file photo

HARRISTON – Arenas in the Town of Minto will be opened in stages for on-ice activities for the 2020-21 season.

The ice has already been installed at the Palmerston arena, director of community services Matt Lubbers informed Minto council at the Sept. 15 meeting, held at the Harriston-Minto Community Centre.

“Staff are working towards the installation of ice at the Harriston arena as early as October 2020 and if warranted, at the Clifford arena as late as January 2021,” stated Lubbers in staff report.

“This course of action is for this season only. The situation remains fluid and we are working with the best information we have.”

The report indicates current demand will require two sheets of ice “if certain users can be flexible on location and time.”

If the demand for ice time were to increase towards the end of the calendar year, a third sheet of ice may be needed, Lubbers states.

Groups most impacted by the lack of ice in Clifford would be the Clifford Skating Club, Friday Youth Hockey and the Clifford Old Timers hockey team.

“The facilities in Palmerston and Harriston benefit from having an attached auditorium that can be used as a heated waiting area (and dressing area when needed),” Lubbers explains in the report.

“This will help reduce turnaround time between rentals. They also assist with ongoing physical distancing, as recommended by the health unit.”

The report also notes alternative programming will be pursued from October to December, or as warranted, for the arena floor that will have delayed or no ice installed this season.

“Ideas range from ball hockey for children, youth and adults, to pickleball for adults and basketball for children and youth.”

Consolidating ice rental activity will result in reduced operating costs, but it is being pursued due to the unique situation presented by the COVID-19 pandemic, Lubbers stressed.

“I just want to reiterate that this course of action is for this year only. I know a lot can change in a month and we need to give ourselves and our groups something to work with,” he stated.

Lubber said “if all goes well” the plan is to have ice in Harriston by Oct. 13.

“I feel like there’s going to be some feedback on this,” said councillor Judy Dirksen.

“I don’t think there’s a right answer for this. It doesn’t matter what we do someone isn’t going to be happy, so I think we should be pleading for understanding maybe.”

She added, “I feel like I could sit here and I could argue it either way – it should be Harriston, it should be Clifford. It’s a really difficult thing.”

Councillor Ron Elliot pointed out he was at a Parks and Recreation Advisory Committee meeting on Sept. 14 attended by “representatives from across Minto” and “there didn’t seem to be any dissent.”