Family, friends and representatives of the Town of Minto, the Clifford and District Horticultural Society and various community organizations gathered in Clifford’s Rotary Park on Sept. 26 for a memorial tree planting in honour of local volunteer Bonnie Whitehead. Photo by Patrick Raftis

CLIFFORD – A memorial tree has been planted here in honour of one this community’s most dedicated volunteers.

The tree, in memory of Bonnie Whitehead, was planted in Clifford Rotary Park on Sept. 26 during a ceremony hosted by the Clifford and District Horticultural Society.

Society president Vic Palmer explained the group has a tradition of planting a tree each year on or about National Tree Day (Sept. 21), in memory of one of the group’s former directors who has passed away.

This year the group chose to honour Whitehead, who died on Feb. 10 at the age of 63.

In addition to her work with the horticultural society, Whitehead also volunteered with the Canadian Diabetes Society, Caressant Care long-term care home in Harriston, local youth and seniors organizations, and Knox United Church.

In 2013 she was named the Clifford Lions Club Citizen of the Year.

Whitehead is perhaps best known for providing stories and photographs from local events to area newspapers, as she did for more than two decades.

She was employed during the 1990s by the now-defunct Clifford News and her volunteer contributions continued to appear in numerous local publications, including the Wellington Advertiser and the North Wellington Community News.

“She could write articles like I’ve never seen before,” said Palmer.

“She could take some ordinary thing that we do, flower shows and all the rest of it … something like a spring cleanup, which is something that we’ve always done –  she always arranged that – she could take that and report on it and by reading it, you’d look at it you’d say, ‘This is the single most important event in history … Wow, they’re going to clean up in Clifford,” he explained.

“Bonnie will be missed for all her work in horticulture at both local and District 7 levels,” Bouma stated in the letter.

“She served a five-year term on the District 7 board and continued to cover all annual general meetings and fall district meetings by photographing flower show winners and the newly-elected board.

“She knew how to get members to follow her instructions to capture the time and event. May this tree grow tall and strong to represent Bonnie’s place in the community.”

Minto Mayor George Bridge knew Bonnie from growing up in the community and said she always made him feel very welcome after he returned home following his retirement from the financial services industry.

“And like Vic said, she could take an event and turn it into a world event. And Clifford always has a lot of good events,” said Bridge.

“You can see by the crowd here today, how much she touched people’s lives,” Bridge told the gathering of more than 40 people at the tree planting.

Minto director of economic and community development Belinda Wick-Graham said she “had the of privilege working with Bonnie on many different community committees,” including the Town of Minto Cultural Roundtable, the town’s heritage plaque group and the Clifford downtown revitalization committee. 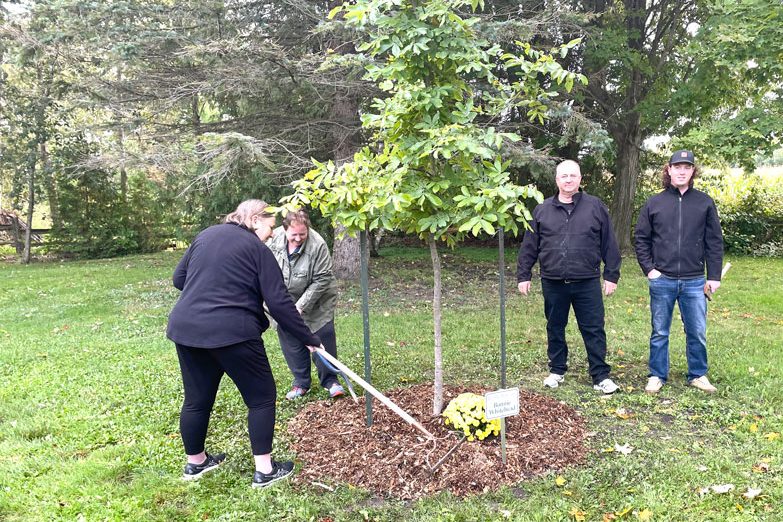 Members of the family of Bonnie Whitehead spread mulch around a tree planted in her honour in Clifford’s Rotary Park on Sept. 26. Photo by Patrick Raftis

“No matter what, Bonnie was there for Clifford and she represented it beautifully,” said Wick-Graham.

“Many of you have noticed our Celebration Square project, it’s just about complete.

“Bonnie provided a lot of input into that, especially around accessibility. And we do have an accessible table in that space and we will be recognizing Bonnie with a plaque on that table.”

“She was always a person you could rely on to do things,” said Duff.

“I think one of our last conversations [was about how] she was organizing one of the elections and all the volunteers,” Duff recalled.

“She was somebody that would step up and do things and that’s what we all need.”

Canadian Diabetes Society volunteer Nancy Dietrich worked with Whitehead through that organization for many years.

“Bonnie had the biggest smile and was the fun of the party whenever there was a party,” Dietrich recalled.

“She was kind and she was thoughtful and she was generous. … and she had a smile for everybody, no matter who they were or where they were … and I think that’s something we all need to take into consideration.

“When you meet someone on the street and you smile at them, that could be the only person that smiled at them that day and that would be Bonnie.”

Audrey Garrett, a member of the Clifford Pastoral Charge, which includes Knox United Church, said Whitehead “will never be replaced.

“She did so many things behind the scenes that nobody ever knew about.”

Garrett added, “She spent hours, stapling newsletters together, taking pictures, teaching Vacation Bible School, playing with kids, just adding supplies to everything that we needed or finding ways to improvise when there weren’t things there that we needed.

“She’s going to leave a big hole in our congregation.”